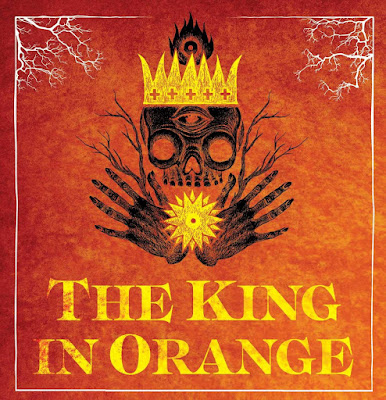 I recently listened with great interest to Miguel Conner’s excellent podcast, Aeon Byte Gnostic Radio, where he interviewed John Michael Greer, the (past?) Grand Archdruid of the Ancient Order of Druids in America, and author of: The King in Orange: The Magical and Occult Roots of Political Power. The book’s title is at the same time a homage to the recently deposed, great robber baron/trickster king, Donald J Trump… and to the 19th century “Lovecraftian” novelist, Robert W Chamber’s book: The King In Yellow.
Chamber’s book is a collection of stories set in his time… where a strange, alternate reality begins to seep into an otherwise “normal” Victorian era existence. The ten stories revolve around The King in Yellow, a forbidden play which induces despair or madness in those who read it. These ten, darkly gothic tales were an inspiration to H P Lovecraft, with several elements finding their way into his Cthulhu Mythos. 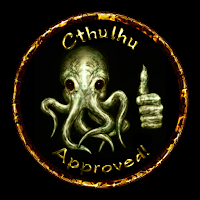 So too has a strange, as yet, ill-defined alternate reality invaded and infested our time. Greer was so struck with the uncanny similarities between The King in Yellow, and the parapolitical events that led up to the 2016 presidential election, he titled his work on the magical and occult roots of political power, after 45… aka: the Orange One.
Having enjoyed Conner’s interview with Greer, I picked up a copy of The King in Orange. The premise of the book suggests that our current political landscape is populated by warring bands of magicians, whose covert manipulations shape our body politic. In reference to the Orange One, Greer examines the rise of meme magic, the Cult of Kek, and it’s memetic avatar/digital deity: Pepe the frog. 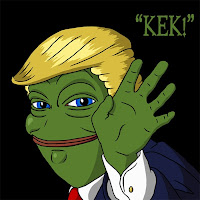 In the runup to the 2016 election, traffic on various imageboard chans was all (a-hem) a-twitter over the anonymous tag numbers that were auto-generated for each post… specifically the synchronistic appearance of repeating numbers, such as 1111, 666, etc. These repeating signifiers, or GETs, as they are called… measured or attested to the potency of meme magic of any specific post. Posts dealing with the Kekian avatar Pepe, were generating large amounts of GETs.
Now it just so happened that posts associated with Trump began to accumulate inordinate amounts of GETs, in tandem with Pepe, leading up to the presidential election. The denizens of Kekistan took notice. The increasingly amassed GETs demonstrated the Kekian magical potency of the Trump campaign. Consequently, the signs and portents of this emerging, increasingly alt-right digital meme magic demonstrated the increasing likelihood of a Trump victory in 2016. 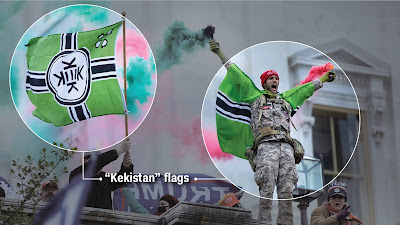 Trump’s victory, as foretold by Kekian meme magic, demonstrated the profound degree of change, away from political orthodoxy toward innovative disruption…  from status quo, to high strangeness. In this regard, the more interesting facets of Greer’s book, have less to do with Trump, and more to do with magical class warfare. Before moving on, it is worth noting that Greer points out that the profusion of GETs in the 2016 campaign, were completely missing in the 2020 campaign, suggesting the Orange One’s reign as great robber baron/trickster king had drawn to a close, from a magical perspective.
“The most important of Giordano Bruno’s magical writings, De Vinculis in Genere (On Bindings in General), identified desire… eros, in Bruno’s Latin prose… as the key to magic. Look at today’s mass-media advertising, Couliano pointed out, and everything you see is meant to manipulate consciousness through images that evoke desire. Advertising and public relations are the magic of today: that was one of Couliano’s core messages.”
- from The King in Orange by Michael Greer
The deeper value of Greer’s book lies in the identification of the communications, entertainment and advertising industries as practitioners of magical manipulation. He outlines how these industries magically shape public perceptions to their advantage. In a previous post, I pointed out that the related field of public relations was the commercial application of military psychological operations, aka: psy-ops or black-ops.
In a much earlier project, circa 2012, I expanded on Greer’s main thesis, in a post titled: Babylon Bandwidth… the term I had given to the propaganda and disinformation output from modern mass media. Through a most egregious and politically incorrect example of cultural appropriation, I lifted the term/concept “Babylon” from the Rastafarian understanding of an oppressive and unjust predator/dominator culture. Rastas use “Babylon” in a very similar sense as to how PKD used the terms “EMPIRE” and “Black Iron Prison.” 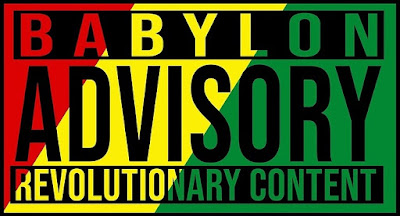 So Babylon Bandwidth represents the insidious and pervasive black-op that is being waged upon mainly unsuspecting populations, worldwide. This black-op, perpetrated by the prevailing predator/dominator patriarchy, is so complete as to be mistaken for our consensual reality. It is devised and developed through public relations, and is activated and delivered through mass media platforms. The key to it’s success is dependent upon the psy-op’s ability to persuade through emotion and desire.
Babylon is tricky that way… it makes you think you actually want the doors of the Black Iron Prison to clank shut behind you.
The Rastas have a magical component of resistance, revolt and liberation from Babylon, whereby they wake up from the illusory spell imposed upon them. Their revolutionary counterstrike is known as “Chant Down Babylon.” This is the Rastas' magical (musical & ceremonial) response to the predator/dominator paradigm. This counterstrike aligns quite nicely with the tactical measures outlined in my Blows Against the EMPIRE series, especially part four. 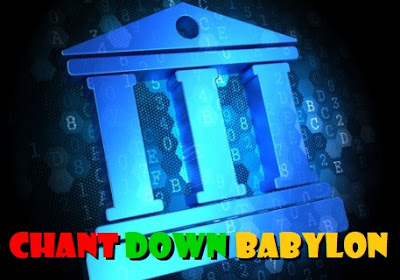 Back to Greer’s The King in Orange: The Magical and Occult Roots of Political Power… his premise is that our socio-political reality can and should be viewed from a magical perspective. Recognizing that the ways in which we are being manipulated are occult in nature... is as reliable a world view as any… especially in these days of high strangeness. Greer’s definition of magic, by way of Dion Fortune, is as follows…

“Magic is the art and science of causing changes in consciousness in accordance with will.”

In these strange days, this is a dependable and actionable position from which to pursue Gnostic self-interest. One of the core principals of Tek-Gnostics is the actualization of self-autonomy as the basis from which to proceed. Self-determination provides a balanced posture of power and receptivity, where maligned manipulations lose their potency and influence over an individual's perceptions. Operating from a position of self-autonomy allows the individual to recognize Babylon Bandwidth as the delivery system of the Black Iron Prison.

“With this knowledge, we look for ways to “break the spell” that the black-media-magicians have cast upon a largely unsuspecting public. We look for the tools and opportunity to push back against mass media programming, while developing strategies to better prepare for an uncertain future. Given the revolutionary and game-changing potential that information technologies put in the hands of the individual, the outlook is increasingly in our favor... if we are willing to fight for it. We move to take personal responsibility for building a better tomorrow.”

- from Babylon Bandwidth I

John Michael Greer’s “The King in Orange: The Magical and Occult Roots of Political Power” is a good read that adds a colorful, insightful perspective to the trials and tribulations of our brave noö world. Although at first glance, it appears to be leaning to the RIGHT, it none-the-less sheds light on the whole alt-right, Q anon craziness we are all still recovering from. Greer’s magical perspective definitely adds fodder to our arsenal of strategies for resisting Babylon Bandwidth and striking Blows Against the EMPIRE.

For it’s unique perspective, I give The King in Orange a rating of 4 out of 5 fnords!

Babylon Bandwidth I
Part one of this series
Babylon Bandwidth
The expanded edition found on our mothership website.
Blows Against the EMPIRE
In five parts
Psy-Wars
Black-ops in Amerika! 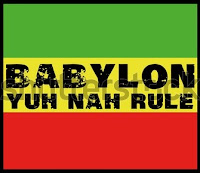 Brings to mind a certain roadtrip to Babylon that I & I took, decades ago... does the term "Third World" mean anything to anybody?

I find it interesting how many different cultural sub-groups have similar tactics of resistance to the dominator paradigm. Shared experiences of cultural oppression breed shared resentment... even if specific responses are culturally varied. the EMPIRE Never Ended, regardless of demographic.