Hoax – noun
1) To trick into believing or accepting as genuine something false and often preposterous.
2) Single most-used word by the 45th president of the United States.
3) Favorite subterfuge term used in American Psy-Wars.
Part 1 - Battle Lines
Having recently posted on the nefarious exploits of that darling of the Alt-right: QAnon… and given the dramatic acceleration and outright promotion (by the Trump administration) of armed, right-wing militias, roaming the streets of U.S. Cities…  what is obvious to some, is rapidly becoming obvious to all. What has, until recently been a covert, domestic targeted cold-war… is fast becoming hot.
As troubling as (insignia-less) Federal troops in the streets of Portland, Oregon was, with the (seemingly) subsequent occupation by Proud Boys militias… as disconcerting as the spread of the deployment of unmarked federal troops to other cities was… it has gotten worse. 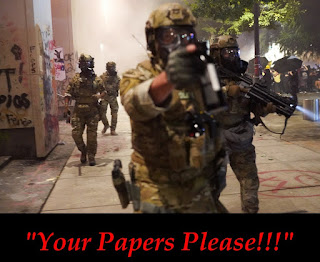 The night after we posted QAnon: Alt-Right MindF#@k! …three protestors were shot in Kenosha, Wisconsin. This was the third night of protests after a Kenosha police officer shot Jacob Blake in the back, seven times. The perpetrator was 17 year-old Kyle Rittenhouse, who has since been charged with six felonies, including first-degree intentional homicide. Rittenhouse’s violent acts suggest his susceptibility to radicalization by Alt-right, white supremacist propaganda.
Since August, the proliferation of White Nationalist militias, such as the proud boys, the boogaloo boys, and the Wolverine Watchmen have been aided and abetted by Donald “Stand By” Trump. During the first 2020 presidential debate, when given the opportunity to denounce white supremacist groups, the president not only did not do so, he dog-whistled that said groups should occupy polling places and intimidate voters by “watching the polls very carefully.” Not so subtle.
On October 8, 2020  Michigan Attorney General Dana Nessel announced felony charges against seven members or “associates” of the wolverine watchmen, accusing them of making threats toward officials and supporting plans for terrorist acts. The alleged plot included plans to attack the Capitol and/or take Michigan Gov. Gretchen Whitmer hostage, to put her “on trial.” In the aftermath… Trump, who encouraged the anti-shutdown protests in Michigan earlier this year, renewed his criticism of duly elected Whitmer and her policies.
The systematic hollowing out of our Federal Government results in, among other things, the snatching of Government officials off the street and either murdering them or putting them on trial. In the case of the later, the resulting guilty verdict allows the militia to pass the death sentence on the official, for crimes against “the State” (read: their faction). Either way, the end result is the same. This is a standard tactic in any banana republic, such as the currently hollowed United States of Amerika. 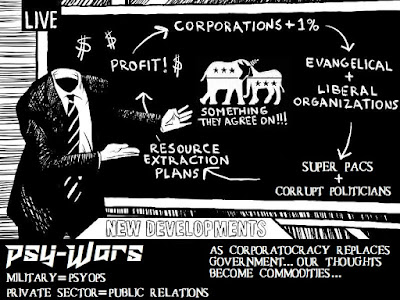 The common denominator of all the above has been driven and accelerated over the last two decades by a relentless PSY-WAR, targeting general (and specific) populations... Psychological warfare, or the basic aspects of modern psychological operations (PSY-OPS), have been known by many other names or terms, including… Military Information Support Operations, Black Ops, political warfare, "Hearts and Minds," and of course… propaganda. The term is used... "to denote any action which is practiced mainly by psychological methods with the aim of evoking a planned psychological reaction in other people" (Wikipedia).
Historically, covert Psy-Ops typically precede overt military operations.
“Psy-Ops” or Psychological Operations is an ancient art, but in its modern form, goes back to WWI. In 1918, A Propaganda Sub-Section was established under the AEF’s (American Expeditionary Force) Military Intelligence Branch, within the Executive Division of the General Staff. We consequently think of Psy-Ops as a covert military operation. However, especially in western democracies, modern Psy-Ops are becoming predominantly a commercial product, serving the corporatocracy.
This commercial product and it’s industry is commonly referred to as: Public Relations. Within the industry, they refer to their primary product (their “killer ap”) as: Perception management. Increasingly, Psy-Wars are moving out of governmental and military realms, and into the private sector. This follows the marginalization of once-legitimate governmental entities, and the increasing domination of corporate entities.
Companies such as Cambridge Analytica, and its parent company: SCL Group, are particularly glaring examples of commercial PSY-OP providers. Cambridge Analytica (now defunct) referred to themselves as a… “global election management agency.” These companies got their start by contracting w/ the US and British military, in their War on Terror campaign, launched shortly after the 9/11 attacks.
Cambridge Analytica collected intel on their target population via data mining. In this case, the data set was personal data, gleaned from social media sources. They built profiles based upon a person’s facebook “likes” history. This intel was for sale to the highest bidder, and Cambridge Analytica ended up working for the Trump Campaign of 2016. 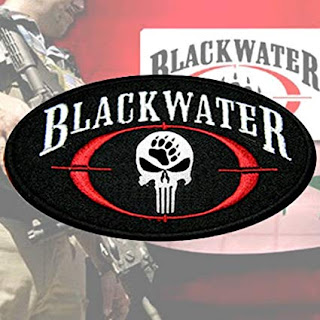 As the corporatocracy assumes ever-more control, as the covert (cold) Psy-War turns hot, corporate need for military capability grows. In 1997, Erik Prince founded the private military company: Blackwater. After the deadly debacle in 2007, where a group of blackwater mercenaries killed 14 Iraqi civilians, Prince “re-branded” Blackwater as: Xe Services, commonly known as: Academi.
In 2014, Academi was bought out and became part of Constellis Holdings, Inc. …an American private security company that provides integrated security, mission support and risk management services to corporate, government, and NGO clients.
A major funder of Cambridge Analytica was Robert Mercer… Billionaire, Republican funder, Trump supporter and, quite coincidentally, an early AI researcher. Much of my sourcing for these parapolitical hijinks, comes from non-other than the ever-reliable Recluse, from the VISUP website. A detailed exposé from 2019 can be found here, dealing with the financial backing of the Alt-Right-leaning PSY-WARS. Although somewhat dated, here is a taste from Recluse’s research…
“When it comes to financing the far right, it falls upon individuals such as Peter Thiel, and families like the Mercers and the DeVos-Prince Klan. The Mercer and DeVos-Prince families are closely aligned, being among the wealthiest backers of the highly secretive Council for National Policy (CNP). And like Thiel, the Mercer family are also major patrons of the alt-right. Indeed, the Mercer family became the largest financiers of Breitbart in 2012, upon the death of the founder. It was through Breitbart that the Mercers came into contact with Steve Bannon, Kellyanne Conway, and Milo Yiannopoulos, all of whom they became patrons of.”
Note the mention of the Devos-Prince clan, which brings us back to the new corporate entities that provide the on-the-ground muscle for not only private (para) military operations… but more importantly the covert PSY-OPS that now permeates our increasingly on-line culture. These private security corporations are essentially drawing the battle lines of the current PSY-WAR, being waged across the globe.
In part two of this PSY-WAR series, I will take a deeper look at how the PSY-WARS have infiltrated and essentially hijacked what we call the conspiracy culture internationale. What was once a niche bloc of investigators and research enthusiasts, has been co-opted by corporate operators. But why would such entities with global reach even bother with such a disorganized, decentralized coterie? Stay tuned… 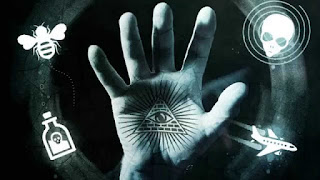 Scary Monsters, psycho freaks, Keep me running, running! The pod-cast with Vissup/Recluse was very enlighting about the right side of the pyramid and it's ship of fools. Jack Heart is in this struggle. Your Gnosis is profound.
In some ancient faiths your antagonist is welcome. It makes you learn on how to view anger, and find oneself positive/healthy outcomes.
So much trouble in this world. To shine forth is key! 87

When all you have is a nail everything starts to look like a hammer. Or what happens when the establishment appropriates Dadaism. A movement created in exile from nationalist governments and their stratagems in world war one. They stole our nonsense and now were stealing it back!

Similar roots, different outcomes. A Cubist hammer looks like a stormtrooper... Nationalist clowns are still bafoons, even thou the curtain has been ripped away. Who's yer Dada?

The nationalist clowns still have people holding on to their granfalloons for dear life. A sphereist hammer looks like a bathysphere which is like a negative balloon. If the water should cut my line, set me free, I don't mind.

I was writing a comment and it disappeared -user clumsiness most likely!
Here is what terrifies me more than a anything: Both fake sides of the political spectrum only see the reality they want to see. In your blogpost, as great as some of it is you fail to mention that left wing (identity politics) thugs and terrorists already roam the streets of many USA cities and have caused death,countless injuries and huge dollars of property damage.

BLM has caused many many black owned businesses to be shuttered and in many cases they aren't going to come back. All in the name of the people they claim to protect and represent! Don't get me started on the massive stupidity of "defunding the police" and what that has done to poor inner city blacks! But anyone who reads this,even if it's just one person, look up the stats on it by all means. Killing by police vs. killing by same race, same neighborhood killers.

For those supposedly against fascism, Antifa seems to have learned from the best as they are every bit as fascist as the Boogs, Wolverines etc.
Take note that fascism is simply the marriage of business and politics. Not good at all but it was Hitler who added the Jewish/racial genocides to the equation.

And Antifa's paymasters are hugely wealthy capitalists--or at the very least, people who did beautifully under capitalism and don't want it for others!

I think Cohen was right when he said "the future is murder", Jeff Wells at Rigorous Intuition was right when he said "They have won completely. And because there will never be universal agreement as to who "they" are their victory is all the more complete " the Wells quote is paraphrased a bit I think. Couldn't find exact quote. Highly recommended reading for anyone is Jeff Wells' "Rigorous Intuition: What You Don't Know Can't Hurt Them" published in 2008!

But yeah, right-left March on everybody and never ever think for yourselves.
Winning. Just effing great--"winning" we may all get very tired of it. Tired unto death even!

Thanks for your (left handed!) compliment. I appreciate that you feel “some“ of my post is great! In this post I focus more on Right factions, simply because the Right is more sophisticated and more successful in using PSY-OP tactics. As a decentralized as the Left is, the Right is just as focused in the waging of the PSY-WAR.

By the way, the term “identity politics” is a classic PSY-OP phrase...

That wasn't by any chance Schrödinger's cat, was it?

I'm not sure who's cat it was but the vase which broke was Plato's ideal form of a vase. No actual vase was damaged.