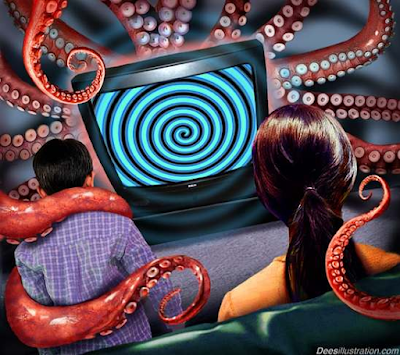 The human experience is, to an ever increasing extent, being mediated by various information technologies. Indeed, the last 500 years of human history has been defined by breakthroughs in media. The printing press, the telephone, motion a pictures, television, personal computing & the internet, cell phones & wireless devices... and most recently social media... have all “come between” humans and their desired data. These information platforms deliver our “content” with ever increasing immediacy. As this content is now instantly made available, our attention turns to those in control of content and its flow.
Modern media, defined here as the communications, entertainment and advertising industries, are suspect in that they dictate the content being delivered to the public. Media moguls within the entertainment industry control content, who in turn are influenced by advertising agencies that (along with their clients) bankroll the production costs of entertainment programming. Communications companies deliver, via their networks and a tech-driven array of wireless gadgetry, data rich content, created to a great extent by the entertainment industry. 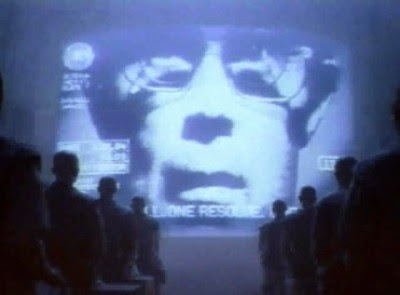 This powerful media triad... communications, entertainment and advertising... secure political favor through the power of the lobbying industry, which controls our government. As opposed to other powerful industries seeking influence over our government such as Big Oil, the media triad's commodity is essentially the manipulation of the content of people's minds. Seeing an opportunity, our government seeks a “Quid pro quo.” As such, these industries wield enormous power and influence and cannot be trusted by virtue of the age-old adage that absolute power, corrupts absolutely.
Take television. There is a reason why TV executives refer to shows they produce as “programming.” There is a reason why advertisers pay small fortunes for commercials and for product placement in films. Their intention is simple. They desire to program the masses to do their bidding. Overtly, they want the masses to buy their products... but covertly... they want the masses to think the way they want them to think. They want people to think like good consumers. These masters of the airwaves will stop at nothing to broadcast their disinformation... to impose their version of reality to suit their nefarious agenda. This deceptive content of control we label “Babylon Bandwidth.” Here is a subtle and formidable adversary.
There is, however a major outcome of this “content” that is not completely controlled by the media masters. This is the all-important phenomena known as “popular appeal.” Although each agency controls their individual output, it's relative success or failure is dependant upon how it is received by the public. To be effective, output must be popular. To be popular, it must resonate on a deeply emotional (perhaps even spiritual) level with the masses. Try as they might, the media masters cannot consistently predict or control popular appeal. Consequently, each individual media mogul is forced to react... to constantly re-adjust their messaging, in response to popular sentiment.
Popularity is an intangible and more importantly, an ineffable commodity. If enough people are enamored with a media phenomenon... for a long enough period of time... it becomes a trend. This is of course the “holy grail” of the media industry. Since advertising effectiveness and hence advertising revenue is dependant upon mass appeal, significant research and development resources are budgeted to study such trending. For this reason, the collective output of the media industry is significant on a cultural level, as it mirrors the culture being targeted.
Close examination of the combined collective output of modern media tells us much about our global citizenry. By virtue of what is being marketed to us, modern media reveals perceived trends in how we think, feel and react to events of consequence in our world. Indeed, it illuminates collective characteristics of our consensual reality… our collective consciousness, as reflected by the manipulations of the above mentioned media masters. In this regard, popularity of media output becomes an indicator of what resonates, what “grabs the attention” of specific, or in the words of the marketing magicians... “target” populations. By scrutinizing how we are being marketed to, we gain more insight into who we are as a culture.
By waking up to Babylon Bandwidth, we begin to understand the extent of media manipulation... we begin to realize “how deep the Rabbit-hole goes.” 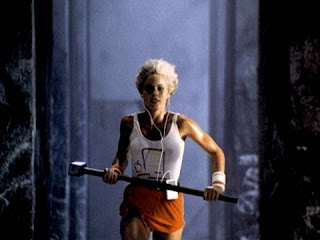 Today, as information technology evolves more rapidly, the media masters begin to lose control of the medium. Social media has to a certain extent, de-centralized modern media, diluting Babylon Bandwidth's hypnotic power. The perceptive and vigilant citizen can, in effect, use modern media to their advantage by gleaning trends in the media-stream. In considering trends, specific pieces of media content lose importance. In the words of Marshall McLuhan... the medium is the message… a medium itself, not the content it carries, becomes the focal point of significance. Realization of these trends allow us to sharpen our predictive faculties in contemplating the future.
With this knowledge, we look for ways to “break the spell” that the black-media-magicians have cast upon a largely unsuspecting public. We look for the tools and opportunity to push back against mass media programming, while developing strategies to better prepare for an uncertain future. Given the revolutionary and game-changing potential that information technologies put in the hands of the individual, the outlook is increasingly in our favor... if we are willing to fight for it. We move to take personal responsibility for building a better tomorrow.
We do not expect assistance from institutions of the old paradigm. The old guard will hold on to power as tightly as they can… as they always do. Maybe this is the way it should be. For it is the responsibility of each generation to wrestle the ring of power from the gnarled hand of the old guard.
Come we go burn down Babylon one more time…
Men see their dreams and aspiration… a crumble in front of their face.
And all of their wicked intention… to destroy the human race.
With music… mek we chant down Babylon…
So come we go chant down Babylon…
Come we go chant down Babylon… one more time.
- Robert Marley
Babylon Bandwidth II
Posted by Jack Heart at 4/11/2012 11:36:00 AM
Email ThisBlogThis!Share to TwitterShare to FacebookShare to Pinterest
Labels: Apocalypse, Eschaton, Futurism, Holy War, Media, Politics

I watch less and less of the entrainment. Power to the people! Right on! The Ghost in the machine will be personified! Shine forth! Dennis