The Cult of Kek & the Law of Eights

As many of you know, the Cult of Kek is an online meme magic cult, prominent on imageboard websites such as 8chan (aka: Infinitechan, as 8 is infinity spelled sideways!). The 8 chan imageboard is composed of user-created boards, each one moderated by its respective creator, with minimal interaction from any site administration. Meme magic is a term used to describe the growing power that internet memes have on the fabric of reality. Interpretations of Meme Magic have ranged from pragmatic use to esoteric dogma to a mutating form of Chaos Magick.

The term meme magic was coined on the imageboard 8chan and soon thereafter gained popularity on 4chan /pol/ board as well. On 8 chan, the character Pepe the Frog is depicted as a modern avatar of an obscure, archaic deity who uses ancient Egyptian meme magic to influence the world, often by fulfilling the wishes of posts that end in repeating numbers.

The constant memeing of Trump and Pepe is believed (by the adherents of the Cult of Kek) to have awakened the ancient Egyptian deity Kek, that represents Chaos and Darkness. They believe that Kek began communicating with them through GETs, which are numerical stamps, ending in repeating numbers on chan posts. GETs are seen as a good omen within the 8chan community.

Per the Know your Meme website, the Cult of Kek… also known as the Church of Kek… is an alleged satirical religion based around the worship of the ancient Egyptian deity Kek (also spelled Kuk or Keku), an androgynous God of darkness and chaos who is often depicted as a frog or frog-headed man in male form or a snake-headed woman in female form. Practitioners are known to frequently write “praise Kek,” and jokingly refer to the church as a “religion of peace.”

During this time, the memetic phenomenon took a distinctly dark turn with the appropriation of Pepe/Kek by factions of neo-Nazi fascists who began depicting Pepe reading Mein Kampf, Pepe sipping from a swastika teacup, etc. Who knows what bizarre sequence of events attracted these white nationalist trolls to Pepe… perhaps the malevolent Kek deity, awaking from its primordial slumber, called to those who were susceptible to its manipulation… to its darkness?

In these strange days of high weirdness, the unlikely probability of an ancient Egyptian deity, hoping in… toad-like… from mists of time, from the fringes of reason, to influence the very fabric of reality… is sadly not as outrageously astounding as it would have been even a decade ago… is it?

Before proceeding, Tek-Gnostics dismisses, out of hand, all racist, neo-Nazi stupidity as hateful to humanity and counter-productive to our purposes. We have no time or patience for such tomfoolery.

With that said, when the Cult of Kek first appeared on our radar, we immediately began to notice the synchronistic entanglement between this meme magic cult and the anciently occurring, yet pervasive “Law of Eights” that informs Tek-Gnostics. The first sync to catch our eye was its inception on 8chan. This “8” inference triggered an in-depth investigation by our vigilant R&D team. Digging deeper, the Eights kept coming…

Kek, it turns out, is the deification of the concept of primordial darkness (kkw smꜣw, keku-semau) in the Ancient Egyptian Ogdoad cosmogony. In the oldest representations, the androgynous Kek is given the head of a serpent, or of a frog, dependent on the masculine or feminine form. In the Greco-Roman period, Kek's form was further defined with the male form depicted as a frog-headed man, and the female form as a serpent-headed woman… as were all four dualistic concepts in the Ogdoad. 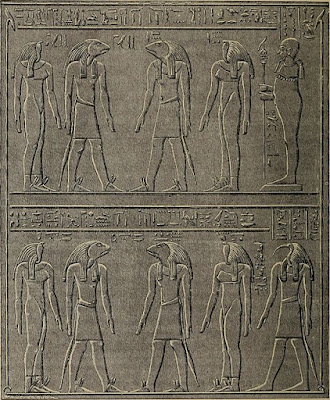 In Egyptian mythology, the Ogdoad (Greek ογδοάς "the eightfold", Egyptian Khemenu, Ḫmnw) were eight primordial deities worshiped in Hermopolis during the Old Kingdom period in the third millennium, B.C.E. The Ogdoad existed before the emergence of any subsequent beings. They took the stylized form of husband-wife pairs: HUH and HAUHET, the rulers of infinity, KUK and KAUKET, the rulers of darkness, NUN and NAUNET, the rulers of primordial waters, and the secretive AMUN and AMAUNET, who rule hidden things.

One of several associated, anciently occurring creation myths state that a lotus flower emerged from the waters of "the Sea of the Two Knives" (a lake near to the temple in Hermopolis). The petals opened to reveal Re who then created the world. A variation on this myth held that a scarab beetle (Khepri - the symbol of the rising sun) was revealed when the petals opened. The scarab transformed into a young boy whose tears formed the first human beings. The boy is generally considered to be Nefertum (young Atum) but once Re and Horus had been merged as Re-Horakhty the boy was subsequently considered to be the infant Horus.

The evolution of the Ogdoad from prehistoric Egypt, to its association with Horus, illustrates the unbroken chain of ancient cosmologies as their pre-existence moved through Egypt and Babylon, into the Mystery Cults, to more recent religious mythologies, secret societies’ all seeing eye, etc.

“During the development of our intelligence engineering systems, certain synergies, certain commonalities in structure began to emerge. Seemingly divergent disciplines such as philosophy, mathematics, and music demonstrated similarity in descriptive organization. The overarching synchronistic principle that arose, as if of its own accord, is what we term the: “Law of Eights.”

A most profound example of the Law of Eights can be found in the ancient oriental divination system known as the “I-Ching” or “Book of Changes.” At first glance, the I-Ching is simply a book of divination. However, upon scrutiny, deeper, timeless connotations emerge. The text of the I-Ching consists of 64 glyphs or “hexagrams” composed of six stacked lines (configured in two trigrams), either solid or broken, which serve as a binary code system. Each hexagram is accompanied by a concise oracular statement or commentary. This commentary essentially interprets the exact moment in time, wherein the hexagram was generated.

There are many oracular tools that can achieve synchronistic results. However, the nature of the 8x8 or 64 grid that is the I-Ching, functions in synergy with (Leary’s) eight circuit model, incorporated within the Tek-Gnostics system. Like the myriad other eight-based systems, such as the octave musical scale, the Taoist eight Bagua, the classic 64 square chess board and even the DNA genetic code, the I Ching aligns in the eight-fold format. Thus does the “Law of Eights” permeate human philosophic history, as well as inform modern science.

So it is that the new “Law of Eights” mutate and expand, perhaps exponentially, into our shared future. Just as the Buddha rediscovered the noble eight-fold path, so do we rediscover, add to, and pass along these profound tools of consciousness to the next generation. Who knows what form the ancient law of eights will take… the next time around.”

It didn’t take long for a new mutation of the Law of Eights to emerge… to impose itself upon modernity. The emergence of this strange, viral web-based Cult also demonstrates the potential chaotic energies of humanity’s archaic, unconscious… boiling just beneath the surface of modern normality. It apparently doesn’t take much to tempt these dark energies to rise. The ancient powers, it seems, are not dead and gone… but lurk in wait for the opportunity to re-establish the old, pre-pagan ways... darkness, darkness.

In a bizarre turn of events, it has been reported that Pepe the Frog, the fictional amphibian that had been possessed by the ancient (and sinister) Kek, has died. Drawn into creation in 2005, he passed away tragically at the hands of his creator, artist Matt Furie, on Saturday, May 6th. An exorcism gone terribly wrong, perhaps? Now that Pepe has met his demise, it will be exceedingly interesting to see what avatar emerges from the digitally primordial ooze of 8chan and other such imageboards. 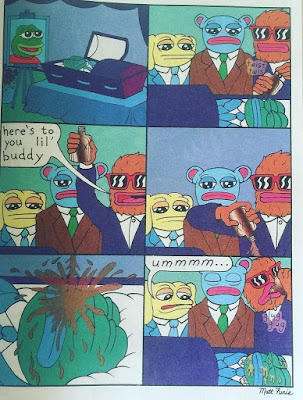 One final thought on this and other unsettling emergences… manifest universe appears to be a balance of opposites. The whole yin-yang thing. Having been born into this universe, we are obliged to contend with duality. One self-evident aspect of Universe, is... along with light, comes the darkness. To occupy a sentient body in 3-dimentional space-time necessitates that universe be dual in nature: Light/Dark, Yin/Yang, Observer/Observed, etc. It would not be possible to bask in the warmth of light without the contrast of the shadow of darkness.

In these strange days remember… darkness is but a shadow cast by the light.

Life is strange… take it as it comes. There is enduring wisdom within the Law of Eights. This ancient system seems to have withstood the test of time. Embedded within this archaic system, there are clues that help illuminate the dualistic nature of Universe. Thus does the primordial binary system further articulate to an eight-fold template. Whether it’s the 8x8 I-Ching oracular system or the lucky 8-ball… the Law of Eights continues to manifest.