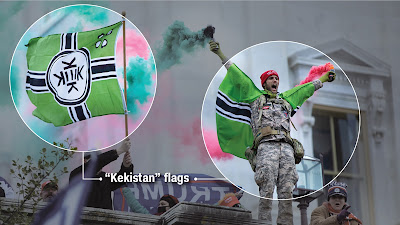 Much has transpired since January the sixth, 2021. One year ago, we reported on the Great Robber Baron/Trickster King’s last, desperate gambit to remain in power. Having exhausted all other options, the Notorious DJT unleashed a mob of loyal supporters on the U S Capitol Building, in a reckless and violent attempt to disrupt the electoral vote count that would formalize Joe Biden’s victory.
To have an outgoing President attempt to thwart the peaceful transfer of power to a duly elected successor, would/should normally trigger a three-alarm wakeup call that something deeply nefarious is a-foot… but these are not normal times. Remarkably, the clarion call that did sound, was ignored by a large segment of the general population. Here, on the one year anniversary of that day of infamy, is the strange-but-true outcome…
To date, one third of the American public realizes and recognizes that election day took place on November the third, with a violent insurrection taking place on January the sixth. One third of the Amerikan public is confident that the insurrection occurred on November third, and a patriotic protest took place on January the sixth. While one third of Americans are no longer sure what the hell took place. Yes, dear reader… it has come to this.
So how did (at least) two separate realities take simultaneous hold, in these once United States? The simple, yet profoundly disturbing and ill-omened answer is this… January the sixth, 2021 was an indicator event, illustrating the pervasive success of (at least) two, factionally driven, MindF#@k! Operations. These two insidious operations have infiltrated and mesmerized large portions of the American public. The subsequent twelve months have essentially proven this disturbing proposition to be true… or “truthy” if you prefer.
Since January the sixth, we have witnessed the consolidation of power and persuasion of these two factions… as orchestrated by the perpetrators of two competing, well organized and well financed psychological operation campaigns. These psy-ops have been in play since at least 2015… at first quietly, then loudly, and finally outrageously… gaining momentum.
One psy-op, or Operation MindF#@K! (OM!) as we like to refer to them… seeks a return to the status quo and a (perceived) sense of political normalcy. This is in response to the Notorious DJT’s successful demonstration of, not only his own apparent grift… but of just how dysfunctional political systems have become. The perpetrators of this OM! seek to stabilize the prevailing, bureaucratic orthodoxy that has served them so well since (at least) WWII.
The other OM! seems hell-bent on replacing our representative, democratic-republic form of government, with autocratic rule, as the perpetrators see no other viable path forward for remaining in power. Changing demographics spell doom for their grip on power… unless they act decisively to disenfranchise these evolving, and more diverse communities.
Two-thirds of our citizenry have accepted one or the other of these two cabal’s OM! as fact… as an actual representation of reality. We hereby identify these two extreme, competing factions as: America vs Amerika. The America faction hobbled-together a resistance movement that would hold together long enough to evict DJT from the Whitehouse. In response, the Amerika faction rallied around a “stop the steal” campaign, resulting in the indicator event of January the sixth. 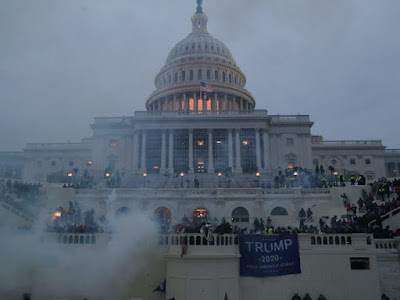 This leaves one third of the population scratching their heads in perplexation. The middle third of the American populous might be identified as: America? It is quite likely that the middle third, or the America? faction considers both extreme factions, to be batshit crazy. So it is in the spirt of tolerance… in the spirit of  “walking a mile in another’s shoes” …in the spirit of open mindedness, that we propose the following thought experiment.
Thought Experiment # 2
If you are a member of the America faction, try to understand the misgivings and suspicions of the Amerika faction. Try to consider where facets of their argument might be true. For example, Amerikans are concerned that that their way of life is slipping away from them. This is true. The changes in demographics are trending toward a more diverse population. Automation continues to absorb jobs that once were performed by people. These changes are coming, regardless of ideology.
If you are a member of the Amerika faction, try to understand how belief in QAnon and a sinister pedophile deep-state cabal might sound crazy to the America faction. Try to consider where facets of their argument might be true. For example, Americans consider the allegations of mass voter fraud in the 2020 elections to be, not only false, but thoroughly proven false by the 80 or more failed lawsuits that were consistently struck down by judges (many appointed by DJT) across the land. This is true. The 2020 election has been scrutinized by the Right, including the likes of the cyber-ninjas, and found to be secure.
If you are an Amerikan, not all of your friends across the aisle are “sheeple” or “snowflakes.” If you are an American, not all of your friends across the aisle are “crazy paranoids” or “deceived dupes.” Sure, some are… in both cases… but there are always a few wingnuts in any cabal. The majority of folks in both camps want to live cohesively with their neighbors. It is important to remember that the perpetrators who wish to divide us... are not most folks.
Those perpetrators who orchestrated the two, pervasive MindF#@K! Operations do not have our best interests at heart. The perpetrators, both autocratic and bureaucratic, both Amerikan and American, likely serve the same master. Even though the Notorious DJT was advertised as a champion against the deep-state… even though his resistance was advertised as a return to liberty… both factions have a dark side. Both, each in their own fashion, seek to preserve the predator/dominator paradigm.
But not is all doom and gloom, here in the broken promise land. There is a large and growing segment of the U S population… likely from the America? faction… who are wise to the OM! of the perpetrators, Right and Left. This growing segment of the population sees the predator/dominator paradigm for what it is… oppressive exploitation. And they are withdrawing their support of such, in droves.
The legacy press has labeled this phenomenon as: The Great Resignation.  As we speak, there is a movement… an exodus away from slave-wage jobs, across the country. Increasingly, people see through the OM!, both Right and Left, and are quitting their 9 to 5 existence, for something more meaningful… for a shot at life, liberty and the pursuit of happiness… as advertised by the founding fathers.
As we move forward… it will be extremely interesting to see what these newly emancipated slave-wagers are going to do with all their free time… Stay Tuned!
"You have a Republic, if you can keep it."
- Benjamin Franklin
Posted by Jack Heart at 1/06/2022 10:07:00 AM
Email ThisBlogThis!Share to TwitterShare to FacebookShare to Pinterest
Labels: MindF#@k!, Politics

Joker Trump was replaced by Joke crackin' Biden (backed up by joke Kamela waiting in the wings), but prior to Trump there was Obama - fond of presenting himself as a laid back cool customer with a charming sense of humour, before him Dubya - a monkey always making a fool of himself, Slick Willy - caught with his pants down so to speak, Bush Snr. so unfunny it was funny, Reagan being a Hollywood actor would have been used to wearing make-up for the cameras, Carter a peanut farmer, the one before him so memorable the name escapes me - but wheeled in to fill the embaressing gap of his predecessor, & before him "Tricky Dicky", LBJ - "Johnson" = "dick" = idiot/fool... 60-odd years of clowns as CIC!

The predator culture is an American idiot. Looking back not so far in the past, wars/ MILITARY. The largest defense bill in history! 25 billion more than asked for! Largest ever!
Homeless, most ever. Corporate grifts, most ever. Let's take care of our people first. Nature is the intelligence that we depend on. Let's shine forth with nature. 87

so if you quote franklin on that matter, it might be a bit late. .)

Thanks for your comments. You illustrate a couple of interesting propositions. "9/11 as coup" …demonstrates a simplistic, single faceted theory. Like a so-called "deep state,” the "truther" paradigm seeks simple answers and blames cartoon villains. The predator/dominator paradigm is a far more nuanced and multifaceted conundrum. It cuts both right and left, infesting susceptible conservatives and liberals alike. 9/11 was an “indicator event” that was decades (if not centuries) in the making.

Figuratively, you have to ask yourself… is this reasoning issuing from the Amerikan faction?

Your quandary as to whether it is too late, is a more pertinent, philosophical question. Is it ever too late? Is it naïve to aspire to principles of democracy, regardless of the hour? This isn't easy to answer, as the heros and villians appear to exchange roles as the tale's plot continues to unfold.

Democracy isn’t perfect or fashionable, but are the alternatives worth fighting for? Again… Amerika?

it took your 'founding fathers' an entire new continent to start their republic. there is no space left for a second try.

Per your (if this is indeed you) earlier point... It may not be so much a question of space, as time.

the U.S. was founded on the idea of separating from old europe, from feudalism and from religious totalitarianism. all this stuff sneaked back to it by now. an 9/11 was a major catalyst.

the U.S. was the 'land of the free' vs. the 'land of the owned' (europe back in medieval). corporations are the new princes and even prisons are privatised. people live in fear of poverty and so they submit. this is a feudalism that does not rely on formal possession. one can't escape the rules of the owners.

Agreed. The predator/dominator structure remains intact, ie: The EMPIRE Never Ended... Curiously, modern surveillance and communication technologies facilitate a return to feudalism, ie: The Dark Enlightenment. I guess if we want this tech to help us with the pursuit of happiness... we are going to have to work at it.