Is QAnon a LARP gone wrong? 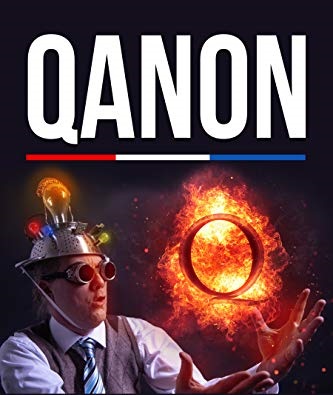 This old world keeps getting stranger and stranger...

A week after Recluse published the second interview he and I did on his Podcast: The Farm... a curious video, produced by Tom Hannon, appeared at the Financial Times website. What makes this video (which was published on October 15, 2020) curious, is that the focus of the FT video, centers around much of the material that Recluse and I had discussed, when we recorded on October 2nd.

In a case of conventional media catching up to the high strangeness of sync-culture, the FT posted a video titled: “Is QAnon a Game Gone Wrong?” This exact question was raised by Recluse during our discussion about QAnon vs Antifa... he asked: "How much do you see LARPing as a factor in the rise of these cults? It really seems like a lot of the kids who end up in this shit were groomed by LARPing."

Recluses question came toward the end of our discussion, where we covered a variety of para-political topics. We explored the idea that Q especially was a Live Action Role-Play PSY-OP, used as a recruitment tactic of the alt-right. This media-sync is even more strange, taken within the broader context of our first interview (published 7-20-20), where we brought in all the high weirdness of the FT video, including Discordianism, the Principia Discordia, Robert Anton Wilson, the 23 sync, etc.

And, as the discerning readers of this blog know, we have touched upon the enigmatic Operation Mindfuck!, on more than one occasion. I had done an exposé on QAnon as an Alt-Right mindfuck, back in August of this year. There is also an extensive series on Operation Mindfuck!, on our affiliate YouTube channel: Bigtime Television23.

I attribute this mysterious synchronicity of the FT (itself a free-market, classically liberal magazine) video, more on the hard work and exhaustive research done by Recluse, than on any magickal coincidence. It appears that, like Recluse… someone at the FT has done their homework. That someone appears to be Izabella Kaminska. This from the FT description: “Izabella Kaminska explains how QAnon stems from the worlds of online gaming and Playboy magazine. It's not a conspiracy. It’s a way to hack reality.”

Watch this space, for things will only get stranger from here on out…

Yes, I noted the timestamp for this post. Cosmic trigger indeed. I started this day away from from these lands battered and torn.(JH) Think globally, act locally.87

Thanks for the heads up abut Q. 87

Surely Perfidious Albion is responsible for everything sinister in human history and this video is simply an admission of how Q was a UK intelligence op which they lost control of.

Garmr...
Funny that you suggest this, as Recluse has long held suspicions as to the veracity of the British Empire (which never ended) and especially British Intelligence.

The joke is how the "empire" was the story used to hide what was really going on. All that was passed off to the state department after the war anyway. UK basically surrendered to the USA. Nationalismays? It is all very Kurious Oranj my dude.