House of the Rising Podge 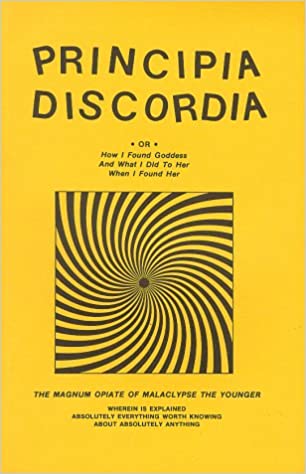 Magicians, especially since the Gnostic and the Quabala influences, have sought higher consciousness through the assimilation and control of universal opposites... good/evil, positive/negative, male/female etc. But due to the steadfast pomposity of ritualism inherited from the ancient methods of the shaman, occultists have been blinded to what is perhaps the two most important pairs of apparent or earth-plane opposites: Order/Disorder and Serious/Humorous.

Magicians, and their progeny the scientists, have always taken themselves and their subject in an orderly and sober manner, thereby disregarding an essential metaphysical balance. When magicians learn to approach philosophy as a malleable art instead of an immutable Truth, and learn to appreciate the absurdity of man's endeavours, then they will be able to persue their art with a lighter heart, and perhaps gain a clearer understanding of it, and therefore gain a more effective magick.

This is an essential challenge to the basic concepts of all western occult thought, and POEE is humbly pleased to offer the first breakthrough in occultism since Solomon.

The curious will find many more profundities such as this, on the newly updated Tek-Gnostics Website. Our newest addition to the tek-gnostics archives is titled: House of the Rising Podge - A Principia Discordia Primer! The Principia Discordia is a Discordian religious text written by Greg Hill (Malaclypse the Younger) with Kerry Wendell Thornley (Lord Omar Khayyam Ravenhurst). The first edition was printed using Jim Garrison's Xerox printer in 1963. The second edition was published under the title Principia Discordia or How The West Was Lost in a limited edition of five copies in 1965.
We publish this primer as a public service... as the PD is one of the few religious texts worth considering in these strange, post-truth days... please enjoy!
Note: All statements are true in some sense, false in some sense & meaningless in some sense...
The Goddess Prevails.
Posted by Jack Heart at 8/12/2020 04:39:00 PM

I suppose letting scientists be chaotic runs the risk of them creating another bomb. Maybe Eris would like that sort of thing but it can become tiresome. But the best sort of outlaw is the natural outlaw, who breaks so-called laws of nature. I was listening to Jane Goodall just today, and she is this sort of outlaw. Her major crime against order was giving primates names instead of numbers when studying them.

Garmr...
The best sort of Magician and/or scientist is one that breaks the so-called laws of nature... once you run out of pre-programmed script, there is nothing left to do but get creative!

Besides... chaotic scientists may create another form of gin! Cheers!