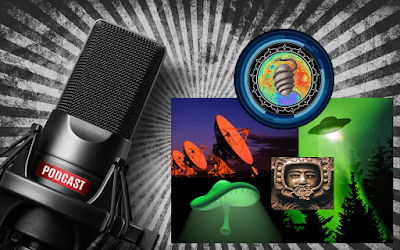 The continued interest in my recent weblog series: Blows Against The EMPIRE has resulted in several interview requests from a veritable rogues gallery of podcasters. The boys from the Black Pill podcast were a lot of fun and especially interested in the whole Black Iron Prison/Operation MindF#@K! material, that has been a through line on tek-gnostics for a few years.
The interview was conversational and all over the map (remember, the map is not the territory!), not unlike a rambling, raucous, braggadocious, barroom conversation that you might overhear (and think: what the hell are they talking about?). Although in this conversation, various sacred cows were irreverently sacrificed in the name of Eris, goddess of discord.
Fittingly, the Black Pill podcast was posted on September 23rd... All Hail!!!
You can access the podcast at:
Apple Podcasts
Spotify
YouTube
Ken and Shane were gracious hosts and, all-in-all a very entertaining hour and a half. Check it out! I also recently appeared on podcasting new-comer: Drinking about Conspiracies. This one was especially fun for yours truly, as the show's interviewer and research droid, Twist... was an old acquaintance of the tek-gnostics traveling minstrel show. We ran into each other at the 2017 Contact in the Desert conference, in Joshua Tree N. F. (you can check out Twist's website here). As fate would have it, we both attended Jacques Vallee's lecture, which, in many ways, was the precursor to whole Bigelow Aerospace/TicTac/UAP revelations that has dominated ufology ever since.
The 2017 CITD was also pivotal for the direction of tek-gnostics, as this is when we made an editorial pivot toward High Strangeness, as an emerging, cultural paradigm. Our experience at Contact, in part, solidified our understanding of just how crazy our world had become... and how much crazier we expected it to get, as we have seen... Per Twists's episode notes, we delve into: "the Trifecta of High Strangeness: "UFOs, Gnosticism and psychedelics," perfect catchphrase coined by our guest, Jack Heart. Further, Who is Jacques Vallee anyways, and why should we care?!"
You can catch my (YouTube) interview with Twist here...
Drinking About Conspiracies
These two podcast interviews were fun and, for me at least, entertaining exercises in Discordian tomfoolery.
In upcoming podcast news... me and my old ally in all things Fortean, the enigmatic Recluse of VISUP and The Farm fame... are in talks about doing another episode together, where we will likely delve into some of the more poignant aspects of my Blows Against The EMPIRE series... as well as speculate on the current state of parapolitics. Working with Recluse is always informative, and you can expect some surprises and revelations of things to come... as Recluse is usually one or two steps ahead of the manipulations of those dastardly Archons.
Stay tuned... because as crazy as it has gotten... it's only gonna weirder, from here on out!
Cheers!   - J ♥
FNORD
Posted by Jack Heart at 9/26/2021 10:21:00 AM
Email ThisBlogThis!Share to TwitterShare to FacebookShare to Pinterest
Labels: Book Review, Eschaton, Futurism, Heresy, High Weirdness, Psychedelia, Tek-Gnostics, Xenoarchaeology

The sheeple ARE the battery of Elongated-Skull Rothschild Dark Empire at War with The Anomaly-21 heliofant.com

Choose your conspiracies carefully. It is easy to get sucked into the screaming-daemon void of craziness, with little effort on your part. All it takes is a little slip-up on the second commandment of the conspiracy age. Demiurgic powers use trickery as it's go-to tool of deception... beware the black iron prison...

ALERT: The disjointed syntax and robotronic phrasing of certain anonymous comments (see above), suggest that said comments are being generated by AI/bot actors/agents... perhaps autonomous... perhaps not. Be advised of potential bot activity, and act accordingly...

Annoy, leave this site alone. This site has been around for many years without Archon prattle. Get lost freak! 87