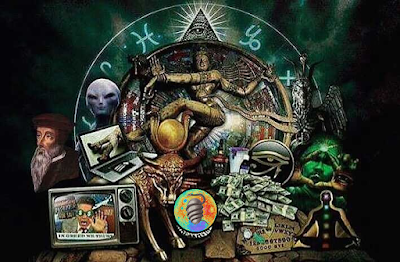 In recognition of the disconcerting times we find ourselves living in… in the realization that these strange days have never been stranger… in response to all that has transpired in transforming our brave noö world… the Tek-Gnostics info-nexus has implemented a significant rethink as to the nature and the implementation of our prime directive. The Tek-Gnostics network has long been an aggregator of Old Earth's collective knowledge... for each of you... the collective conscious. We continue in this civic responsibility, however, desperate times call for desperate measures.

Since August of last year, with the first installment of Return of the Archons, we have been grappling with the profound culmination or “gathering” of geopolitical, sociological and spiritual change, that has been gaining momentum and intensity. We commentated on the ways in which these rapidly evolving energies have begun to manifest within the zeitgeist. We have inferred that within these winds of change, there waifs a distinct and peculiar air that carries the scent of the strange and weird.

In our Conspiracy Culture International series, we further observed and sought to articulate the cultural ramifications of these strange events. As is often the case in such times, these perplexing energies appear to contain an occluding darkness, like the gathering of storm clouds. We suspect that it will get darker, before a return to the light… ebb and flow. In the spirit of making the best of a bad situation… the Tek-Gnostics network has undertaken a system upgrade.

Our first action takes the form of a modest portal at our mothership website, titled simply…


Herein we begin with a brief historic chronicle of the phenomena, in which we seek perspective on its modern origins. We recount, lest we forget, the wacky component to the weirdness. For the inoculation to darkness, is the recognition of the absurdity that resides within the heart of darkness. We recollect the balancing influence between comedy and tragedy. An integral component of the Tek-Gnostics network’s prime directive re-boot is the application of humor to an otherwise unbearable situation. We seek to uncover the essential humorous/serious nature of life in the dualistic, material world.

In this endeavor, we have only just begun. Watch this space for further developments. In the meantime, here are some other existing links within the Tek-Gnostics network that reflect the prime directive and the course correction underway…