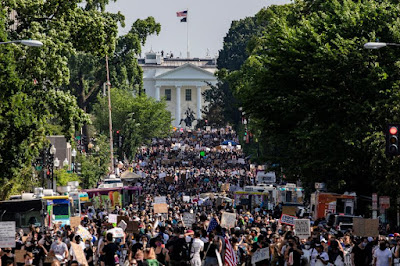 One always hopes… with the passing of time… to gain some perspective and attain a deeper understanding of that which triggers events of consequence… along with insight as to the ramifications of those events and their triggers. Alas, the current situation is relentlessly transmogrifying before our very eyes. The situation is moving too quickly for us to catch our collective breath. Barring (no pun intended) any further catastrophic developments… let us nevertheless jump into the morass of High Strangeness with both feet…

To do so, we once again turn to our field operative and prankster provocateur, Agent 23. He has been in deep cover for the last few months, moving undetected through communities, researching and meticulously  compiling an exposé of epic proportion. In doing so, Agent 23 has also developed a timeline of pertinent events that have led up to our pandemic present day. So without further ado,  let us begin with 23’s timeline…

DATELINE: December 31st, 2019
The U.S. Centers for Disease Control and Prevention (CDC) becomes aware of cases in China and began developing reports for the Department of Health and Human Services (HHS).

DATELINE: January 31, 2020
The Trump Administration, through the U.S. Department of Health and Human Services, declares a public health emergency, and imposed a mandatory 14-day quarantine for any U.S. citizens who has visited Hubei Province in China within the preceding two weeks. 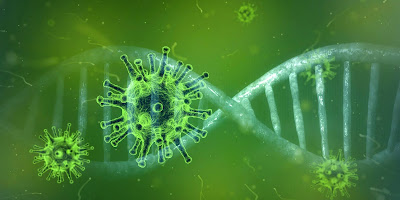 Editors Note: The Covid 19 pandemic serves as a catalyst for things to come. Not only did the pandemic bring world societies to an abrupt halt… with whole industries shutting down, national sequester and other measures… it, at last, made apparent to world populations the true extent and trajectory of the dystopian future that is in store for most 21st Century earthlings.

With such realizations come fear and panic. Additionally, this global awakening lays bare the inequity of Late-Stage Capitalism’s class (read: cast) system. With whole populations sequestered and out of work, the pandemic, in a sense, becomes a catalyst of awakening. Once off the hamster wheel of employment, people are given a chance to collect their breath and ask deeper questions, such as… “why am I busting my butt for some American Archon?”

We now return you to the timeline...

DATELINE: May 25, 2020
George Perry Floyd Jr. was killed during an arrest in Minneapolis. An unarmed black man, Floyd died as a result of a white Minneapolis police officer forcefully pressing his knee on Floyd’s neck for over eight minutes.

DATELINE: May 28, 2020
As a last straw to systemic police brutality, riots ensue in the streets of Minneapolis, culminating in the third precinct police station being burned to the ground. Protests spread to other American cities.

DATELINE: May 31st, 2020
While protests intensify outside the White House, President Trump tweets two words: FAKE NEWS! This message came as demonstrations continued for a sixth day, triggered by Floyd’s death. That night, the New York Times reported that Trump “sheltered in place” in the White House’s underground bunker, over concerns of the growing protests… a report that Trump denies, stating that he was merely inspecting the bunker.

DATELINE: June 1, 2020
The next evening, Trump’s Toady Attorney General, William Barr, ordered Lafayette Square cleared by police and National Guard. Using teargas, rubber bullets and troops mounted on horseback, they moved against the gathered protesters… so Trump could, in fine social media fashion, post a selfie of himself in front of St. John’s Church, holding up “a” (not his) bible. Some claim he held it upside down (in a satanically symbolic gesture, similar to the way the inverted pentagram is used), but this researcher cannot verify that report. 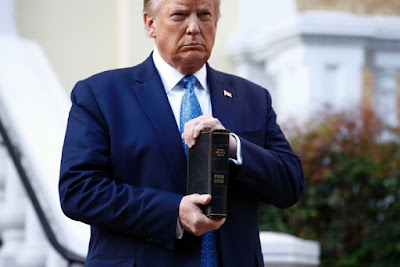 Protests over racial injustice spread overseas to Amsterdam, London and Nairobi, among other cities.

In the ensuing days, Trump wanted to deploy 10,000 federal troops in D. C. to return LAW & ORDER to the capitol and protect the White House from dangerous, radical protesters (pictured below). Although that number of troops was not attained, the signaled intent of the President was sufficient to elicit a strong reaction from the American Military. 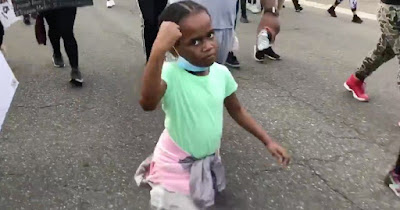 DATELINE: June 3, 2020
General James Mattis denounces President Trump, describing him as a threat to the Constitution.

DATELINE: June 20, 2020
Trump holds a rally in Tulsa, Oklahoma, where white residents murdered an estimated 300 Black Americans 99 years ago. Social distancing and safety masks are politicized and discouraged. For some reason, the rally doesn’t draw the crowd anticipated by Trump's re-election team. 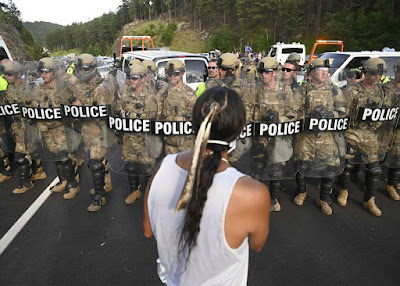 The Trump administration toys with a shift in message, to: “just live with the virus” rather than invest in a national recovery plan for dealing with the now-exploding pandemic. Along with Brazil. the U. S. becomes an outlier of failed covid 19 policy, compared to other countries of the world.

As the European Union officially bans American travelers due to a failed covid 19 policy, the U. S. officially becomes a "shithole country."

The above datapoints in the timeline demonstrate facets of a continued erosion of old norms, and the rise of something new. Even as the old paradigm dissolves into a mist of unpredictability, the afore mentioned datapoints illustrate converging facets of a new para-political reality, coming into focus… emerging from the fog of post-truth-era uncertainty.

The convergence of pandemic, social and ethnic equality, and the questioning of worker-bee mentality, now intermingles in strange ways. Of these varied facets, the unforeseen paradigm shift in the questioning of the “protestant work ethic” is perhaps the most dynamic. Large segments of the population are beginning to question whether late-stage capitalism is in their best interest. Lord knows the capitalist overlords are reaping huge rewards from divided and confused laborers. 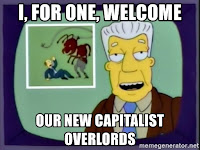 And after all, this is the end-game strategy of the Archonic, worldly powers that be. Now that late-stage capitalism has moved into the “smash and grab” phase, workers are becoming less and less necessary. This is precisely why the American middle class is being systematically phased out. There is a robot that can do that job. 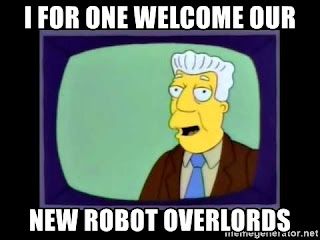 This coordinated phase-out began with the 2008 crash, where the American middle class lost most of their net-worth, through a manipulated real-estate crash. The banks got bailed out. The American public… not so much. The last few decades have seen the largest transference of wealth, from the 99%... to the 1%... in the history of capitalism.

Current tracking of missed rental and mortgage payments suggest that near-future eviction rates will triple those of 2008-2009. Add to this the skyrocketing unemployment rates, all indicators point to a near future economic meltdown that will make the great depression look like a walk in the park.

So this is one possible trajectory of the Brave Noö World that looms before us. It feels as if the Archonic powers have stacked the deck… are about to play their trump card. But there exists… of course… other possibilities. The unforeseen paradigm shift in the questioning of the “protestant work ethic” represents an interesting “wild card” in the socio-economic, para-political deck. Perhaps "we the people" are waking up.

We do indeed find ourselves living in a world of high strangeness. Whether the times we are living through are an orchestrated, social-engineered, cultural reset… or a chaotic manifestation that signals a reemergence of an archaic, gnostic revival… or even the rise of the great god pan… this is not a time to panic. This is a time of dangerous opportunity… a time to gather our thoughts and intentions.

Again, perhaps the most dynamic and unforeseen consequence of the near-global stay at home protocols, has been the reprieve from the daily grind of an 8 to 5 existence. Sequestered, parents are spending more time with their kids and re-discovering the mysterious, karmic bonds of family. This deep re-think allows us to contemplate and realign our values. Such self-assessment and insight is only good for us… and bad for the Archons.

Given the social and economic turmoil, we take care in navigating this time of dangerous opportunity. If we keep our wits about us, we can pull through…

Moving into the summer months, we now look back at our tumultuous spring… the American Spring where peaceful protest sparked a global demand for human equality and personal dignity. Unlike the Arab Spring of a decade ago, which provided scant, long term success in the way of liberty… this American Spring still possesses the power and vitality to promote lasting change. If we stick together… calling the bluff of the divide and conquer tactics of the Archonic powers… the American Spring can blossom and thrive as a Noö beginning… if we take the time and care to nourish it. 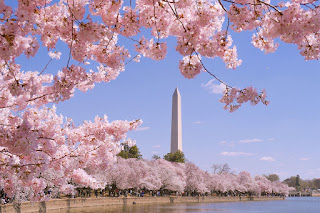 As for our intrepid Agent 23… he has indicated that he continues compiling an exposé of epic proportion. Although we have not seen the content of his work, he has hinted that it involves a deep dive into the machinations of the Trump Crime Family, that will make the Steele dossier look like a child's bedtime story. Stay tuned, dear readers… for some crazy-ass investigative reporting will soon be coming our way.

Special agent 23 this is agent 87. Late stage capitalism/ smash and grab, is just beginning. Mars Hotel for the lucky ones. Looking forward to all the knews that comes our way. Shineforth brave souls! 87

Society stands still and watches as technology and politics move forward faster and faster. The buzzword is frictionless like a cartoon reel of Wile E Coyote furiously running in place in mid air. In the end only Acme profits.

Garmr...
Wile E Coyote was a very stable genius. Seems like the Acme-atocracy has the upper hand...

I wouldn't denigrate Wile E Coyote by comparing him to the arsonist in chief.

Garmr...
I differentiate between the two, as the arsonist in chief is a: “VERY” stable genius…