Navigating the Apocalypse 1.4 - Revolution in Babylon 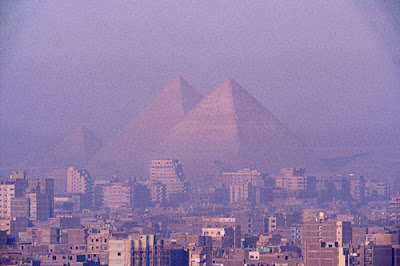 One desperate act of self-sacrifice by Tunisian ‘Bouazizi Mohamed ignited a popular revolution in North Africa. The fire of liberty he lit spread from Tunisia to Egypt and has been burning brightly since. As calls for Mubarak to step down continue, the entire Middle East appears to be on the threshold of socio-political transformation. Given the power of the US backed Egyptian military, this peaceful revolution could go any number of different ways…. but the fire of liberty in the hearts of a people is also a powerful thing.

Throughout the world, those who cling to power are essentially choosing the old paradigm of not-enough-to go-round politics as usual. This is a strategy of entropy… a closed system that is doomed to a cycle violence and oppression. Granted, it seems that those who choose and are in power have the upper hand. The politics of the past are well entrenched, using imperialistic military might to “control” the populace.

Within this old model, the US is compelled to protect its interests (oil) in the Middle East, as collateral against its massive debt to China. The Suez Canal is an important asset in delivering on that debt. Consequently, American servicemen and women continue to die defending China’s interests… die defending an antiquated paradigm.

Our brothers and sisters in Tahrir Square are choosing the new paradigm of a peaceful, harmonious Earth. These courageous men, women and children… using the technology of the future… social networking platforms… collaborated in the most remarkable demonstration for freedom since Tiananmen Square. This demonstration… revolution… is the paradigm of the future… the paradigm of evolution. What is unfolding before our very eyes (as seen on CNN) is a collision of the old and the new world. A struggle for the future… a clash of spirit against might... of love against hate. Let us pray that this conflict cultivates love and facilitates a peaceful transformation for all.

Although this transformation is affecting all of the Middle East, it is Egypt… the land of the Pharaohs… that has captured the world’s attention. Why Egypt? Why Cairo? Let us not forget what massive artifact of antiquity lay on the outskirts of Cairo. The Great Pyramids of Giza… archaic structures of mysterious power… claimed to be everything from a vast astrological ark of knowledge to an ancient astronaut spaceport… stands in mute witness to humanity’s most recent struggle for freedom. 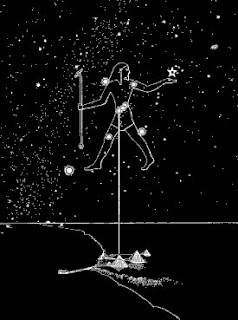 I don’t know why, but I feel that this is important. The Great Pyramids and humanity are bound to the same fate. For me, they symbolize humanity’s ancient past and civilization’s origins… as well as being an edifice of humanity’s future as a space faring species. The Giza complex is said to be aligned and have a mysterious connection to “Orion’s belt” in the Orion constellation. The stars of Orion were associated with Osiris, the sun-god of rebirth and afterlife, by the ancient Egyptians… while the nearby constilation of Sirius (the Dog Star) was associated with Isis. These constillations are central to “Ancient Astronaut Theory” which reference ancient technology or artifacts. Humanity has always been captivated by the stars and space flight is our most recent exprssion of that obsession.

These associations go deeper than our past or our space travelling future. I think the Great Pyramids symbolize and define humanity as a species that uses artifacts in our manifestation in space-time. The use of technology is an extension of humanity in Universe. The Great Pyramids may be the quintessential artifact or expression of the human species on Earth. They represent our fascination with the cosmos and our desire to know where we came from. Were we seeded here eons ago, or are we alone in Universe?

Again… I am not sure where all this is going… but I feel it is important that we pay attention to these events in Egypt. The plea of Egypt’s people for freedom effects all of us. I feel that humanity is at a crossroads between the old and new paradigm. The choices we make today will impact what the new paradigm will be. Our future is one of all peoples of Earth collaborating in harmony. Let us hope for all our sakes that this moment in time moves us toward love and away from fear.

Is this Rand Paul add on this site ,site sponsored?

Thank you for your question...

No, our site is not sponsered by Rand Paul. Thank you for bringing that particular add to our attention. We are now blocking that url from our adSense widget. We use adSense to help pay for costs associated with keeping our main web presence, www.tekgnostics.com, on line.

Your posted question reminds us to pay more attention to our experiment with advertising...

Although we may rant once in a while about politics, we do not affiliate with any particular political party. As Tim Leary said… “If you want to discuss politics, you have to get down on all fours.”

We will re-double our screening efforts to keep our site free of any content of questionable intelligence...

JP sorry for the Anoy, just being cautious. I had a hard time thinking you would support any-thing from Rand Paul. His father has some interesting polemics but his son is a rabid tea party attack dog. Great quote from Leary. Dennis

Thanks for the heads up... that was very discreet of you to use anony… I would have expected both barrels blazing! My original intent was to pay the annual expense of the website with advertising dollars… I guess when you get in bed with “madmen” you are in danger of getting screwed…

I hadn’t been paying close attention to what was being advertised. Once I block the website for Rand, another, more hideous PAC sponsered, neo-conservative add replaced it!

My great great great great great great grandmother came from Tunis Africa to Sicily where her family spread later to the united states... In fact I look like a fare skinned Tunisian... I have similar features to the Egyptian pictures throughout the ancient civilizations... I am not sure about my heritage besides that but do you have any insight about Tunisia? I didnt know that they were one of the first civilizations or they looked like me so its a shot in the dark but i am trying to understand my heritage and my ancestry... Thank You Sincerely, Dani