In addition to the Epik hack that was attributed to the hacktivist collective, Anonymous (that we reported on, in our September 17th post)... It appears that those rascally Anonymi are at it once again. At the end of September, the Taiwan News reported that Anonymous had uploaded a pro-Taiwan Independence banner on a Chinese tourism promotion site. To wit...

A quick recap of the Guy Fawkes masked marauders that we all know and love...  Anonymous originated in 2003 on 4chan and gained notoriety for hacking the Church of Scientology, the Westboro Baptist Church and a number of large corporations including PayPal, Mastercard, Visa and Sony. If you're familiar with Sam Esmail's Mr. Robot, the hacking group fsociety in the show was inspired by Anonymous.

So Anonymous are back in the news... which begs the question... why now? In my upcoming interview with the ever-astute Recluse, on his The Farm podcast, we get into the Anonymous question (no pun intended) in regard to their recent revival... as well as the "anonymous" nature of Anonymous. Such an unidentified entity or entities are ripe for nefarious impersonation of the persona.
Full disclosure: I am a fan of the idea of an internationally active, autonomous collective of digital pranksters. Since it's/their inception, Anonymous have demonstrated a take-from-the-rich and give-to-the-poor aesthetic that is appealing to my sensibilities.
However, the very nature of anonymity lends itself to bad actors who might seek to further their own agenda, while impersonating or blaming the original Anonymous. It is not hard to imagine some CIA black-op that utilizes the anonymous moniker to disrupt or destabilize a foreign (or for that matter, domestic) entity.
This topic is but one example of the parapolitical potpourri that Recluse and I explore, in the upcoming episode of The Farm. Watch this space for the publication date... 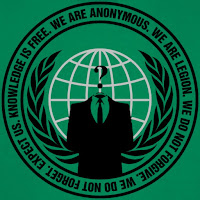 Part One
Posted by Jack Heart at 10/07/2021 12:16:00 PM
Email ThisBlogThis!Share to TwitterShare to FacebookShare to Pinterest
Labels: Anonymous, Cyberpunk, Occupy

The Original and ONLY Real Anonymous Group is "The Anti-Ciantology" ($cientology) Movement.The Children of Scientology Cult Members who would protest "in masks" outside Dianetic Reading Rooms (Scientology Centers) in the early 2000s.

Anony... Although many subsequent campaigns were attributed to Anonymous, it is far more likely that sympathetic copycats arose to provide the appearance of a broader movement.

Per Wikipedia... In its early form, the concept was adopted by a decentralized online community acting anonymously in a coordinated manner, usually toward a loosely self-agreed goal and primarily focused on entertainment (or lulz). Beginning with Project Chanology in 2008—a series of protests, pranks, and hacks targeting the Church of Scientology—the Anonymous collective became increasingly associated with collaborative hacktivism on a number of issues internationally.

Hardly anybody talks about Scientology's "Space Opera" anymore. Why?
http://forum-alien-facts.com/index.php?p=/discussion/69/non-military-organisations-with-extraterrestrial-links
http://enlightenmefree.com/phpBB3/viewtopic.php?t=2321
https://www.reddit.com/r/UF0/comments/lu1l09/matilda_mcelroy_the_nurse_who_communicated_with/
Do both Scientology and J. Z. Knight's R.S.E. have the same origin?