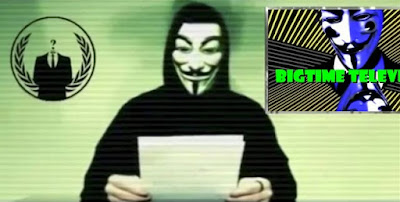 The hactivist collective Anonymous says that it has gained access to a massive trove of data from Epik, the web host and domain registrar for a variety of right-wing sites. Epik’s client list has reportedly ranged from more mainstream conservative groups like the Texas Republican Party to Gab and other far-right sites on the fringes of the internet.
On September 14th, 2021... Claire Goforth, writing for the Daily Dot, reported that in a press release, Anonymous says that it has captured “a decade’s worth of data” from Epik. They say the data includes domain registrations, domain transfers, passwords, account credentials for all of Epik’s customers, logins, more than a half-million private keys, payment history, a “dump of an employee’s mailbox, just because we could,” and more. Of the private keys, they wrote, “What are they for? Who knows!”
“This dataset is all that’s needed to trace actual ownership and management of the fascist side of the Internet that has eluded researchers, activists, and, well, just about everybody,” they said.
“And maybe have a little extra fun. For the lulz.”
The release also asks people to support both hackers themselves and Operation Jane, an initiative the collective recently launched in protest of Texas’ abortion ban. As part of the latter effort, over the weekend, Anonymous hacked and defaced the Texas Republican Party website.
David Obelcz, writing for Malcontent News, said that an examination of the Epik Software data released by Anonymous has security experts concluding the claims made by the shadowy organization are true, and it will be a devastating blow. “This is the Panama Papers for hate groups,” a researcher told us after reviewing just part of the 180GB of information retrieved. “In all my years, I have never seen a breach of a domain registrar to this scale. The lack of security to protect this information is breathtaking.”
You can read Obelcz's full article here.
For more background information on the Texas shenanigans, check out my cynically infused post... The Shadow Docket.
Watch this space... as the Culture Wars continue to virally expand...

Lumenar...
That is a good question. Perhaps you can research and report back?

Reporting back: As far as I can tell from web search results, Epik does not appear to have hosted Arktos, but Arktos publishes the same kinds of hate speech Epik enabled, but with a veneer of academic philosophical nonsense. Jason Reza Jorjani became editor-in-chief of Arktos Media in 2016, but later left that position. Arktos Media published Closer Encounters in August. I listened to part of the podcast when Miguel Conner interviewed Jason Reza Jorjani to find out why they were talking about the U.S. Government's U.A.P Report on a podcast primarily about religion. Web searches revealed more of the guest's opinions that are far more disturbing than time traveling Martian Nazis piloting UFOs and impersonating deities in antiquity.

One of those "independent" researchers who just happens to be fascinated by Aryan racial supremacy and only reads philosophers who the Nazis approved of. Some of his work was even too much for old Jeffrey Mishlove to ignore.

So is Closer Encounters just a rehash of
Iron Sky?

There were a lot of great German scientist and engineers around the time of WW2 and before. Fortunately, their leaders were total donkeys, but you never interrupt the enemy when they are making mistakes. These "nazi super weapons" were often such donkey fantasies.

Operation Paperclip and the post-WWII Nazi "ratines" is all a strange bit of US history... especially Werner Von Braun's deathbed warning to alert the public to the secret world of the military industrial complex, and a potential false-flag alien invasion... stranger than fiction!

In 1961, President Dwight D. Eisenhower alerted the public about the military industrial complex years before Dr. Werner Von Braun warned Dr. Carol Rosin about false flags from 1974 to 1977 around the same time when Gene Roddenberry wrote some scripts eerily similar to what is in the original "Project Blue Beam" essay published by Serge Monast in 1994. Christopher Knowles exposed it.
https://secretsun.blogspot.com/2010/11/project-blue-beam-exposed.html
Is there any good reason to suspect Dr. Werner Von Braun's warning was about Project Blue Beam besides the obvious similarity? Dr. Steven Greer tweeted about a "false flag" in June.
https://www.reddit.com/r/aliens/comments/nwov0v/dr_steven_greer_goes_full_blue_beam/