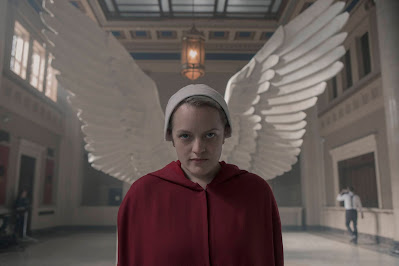 That’s It! I’m packing up and moving to Texas, to become a Abortion Bounty Hunter! I always wanted to be able to hunt down innocent citizens aiders-and-abettors of crimes against the EMPIRE! Originally called the Handmaid’s Tale law, Texas bill SB8 outlaws all abortions once medical professionals can detect cardiac activity. Never mind that this threshold is crossed before most handmaids women even know they are expecting…

But more to the point of my change of career, the Texas law allows me to hunt down and bring to justice any Texas abortion provider who violates the law, as well as anyone who “aids or abets” a woman getting the procedure. The pay looks pretty good. All I have do is file a lawsuit against the abettor, and I get paid $10 K for a guilty verdict. I’ll be going after those foul Uber drivers first, you can bet your sweet ass.

Hell, I don’t even have to move to Texas, because the law allows anyone, anywhere in Amerika to bring a lawsuit against any Texan suspected of aiding and abetting.  I don’t even need to be associated in any way whatsoever to the medical procedure crime, to bring suit. All I have to do is hunt down the perp, slap a lawsuit on ‘em, and it’s payday!

This is a sweet deal for the State of Texas. Bringing in bounty hunters like me, allows them to not have to enforce the law themselves. Never mind that such a law is illegal as hell and would be struck down, if the State of Texas tried to enforce it. Such an evasive maneuver is insidiously, diabolically brilliant, when you get right down to it. This way, they don’t have to get their hands dirty.

If it’s illegal, you ask… how is the State of Texas going to get away with it?

This seemingly illegal law is being allowed to go into effect in Texas, because of the exploitation of a back-door instrument of the US Supreme Court, called the Shadow Docket. Such a maneuver smells worse than any Deep State fever dream you can imagine… and I know you can imagine some pretty wild Deep State conspiracies… believe you me.

The Shadow Docket is an obscure procedure that refers to decisions from the United States Supreme Court, which are decided outside of its regular docket without oral argument. Cases dispatched by the Shadow Docket can be effectively buried resolved even as lower courts are continuing to assess them… even before all the evidence is known. Decisions can come in the middle of the night, with no public discussion and no guidance to lower-court judges on how to analyze similar cases.

The way that the Supreme Court is supposed to work... is to allow the impacted parties of a case to argue their points both in written briefs and orally before it issues a detailed explanation of its decision. Through this (shadow docket) procedure, the Supreme Court doesn’t have to explain themselves in any way, shape or form.

According to an article from Reuters, by Lawrence Hurley, Andrew Chung and Jonathan Allen… the speed and secretiveness of the Shadow Docket has drawn criticism from legal experts both on the right and left, who call it an improper use of the court’s tremendous power.

“To get on the shadow docket, any litigant can apply to a single justice, who decides whether to forward the dispute to the full court. Five votes among the nine justices are needed to grant a request. No oral arguments are made but opposing attorneys can file briefs in opposition. To be granted, the request must meet certain criteria, including that the applicants would suffer 'irreparable harm' if it is not granted.”

So there you have it. The Supreme Court no longer follows their own, transparent protocols, in favor of a dead-of-night maneuvers that, for all intents and purposes, circumnavigates and subverts the law. The Supreme Court's 5 to 4 decision denied an emergency request to block Texas’ radical new abortion ban, free of any normal court deliberations. So if all you conspiracy theorists out there have been worried about a Deep State… this is it.

The thing is, this is of great concern for all of us… Left and Right. The evil exploits of EMPIRE are designed to divide us into siloed camps of ideology… ideology spoon-fed to us by EMPIRE. Divide and conquer has always been the game plan of EMPIRE… and recently, they have gotten pretty good at it. Remember, we have much more in common than any of us have with the sympathizers, implementers and lackeys of EMPIRE.

Again, this is not about Right or Left… this is about recognizing the manipulations of EMPIRE as a smokescreen, designed to divert our attention away from the fleecing and ultimate destruction of the planet. Think about all the contentious happenings of the last few years. Regardless of how we feel about any particular issue, the contention being provoked... is by design. In the words of Robert Anton Wilson… “Don’t Let Them Immanentize the Eschaton!”

Posted by Jack Heart at 9/03/2021 11:31:00 AM
Email ThisBlogThis!Share to TwitterShare to FacebookShare to Pinterest
Labels: Eschaton, Liberty, OP-ED, Politics

A bit of Fnord spotting the stories about laws like this and the traditionally bizarre news from China about stopping kids from playing video games and banning "girly boy" kpop style acts on television. The high ups have finally read and understood the latest reports about collapsing birth rates and don't like it. For would be number one global powers like China and the USA it is especially troubling. Immigrants and non-citizens can't be relied on to do everything, as Rome found out.

Garmr...
In addition to SB8, Texas' abortion ban & SB1, the voter suppression bill, Texas also has the very oppressive SB4, an anti-immigration bill. It seems that Texas is doing it's damnedest to keep out immigrants from south of the border... even though immigrants make up 25% of the Texan work force... jobs like construction and service, that Texans can't be bothered with.

Migrant labour itself has a distorting effect on the pay and conditions of such jobs. So I'm wary of saying people "can't be bothered to do them". I understand that Texas itself has no problem selling guns that get moved illegally across the border to Mexico. They are good people over there, and it is sad to see narco trade, gangsterism and exploitation sent back to them from the USA. With friends like these...