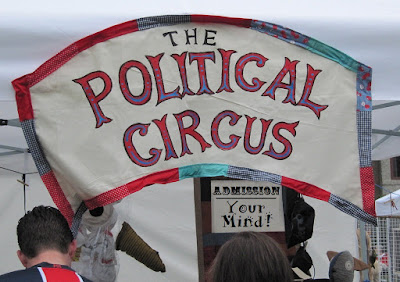 Just when we thought that this crazy ass world could not get any crazier… it does. Life on the “Planet of the Apes” continues to get more complicated, with each revolution around the sun. Beyond survival necessities and creature comforts, we are increasingly impacted and inundated by that brazenly garish carnival sideshow known as: national politics. And what a three-ring extravaganza it is...

In the good ole’ U. S. of A, the political circus’s three rings are populated by three distinct performing classes of clown… the Democrat, the Republican and the Independent. Unlike other clown types, such as the Mime, the Harlequin, and the Auguste… the American “political” clown types appear to take themselves very seriously. Indeed, they believe their antics to be essential to what they refer to as… the political process (honk! honk!).

American political clowns are exceedingly entertaining in their pomposity. They scurry to and fro in the west wing, they parade down the halls of Congress, and they pile out of tiny cars, in impossible numbers, to stand before cameras, proclaiming their latest declarations... all with an exaggerated foppery, befitting their esteemed station and title. 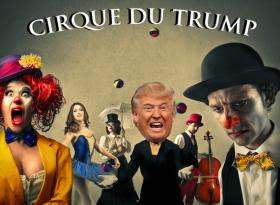 All clowning aside, it is becoming increasingly difficult to ignore such antics. With that said, national politicians have their enablers. Although much-unwarranted criticism has been leveled at the American press… a majority of the nationally syndicated cable news networks (left & right) have exclusively focused upon national politics… ever since the 2016 presidential primaries. This 24/7 coverage has come at the cost of… well… all other news coverage.

Slick op-ed shows, disguised as news programs, brandishing an array of pundits and political wannabes/has-beens… parade their particular brand of partisan politics, portraying their ideological opponents as the “enemy of the people.” Any citizen, who still accesses their news via television, must tune in to a local news program, to hear anything other than politics. And believe you me… there are plenty other news-worthy events that are not being covered by the national news networks.

This non-stop political coverage, framed in a breathless, “hair-on-fire” breaking news fashion, smacks of the ole’ bait and switch con-game. It is as if the hourly breaking news cycle, solely focused upon the most up-to-the-minute, outrageous political maneuverings of the President… or the Congress… or the specially appointed Counsel… is bombarding us with distracting triviality. Just what, exactly… are we being diverted from? What uncomfortable truth, do those rascally "powers that be" not want us to see?

The Empire Never Ended
"Bread and Circuses" or bread and games (from Latin: panem et circenses) is a metonymic phrase critiquing superficial appeasement. It is used commonly in cultural, particularly political, contexts. Within the political context, the phrase means to generate public approval, not by excellence in public service or public policy, but by diversion, distraction or by satisfying the most immediate and base requirements of a populace… by offering a palliative: for example food (bread) or entertainment (circuses).

During the Roman Empire era… the phrase was coined by the Roman satirical poet Juvenal (circa AD 100). In context, the Latin panem et circenses identified the only remaining interest of a Roman populace, which no longer cared for its historical birthright of political involvement.

In our times… like so many other “Fall of Empire” analogies… the term Bread and Circuses is not only poignant, it cuts especially close to the bone, given the distractions we are being subjected to. The current political theatrics being staged for mass-consumption, feed our most base impulses for spectacle… while diverting out attention from an Empire in decline. 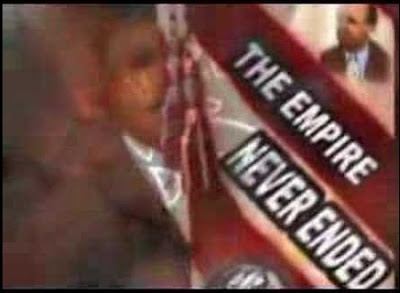 Apparently, those aforementioned powers that be would spoon-feed us a 24/7 diet of political drama, rather than address the very real catastrophic, global challenges we all face. What catastrophe, you ask? Take your pick…

First up would be climate change and the associated climate immigration crisis. Each year, tens of millions of people across the globe are driven from their homes by floods, storms, droughts, and other weather-related disasters. And as the adverse effects of global climate change induce more extreme weather, growing food insecurity, and rising sea levels... that number will surely rise.

Predictably, it is the world’s poorest and most vulnerable communities that are hardest hit. Climate change may very well represent the single most impactful issue facing humanity, in the decades ahead. The effects of climate as an immigration factor has already impacted coastal nations such as in Vietnam.

Right up there with climate change in terms of global impact, is the effect Artificial Intelligence will have on the global workforce. In the coming decades, AI will significantly displace large sections of our existing labor force. According to Kai-Fu Lee, former President of Google China: “Disruption will hit the industry in areas with the largest number of routine jobs – manufacturing, call centers, banks, retail, etc. It will also cause existing players to compete on their speed of automation.” The interested reader can find a job displacement index here.

This dire list would not be complete without including the potential for mass species extinction. A United Nations executive summary released May 6 of this year, by the Intergovernmental Science-Policy Platform on Biodiversity and Ecosystem Services concluded that “transformative change” was needed to save as many as 1 million species at risk of extinction.

“The evidence is unequivocal. Biodiversity, which is important in its own right and essential for human well-being, is being destroyed by human activities at a rate unprecedented in human history.” This warning was delivered by Robert Watson, former chairman of IPBES, to the Natural Resources subcommittee on water, oceans, and wildlife. Loss of species directly correlates to the health of our planet, and our own survival.

The above are but three, overt, off the top o the head issues being neglected by the pop-press. Don’t even get me going on such esoteric calamities as the “War In Heaven” narrative, ongoing at Christopher Knowles’ The Secret Sun weblog. Gnostic times, indeed.

At this most critical juncture, our assessment is simply this... The veneer of civilization is paper thin. One need only glance at the horrific headlines emanating from Syria, Yemen, or Afghanistan to see, not only how fragile civilized behavior is, but how quickly any vestige of civilized behavior disappears in the fog of war. These and other, newly arising bloody conflicts, are the current drivers of the mass immigration of those fleeing war zones. And yet, we get distracted from these grave warnings of just how precarious the state of civilization really is.

We allow ourselves to be entertained by "Trumped Up" narratives that seek to divert our attention from what really matters. We are provided social media bread and network circuses. Not that political intrigues are not impactful. The global rise of Nationalism threatens civilization, just as readily as climate change or AI intrusion. New political sabre-rattling  by the US, aimed at Iran, is but the latest example of: War as Distraction.

In this day and age... we are faced with a Fog Of Information that is as distracting and detrimental as the fog of war. Yes, the veneer of civilization is thin. Political tomfoolery must not get in the way of recognizing and dealing with civilizational threatening issues. We must not get hoodwinked into taking our eyes off of that which unites us all. We must remain focused to do our part to bring about conducive, "transformative change." We cannot let ourselves get tricked by the ole' bait and switch. PT Barnum once said that: there's a sucker born every minute. Don't let it be us. 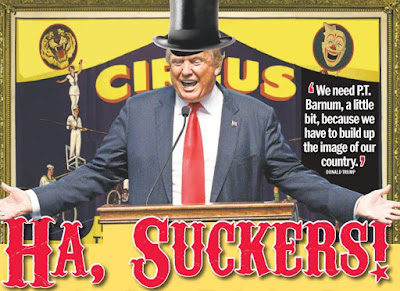 Brain dead sentient beings. This generation of humans need to shine forth compassion and Bodhicitta. What is so wrong about peace, love, and understanding? The freak show in network news is creating a climate of fear and anger. Patience and loving kindness. Create peace, NOW! To shine forth is key! 87