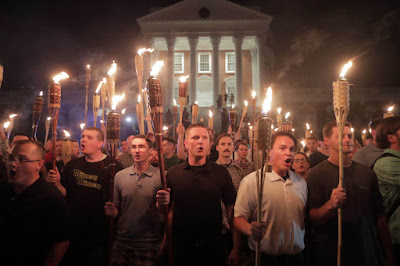 Dateline: August 11, 2017 - Charlottesville, Virginia
"Late Friday night, several hundred torch-bearing men and women marched on the main quadrangle of the University of Virginia’s grounds, shouting, “You will not replace us,” and “Jew will not replace us.” They walked around the Rotunda, the university’s signature building, and to a statue of Thomas Jefferson, where a group of counter-protesters were gathered, and a brawl ensued. At least one person was led away in handcuffs by the police."

A significant percentage of the voting population (who bothered to turn out) in these United States, saw fit to elect Donald J Trump as president, back in the fall of 2016. Against all odds, his thinly veiled Fascist message resonated with enough voters. His election has since been a controversial one. A significant percentage of those who voted for Trump can be fairly typified as what the pop press calls: “Trump’s Base.”

The pop press has also typified this Base as “the Alt Right.” They further suggest that Alt Right is another word for “white supremacist.” Those who recently gathered under the American Fascist Movement’s campaign billed as: “Unite the Right” rally in Charlottesville were clearly just that… White Nationalists, Ku Klux Klansmen, Anti Semites… a broad assortment of your basic Neo-Nazi scum bags. 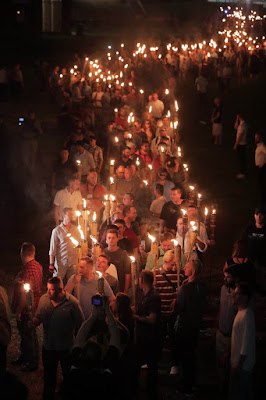 August 12, 2017 - Charlottesville, Virginia
"A car rammed into a crowd of protesters and a state police helicopter crashed into the woods Saturday as tension boiled over at a white supremacist rally. The violent day left three dead, dozens injured and this usually quiet college town a bloodied symbol of the nation's roiling racial and political divisions.

The chaos erupted around what is believed to be the largest group of white nationalists to come together in a decade — including neo-Nazis, skinheads, members of the Ku Klux Klan — who descended on the city to "take America back" by rallying against plans to remove a Confederate statue. Hundreds came to protest against the racism. There were street brawls and violent clashes; the governor declared a state of emergency, police in riot gear ordered people out and helicopters circled overhead."
- Sarah Rankin – AP

What has become clear in the aftermath of this horrific event, especially in light of Trump’s Stunningly Milquetoast response to the Charlottesville violence, is that Trump has no intention of calling out the fast-organizing white supremacist movement in the United States. Although the Alt Right is not the exclusive population of Trump’s Base… they are a significant sector.

At this point, pop liberal opinion would point out that although Trump condemned violence “on many sides” …he did not come out with an immediate clear, decisive statement disavowing the white supremacist movement. Trump’s disinclination to “name the darkness” speaks for itself. Once he chose not to identify fascism, subsequent statements were inconsequential. He had his chance and he missed it.

Pop liberal opinion would then suggest that Trump does not want to upset his Base. This assessment stops short of what well may be going on in Trump’s strategic calculations. The age-old sentiment: “Those who cannot learn from history are doomed to repeat it” comes to mind. In light of Trump’s reaction, and past atrocities, what horrific suspicion also comes to mind is this… Trump has plans for his most fanatical following.

Those who rallied around the “Unite the Right” flag in Charlottesville were well organized. Despite any Nationalist ideological variations, they all appeared to be exceedingly loyal to Trump. Given the apparent level of organization, similar numbers could assemble anywhere in America, at the slightest dog-whistle/tweet, coming from Trump’s twitter account. Such a well-organized group of fanatics such as those in Charlottesville could arguably be likened to, if not utilized as, Shock Troops… prepared to do their leader’s bidding. These Neo Nazi shock troops could be mobilized at a moments notice. 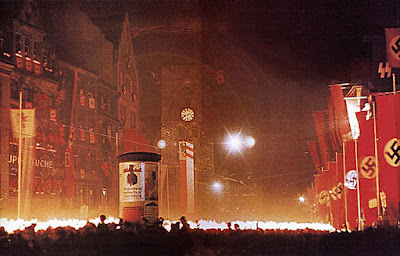 The following is from Wikipedia: "The Schutzstaffel (SS; literally "Protection Squadron") was a major paramilitary organization under Adolf Hitler and the Nazi Party (NSDAP) in Nazi Germany, and later throughout German-occupied Europe during World War II. It began with a small guard unit known as the Saal-Schutz (Hall-Protection) made up of NSDAP volunteers to provide security for party meetings in Munich."

The similarities between the 1930’s era Saal-Schutz and those who gather at Trump rallies dutifully wearing “Make America White Great Again” hats, chanting (both pre and post election) “lock her up” …are to-the-bone chilling. Hitler’s shock troops, the SS, began as security guards at his early political rallies. Similarities between the SS and "unite the right" foot soldiers are obvious. In this day and age, it would not take much for an unscrupulous politician to take advantage of such devotion. Stranger, fouler and darker things have happened. 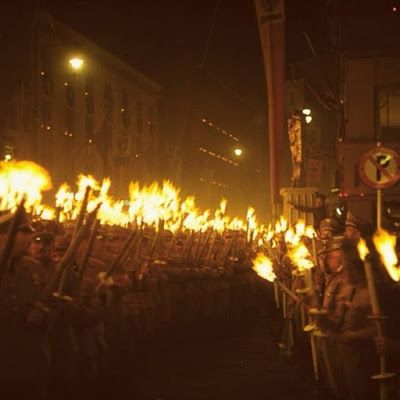 Absurd, you say… Trump would never go that extreme, would never resort to that level of violence to achieve his ends, would he?

If this scenario is not alarmist enough for you, dear reader… let us delve a little deeper into the esoterica surrounding Nazism. During the media coverage of the clash between “Unite the Right” thugs and “Anti-Hate” protesters… there appeared in the footage, an Alt-right-guy waving a large battle flag, emblazoned with the Schwarze Sonne or Black Sun symbol. 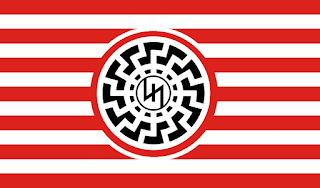 "The term Black Sun (German Schwarze Sonne), also referred to as the Sonnenrad (German for "Sun Wheel"), is a symbol of esoteric and occult significance. Its ancient design is also found on a sun wheel mosaic incorporated into a floor of Wewelsburg Castle during the Nazi era.
Allegedly, the (Black Sun) design was drawn for Heinrich Himmler from an "old Aryan emblem", and was meant to mimic the Round table of Arthurian legend with each spoke of the sun wheel representing one "knight" or Officer of the "inner" SS. The symbol of the Black Sun is purported to unite the three most important symbols of Nazi ideology - the sun wheel, the swastika and the stylized victory rune, and that it is symbolic in its form representing the twelve SS Knights of The Order of the Death's Head and their three retainers."

Erich Halik was the first to link the esoteric SS with the Black Sun roundel insignia carried by German aircraft in the polar region at the close of World War II. The former SS member Wilhelm Landig of the Vienna Lodge (for a critical analysis, see VISUP’s series:  A Sun That Never Sets: The Strange and Terrible Saga of the Landig Group) coined the idea of the Black Sun, a substitute swastika and mystical source of energy capable of regenerating the Aryan race."

Speculation abounds within the world wide web, that ties the Black Sun to... not only Neo-Nazism but the esoteric Thule Society, Nazi secret weapons & UFO mythology, Secret Nazi bases in Antarctica, extra-terrestrial and ancient astronaut theory… the speculative list goes on & on. Research on such topics will provide hours of fascinating, if not disturbing reading.

The appearance of the Black Sun flag at Charlottesville triggers deeper, esoteric thought streams. In synchromystic fashion, these symbols… appearing briefly as they do within pop media… may be viewed as more than coincidence. They become synchronistic flashes of prognosticating insight. They become indicators that point to the dark side of the High Weirdness that permeates modern culture… the culture of the fringe. In earlier posts, we identified this broader, Noö Culture as: Conspiracy Culture International.

The scope and speed of global transformation goes beyond anything we have experienced. The ascent of the fringe, the rise of Conspiracy Culture International is also a symptom that hastens Culture Wars as dark forces of the old paradigm, in their last death throws, attempt to cling to power.

The fringe’s Alt Right underground is a dangerous and scary element of the fringe as it exploits our current cultural disorientation. Neo-Nazism embraces the fringe’s Alt Right, as it gives permission and cover for knee-jerk fascism and violence. However, Conspiracy Culture International is far more diverse than the Alt Right. Conspiracy Culture International is a massive, multi-ethnic, globally intact phenomenon. People of all walks of life recognize and are experiencing this paradigm shift and are “wising up” to the changes going down.

The good news is… we don’t need to accept the Alt Right’s ideology. This old world is changing fast. We can choose to be part of a conducive, tolerant, compassionate paradigm… one of creativity and inclusiveness. We create our future… it need not be dominated by ideological fear. As the great American social critic, Morris Berman said: "An idea is something you have; an ideology is something that has you."