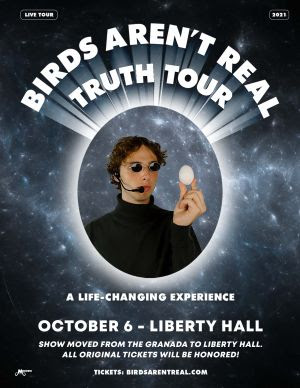 It has been with great interest that the Tek-Gnostics emergency response team has been observing the Legacy Media’s (terminology tip-o-the-hat goes to Recluse) recent coverage of the vast, Orwellian conspiracy whereby the Government (you know the government of which I speak) has completely replaced all living birds, with robotic, surveillance drone replicas. The terrable truth? Birds Aren't Real. Although the MSM (LM) has only just begun covering the story, this insidious plot was first brought to light, just prior to Donald J Trump’s inaugural address, back in 2017.

During the ensuing four years, the Trump administration did not mention this conspiracy once, in the weekly… many… several official press conferences at the White House. Does this silence equate to culpability on the part of the Trump administration? We say yes. Is it a coincidence that strange reports of birds mysteriously dropping out of the sky have been reported in Palm Beach, Florida recently? We think not (can you say: Mar-a-Lago?).

Back in 2017, the Birds Aren’t Real Truther Movement began in earnest with the launching of the Birds Aren’t Real Website. The movement’s founder, Peter McIndoe, fearlessly exposed the plot, amidst widespread ridicule, and orchestrated claims of de-legitimacy. “Our movement has been co-opted by internet trolls and people out to delegitimize us. While there are many satirical jokes made on the internet about us, we are not satirical and consider this labeling harmful to our cause” he said. 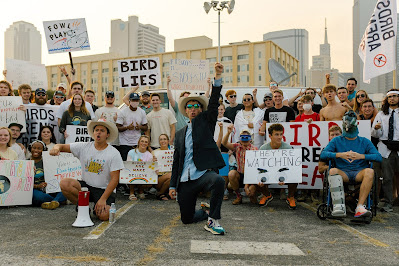 As we all know, attacking the legitimacy of any individual or group who expresses beliefs that are counter to accepted dogma, is a classic, go-to black-op of CIA or FBI types, out to squash any resistance to the bureaucratic orthodoxy. Discrediting the reputation of dissidents is the first option in any governmental disinformation campaign.

Now the Legacy Media has “piled on” in a coordinated attack, describing Birds Aren’t Real as a Gen Z fueled Operation MindF#@K! …actually formed for satirical purposes, poking fun at other conspiracy theorists on the internet. In their coverage, the LM frames Birds Aren’t Real as an elaborate prank, being pulled by Peter McIndoe, et al... to poke fun at other outlandish conspiracy theories, such as QAnon.

As conspiracy theories over politics and the coronavirus pandemic took off in the last few years, the Birds Aren’t Real movement also grew. Birds Aren't Real has such a large, loyal following that the group held a massive protest outside Twitter HQ just last month. The rally was specifically held to urge Twitter executives to change the company's iconic bird logo. On their website, the movement offers a long history and explanation for the theory, which involved the American intelligence community. 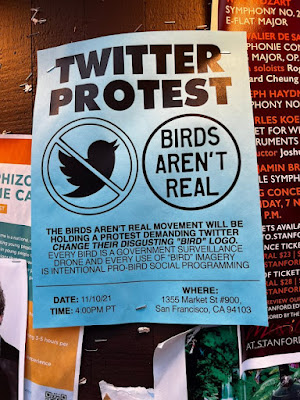 By this time, the inquisitive reader is asking: So which is it? Is it a conspiracy theory or is it a joke? A truther movement or a hoax? A legitimate conspiracy or a MindF#@K? That seems to be the essential question surrounding the enigmatic Birds Aren’t Real movement. Rest assured dear readers, the Tek-Gnostics emergency response team will be keeping our eye fixed upon this rapidly evolving story.

Who knows what truther movement will be the Legacy Media’s next target. They might even go after the Flat Earthers next… stay tuned!

Posted by Jack Heart at 12/12/2021 05:45:00 PM
Email ThisBlogThis!Share to TwitterShare to FacebookShare to Pinterest
Labels: Media, MindF#@k!, Tales of Wonder

The movement implies a company chose a blue bird as a logo because the American Intelligence community. Does this have anything to do with Project Blue Bird? Anthropomorphic drawings of the Twitter logo resemble a member of the Blue Avian species.
https://disclosure.fandom.com/wiki/Blue_Avians
Who is behind this? Does Easter Island's Cult of the Bird Man continue in secret?

Your spontaneous correlation between the Twitter bird and Project Bluebird is an example of synchromystic association. Much goes into these flashes of insight... including personal interest, worldview, pop-media messaging, and one’s own bias. Conspiracy theorists see conspiracy everywhere. Is it live or is it memorex?

The Birds Eye view or something.

It goes with seriously weird protests. There was the QAnon supporters meeting in Dallas awaiting the magical return of JFK.

Over here there is a group called Insulate Britain. There have been protestors blocking freeways over here and getting very excited about home insulation. Whichever way you look at it it's difficult to understand how anyone could get violently excited about cladding in the walls of a home. Just can't buy into the reality of it.

Apols. That should read JFK jnr. Even that's weird. Why not JFK snr if you like rather than JFK jnr ? Bizarre.

“Birds Aren’t Real” is a classic MindF#@k! operation, revealing the absolute absurdity that is the core of most (if not all) conspiracy theories. It doesn’t matter if BAR is sincere or spoof... in fact, MF! operations are most effective when veracity is unclear. I prefer the interpretation that BAR is a seriously funny MF! ...perpetrated by, and demonstrating the humor of savvy Gen Zer’s. And as I always say... humor is the highest form of human intelligence.

The Empire Never Ended... yet the Emperor wears no clothes!

Mountain bluebird you fly with ease
Tree planting bondage, with fecund earth
Yet I slither and plant hither
For you Mom, I demand you be fed the best of beings
For you Mother, I will open the whole to psyche and let shine forth
my beauty. 87

My, my, but the BlueBird keeps on connotating! I especially like the double entendre in your use of the word "whole"

The purpose of this sort of affirmation is often to show a group that you place them above others. The mindfuck element comes what can be described as a "stunlock" where people hyperfocus on issues of how to act like you really believe if you know it is false and what believing actually means. This stunlock effectively stops the person from asking questions about issues superior to the tight focus of the belief. Like many conspiracy theories about the CIA and its supposed omnipotence prevent people from asking questions like, "are the CIA just actually delivering useful results that justify their budget?"

As always... it is good to hear from you. Your question of getting past the theatrics is an interesting one. Do you propose that mindfuck theatrics disallow a broader understanding, beyond the mindfuck?

Also... you can't justify a budget that is secret...

I'm saying that the measure of a successful op could be to break the stunlock not to encourage the development of a sort of "authentic" individual who does not seek to be a member of a group. As traditional 60s views would have it.