As the discerning readers of this blog know, Hofmann was the creator and very first person to have ingested Lysergic Acid Diethylamide (LSD). But his first trip wasn’t on April 19th. It was actually three days earlier. True to the trickster/prankster nature of LSD, Hofmann was (inadvertently) “dosed” by a wickedly pranksterish universe.  On April 16th, 1943, in a flash of inspiration, Hofmann decided to take another look at LSD, so he started synthesizing a new batch. Just as he was finishing that process, Hofmann began feeling strange and decided to set his work aside for the day.

After going home, he began to experience a not unpleasant intoxicated-like condition, characterized by an “extremely stimulated imagination,” he recalled in his 1980 memoir: LSD - My Problem Child. “I perceived an uninterrupted stream of fantastic pictures, extraordinary shapes with intense, kaleidoscopic play of colors.”

Hofmann was convinced that the weird experience had something to do with LSD, which he might have accidentally absorbed through his skin while handling the substance in the lab. But he had to be sure, so he did what any mad scientist would do… experiment on himself. Hofmann later said that he took this risky step because “that’s what the new drug wanted.” In regard to this mysterious transmission, LSD has since demonstrated a consistent, sentient, communicative interaction with its host… ever since humanity’s first trip.

In keeping with Rupert Sheldrake’s Morphic Resonance Theory, the intensely symbiotic and interactive nature of an LSD trip has been impacted, shaped, and evolved by the body of experiences of all the psychonauts who have ever tripped… from Hofmann’s first trip, to today. Each human’s psyche is shaped… but also shapes… the symbiotic evolution of the psychedelic experience, as a shared, cumulative phenomenon.

This, for example explains why those who ingest the South American psychoactive brew Ayahuasca, often experience visions of luminous snakes or jaguars at the height of their ceremony. These archetypical motifs hold deep significance for the shamanic Curanderos and Ayahuasqueros who have practiced their art for millennia. The jaguar and the snake have become indispensable recurring elements (elementals) in the Ayahuasca morphogenic field. So it is likely that the intrepid Western psychonaut will have undulating, serpentine visions, far from the Amazonian rainforest. 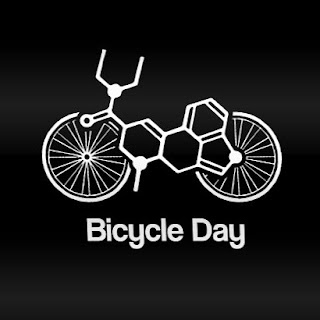 Now, back to the two-wheeled topic at hand… On April 19, 1943, Hofmann ingested 200 micrograms of the 25th variant of the experimental substance, Lysergic Acid Diethylamide… better known as LSD-25. He assumed that 200 mics was an exceedingly miniscule, and hence safe, dose. Less than one hour later, Hofmann experienced sudden and intense changes in perception. He asked his laboratory assistant to escort him home. As was customary in Basel, they made the journey by bicycle.

On the way, Hofmann's condition rapidly deteriorated as he struggled with feelings of anxiety, alternating in his beliefs that the next-door neighbor was a malevolent witch, that he was going insane, and that the LSD had poisoned him. When the house doctor arrived, however, he could detect no physical abnormalities, save for a pair of incredibly dilated pupils. Hofmann was reassured, and soon his terror began to give way to a sense of good fortune and enjoyment, as he later wrote...

“Little by little I could begin to enjoy the unprecedented colors and plays of shapes that persisted behind my closed eyes. Kaleidoscopic, fantastic images surged in on me, alternating, variegated, opening and then closing themselves in circles and spirals, exploding in colored fountains, rearranging and hybridizing themselves in constant flux.”

The events of the first LSD trip, now known as “Bicycle Day,” so named for the bicycle ride home, proved to Hofmann that he had indeed made a significant discovery: a psychoactive substance with extraordinary potency, capable of causing significant shifts of consciousness in incredibly low doses. Hofmann foresaw the drug as a powerful psychiatric tool. Because of its intense and introspective nature, he couldn't imagine anyone using it recreationally. Bicycle Day is increasingly observed in psychedelic communities as a day to celebrate, not only the discovery of LSD… but the expanding culture and deepening  body of LSD’s Morphogenic Field.

The celebration of Bicycle Day originated in DeKalb, Illinois, in 1985, when Thomas B. Roberts, then a Professor at Northern Illinois University, invented the name "Bicycle Day." He founded and held the first celebration at his home. Several years later, he sent an announcement made by one of his students to friends and Internet lists, thus propagating the idea and the celebration. His original intent was to commemorate Hofmann's original, accidental exposure on April 16, but that date fell midweek and was not a good time for the party, so he chose the 19th to honor Hofmann's first intentional exposure. 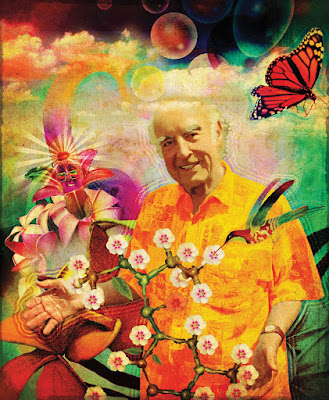 As you might expect, Bicycle Day is one of the eight, high-holy days on the Tek-Gnostics calendar. Along with such other holy days as April Fooles Day and Halloween… Bicycle Day encapsulates the irreverent, whimsical… yet deeply profound nature of such celebrations. Such days of merriment, both ancient and modern… remind us that along with humanity’s pain and sorrow… there is also good reason for joyous frivolity and fun.

The massive intrusion of psychedelia that was sparked by Hofmann, seems more than a coincidence. It appears to be a catalyst of consciousness… an evolutionary tipping point for humanity. It is as if LSD, being first synthesized just prior to WWII, was manufactured as an inoculation to the madness of modernity. Bicycle Day allows us to re-remember our entheogenic past, celebrate our psychedelic present, and contemplate our psychonautic future. So if you are so inclined… if you are “on the bus” …take a moment to celebrate life and times of Dr. Albert Hofmann, and his problem child.

Editorial Note: this post was inspired and adapted from the work of James McClure, and entries on the subject, found on Wikipedia.

Micro synchro perception --pathway to discernment--windows that melt. Synchro-dellic-atmosphere is real. To shine forth is key. 87