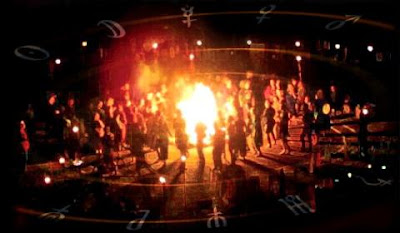 Who knows what evil lurks in the hearts of men? The Shadow knows…


As the year 2010 wanes, the days grow shorter and the shadows grow longer. As the growing season comes to a close, harvesters gather the year’s bounty. As deciduous trees transform into red and gold, only to lose their foliage at the onset of autumn… as the darkness of winter advances… an ancient celebration approaches. On the night when the veil between the world of the living and the dead grows thin, a grateful populace prepares offerings for the dearly departed.

All Hallow’s Eve, or Halloween is upon us... 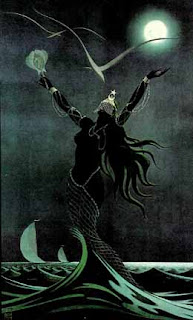 Halloween's origins date back to the ancient Celtic festival of Samhain. The Celts… who lived 2,000 years ago in the area that is now Ireland, the United Kingdom, and northern France, celebrated their new year on November 1. This day marked the end of summer and the harvest and the beginning of the dark, cold winter, a time of year that was often associated with human death. Celts believed that on the night before the new-year, the veil between the worlds of the living and the dead was pierced and visitation from the “other side” was possible.

"During this interval the normal order of the universe is suspended, the barriers between the natural and the supernatural are temporarily removed, this side lies open and all divine beings and the spirits of the dead move freely among men and interfere sometimes maliciously, in their affairs"- (Celtic Mythology, p. 127)

On the night of October 31, they celebrated Samhain, when it was believed that the ghosts of the dead returned to earth. In addition to causing trouble and damaging crops, Celts thought that the presence of the otherworldly spirits made it easier for the Druids, or Celtic priests, to make predictions about the future. For a people entirely dependent on the volatile natural world, these prophecies were an important source of comfort and direction during the long, dark winter.

To commemorate the event, Druids built huge sacred bonfires, where the people gathered to burn crops and animals as sacrifices to the Celtic deities. During the celebration, the Celts wore costumes, typically consisting of animal heads and skins, and attempted to tell each other's fortunes. When the celebration was over, they re-lit their hearth fires, which they had extinguished earlier that evening, from the sacred bonfire to help protect them during the coming winter. 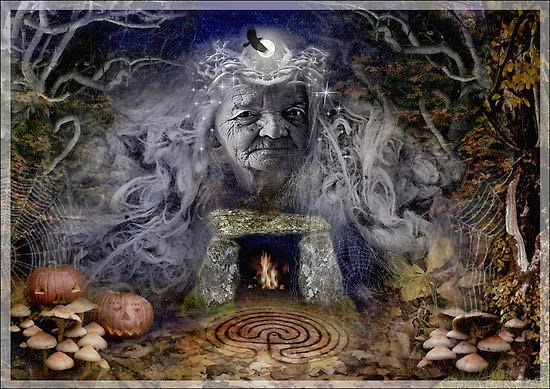 By A.D. 43, Romans had conquered the majority of Celtic territory. In the course of the four hundred years that they ruled the Celtic lands, two festivals of Roman origin were combined with the traditional Celtic celebration of Samhain. The first was Feralia, a day in late October when the Romans traditionally commemorated the passing of the dead. The second was a day to honor Pomona, the Roman goddess of fruit and trees. The symbol of Pomona is the apple and the incorporation of this celebration into Samhain probably explains the tradition of "bobbing" for apples that is practiced today on Halloween.

By the 800s, the influence of Christianity had spread into Celtic lands. In the seventh century, Pope Boniface IV designated November 1 All Saints' Day, a time to honor saints and martyrs. It is widely believed today that the pope was attempting to replace the Celtic festival of the dead with a related, but church-sanctioned holiday. The celebration was also called All-hallows or All-hallowmas (from Middle English Alholowmesse meaning All Saints' Day) and the night before it, the night of Samhain, began to be called All-hallows Eve and, eventually, Halloween. Even later, in A.D. 1000, the church would make November 2 All Souls' Day, a day to honor the dead. It was celebrated similarly to Samhain, with big bonfires, parades, and dressing up in costumes as saints, angels, and devils. Together, the three celebrations, the eve of All Saints', All Saints', and All Souls', were called Hallowmas.

Modern Celebrations around the world

Asia
The Halloween celebration in Hong Kong is known as "Yue Lan" (Festival of the Hungry Ghosts) and is a time when it is believed that spirits roam the world for twenty-four hours. Some people burn pictures of fruit or money at this time, believing these images would reach the spirit world and bring comfort to the ghosts. 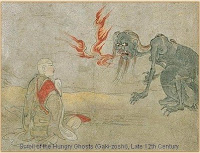 In China, the Halloween festival is known as Teng Chieh. Food and water are placed in front of photographs of family members who have departed while bonfires and lanterns are lit in order to light the paths of the spirits as they travel the earth on Halloween night. Worshippers in Buddhist temples fashion "boats of the law" from paper, some of which are very large, which are then burned in the evening hours. The purpose of this custom is twofold: as a remembrance of the dead and in order to free the spirits of the "pretas" in order that they might ascend to heaven. "Pretas" are the spirits of those who died as a result of an accident or drowning and whose bodies were consequently never buried. The presence of "pretas" among the living is thought by the Chinese to be dangerous. Under the guidance of Buddhist temples, societies are formed to carry out ceremonies for the "pretas," which includes the lighting of lanterns. Monks are invited to recite sacred verses and offerings of fruit are presented.

The Americas
Among Spanish-speaking nations, particularly Mexico, Latin America, and Spain, Halloween is known as "El Dia de los Muertos." the days of the dead, a three-day celebration that begins on the evening of October 31 and culminates on November 2. This is an ancient festivity that has been transformed throughout the years. It was originally intended in prehistoric Mexico to celebrate children and the dead. Mexican families remember their dead and the continuity of life. It is a joyous and happy holiday...a time to remember friends and family who have died. 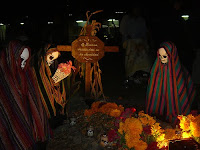 Officially commemorated on November 2 (All Souls' Day), the three-day celebration actually begins on the evening of October 31. Designed to honor the dead who are believed to return to their homes on Halloween, many families construct an altar in their home and decorate it with candy, flowers, photographs, fresh water and samples of the deceased's favorite foods and drinks. Frequently, a basin and towel are left out in order that the spirit can wash prior to indulging in the feast. Candles and incense are burned to help the departed find his or her way home. On November 2, relatives gather at the gravesite to picnic and reminisce.


Relatives also tidy the gravesites of deceased family members, including snipping weeds, making repairs and painting. The grave is then adorned with flowers, wreaths or paper streamers. They bring picnics and sit around the grave sites sharing stories of the departed and feasting on foods such as spicy meat dishes, batter bread and lots of sweets; some shaped like skulls. The abundance of food, drink and good company creates a festive atmosphere along with recognizing the cycle of life by the interaction of the living with the dead. Some of these gatherings may even include tequila and a mariachi band although American Halloween customs are gradually taking over this celebration.

In Mexico during the Autumn, countless numbers of Monarch butterflies return to the shelter of Mexico's oyamel fir trees. It was the belief of the Aztecs that these butterflies bore the spirits of dead ancestors.

In the villages, parades are held. People dress as skeletons and dance in the streets. Often, a live person is placed inside a coffin which is then paraded through the streets while vendors toss fruit, flowers and candies into the casket. Home feast are held and loaves of bread, "Bread of the Dead" are given. Inside the loaves are sugar skeletons or other items of death motif. This gift is more prized if the skull or skeleton is embossed with ones own name. The families also attend candle lit ceremonies in church and offer prayers. The whole celebration is about life from beginning to end.

Europe
In Ireland, which is considered to be where Halloween originated, the day is still celebrated much like it is in the United States. In rural areas, bonfires are lit as they were centuries ago, and all over the country, children get dressed up in costumes and spend the evening "trick-or-treating" in their neighborhoods. After trick-or-treating, most people attend parties with neighbors and friends. At the parties, many games are played, including "snap-apple," a game in which an apple on a string is tied to a doorframe or tree and players attempt to bite the hanging apple. In addition to bobbing for apples, parents often arrange treasure hunts, with candy or pastries as the "treasure." Children are also known to play tricks on their neighbors, such as "knock-a-dolly," a prank in which children knock on the doors of their neighbors, but run away before the door is opened. 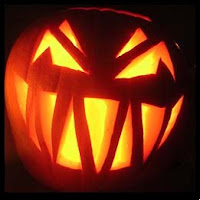 English children made "punkies" out of large beets (which they call beetroots), upon which they carved a design of their choice. Then, they would carry their "punkies" through the streets while singing the "Punkie Night Song" as they knocked on doors and asked for money. Halloween became Guy Fawkes Night and moved a few days later, but recently it has been celebrated on October 31, in addition to Guy Fawkes Night. In some rural areas, turnip lanterns were placed on gateposts to protect homes from the spirits who roamed on Halloween night.

The article above should include Ashland Oregon where all Hallows eve is a very lively play with the dead. I know of no other city in Oregon who celebrates Halloween like Ashland. That said have a fun fright night JP and all Ashland citizens. Dennis from Culp Creek.

Ay, Johnny Buck... Magic is afoot and Goddess is alive!!