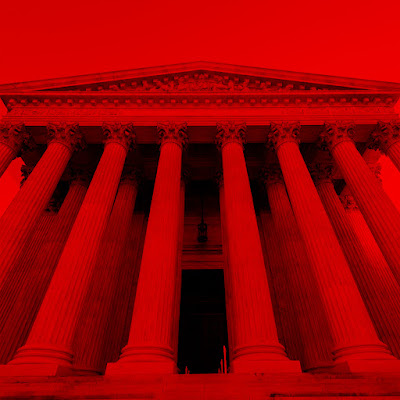 Dateline: July 4, 2022 United States of Amerika...
It was no coincidence that the Not-So Supreme Court waited until after the Summer Solstice to begin their calculated dismantling of long standing civil liberties. They waited to take full advantage of the daily diminishment of light, knowingly and pragmatically instigating their radical, reactionary, alt-right assault on civil rights protections… just as the summer solstice had passed. This was part of the plan.
This was no mere happenstance calendar choice on the part of the Not-So Supreme Court, or more accurately, on those who orchestrated the rise of the radical right contingent of the Court… namely, newly appointed judicial lackeys: Gorsuch, Kavanaugh, and Barret. No… the extreme, alt-right powers, in their decades of planning, leave nothing to chance. They purposely targeted the time of year where the power and influence of planetary light energies begin to diminish.
Such tactics have their roots in dark magical practice. The powers who wish to exterminate true equality and liberty for all, have been waging an occult, black magical campaign for (at least) the last fifty years. They have hidden behind such movements and organizations as the Religious (Xtian) Right and the NRA, and more recently have infiltrated and completely corrupted the Republican Party… and by extension, the Not-So Supreme Court.
Like the buffoons who stormed the U S Capitol on 1/6… these same powers have completely duped the vast majority of the GOP. Contrary to what most MAGA zealots believe… these powers… the ones pulling the strings at the GOP… could not give a rip about them. They just need stooges to act as fall-guy for their dismantling of Rule of Law here in Amerika. This has been the goal of the alt-right power brokers… ever since the Reagan administration.
If you haven’t noticed… the extreme alt-right now occupying the GOP… also has a well-armed terrorist faction that carries out the violent dirty work, dictated by those on high. They have no qualms about storming the Capitol, bombing government buildings and women’s health clinics, or assassinating health clinic doctors. They have no qualms about assaulting LGBTQ gatherings… you get the picture.
BTW… there is nothing even close to comparable on the left. Antifa? Please! Antifa are mostly AWB (always wears black) millennials who have realized that their generation has been sold down the river. During the recent Not-So Supreme Court protests, prompted by the Roe-v-Wade decision… the crowds were impassioned but peaceful. One thing I noticed from news footage was a line of taco trucks at the protest... with long, orderly lines of people waiting to place their order.
At the storming of the capitol building… what I noticed was flak jackets, combat gear, semi-automatic weaponry, and a gallows erected to hang Mike Pence. I also noticed proud boyz and oath keeperz van-guards, coordinating the attack. When given the choice… I will align with outraged sisters and daughters, or black lives matter, or gay pride activists… over white national militias… any day of the week.
And let us be clear… our daughters and sisters… the LGBTQ community… people of color… these are the targets of the "powers that be" on the Right. They will come for us all, one at a time. That is what the dismantling of the Rule of Law is all about. This is how the dark powers on the Right operate.
The Row-V-Wade decision was a decades-long, big-ticket win for the Xtian Right. But as high-profile as this decision was, this is not the what the PTB on the Right are ultimately targeting. Those powers behind the alt-right are hell-bent on eliminating all privacy laws. In a recent article, reporter Kendra Clark writes…
“Roe was fundamentally a privacy ruling. Its reversal has far-reaching implications not only for healthcare and the right to choose, but also for consumer privacy of all kinds, per leading experts. Other Constitutional rights contingent on privacy precedent. .. including same-sex marriage… could be next on the chopping block.”
This is what justice Clarence Thomas was salivating over. 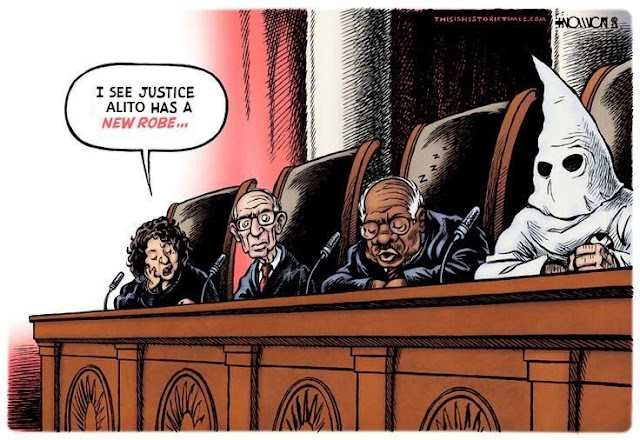 Add to that, the Not-So Supreme Court ruling on limiting Miranda Rights, and the future begins to look pretty bleak for life, liberty and the pursuit of happiness, for all of us. Sure, they’ll go after queer folk first, but everybody… every freedom loving citizen… is on the chopping block. Yeah… they’ll come for us one at a time (don’t even get me started on the recent EPA ruling)…
But with all that said, with all the potential catastrophe for Rule of Law… the thing that really infuriates me… is the smugness of the Xtian Right on abortion rights. How dare these pompous bigots tell anyone what to do with their own bodies… with their self-image… with their sexual preference. Perhaps such avid right-to-life advocates should mind their own f*ing business.

What is so weird about all of the recent erosion of freedoms is the aspect of minority rule. Most folks in this country are freedom loving, live-and-let-live people, who would not begrudge other people’s right to privacy. But the Xtian Right are not most folks. And they currently hold disproportionate power in Amerikan politics. In their pomposity, the Xtian Right are calling the shots, and republicans are going along for the ride. Anything to stay in power, even if it means selling out the American people.

All of this does not bode well for Rule of Law or long standing democratic principles. As I said in a post at the time, the January 6th insurrection felt more like a beginning, than an ending. Moving forward, it appears that we are headed for some dark times. Moving into a cycle of darkness… perpetuated by the sorcerous, alt-right PTB. Again, they leave nothing to chance. This latest assault, instigated just as the summer solstice passed, spells trouble ahead.

Enjoy your 4th of July holiday everybody. We may not have that many more to celebrate. Stay tuned dear readers… other thoughts are forming… to be continued.
Labels: Liberty OP-ED Politics

Dennis/87 said…
Dude, xtian dystopia is neigh. What tomfoolery the governor of Florida enjoys. Texas in same fascist direction.
When compassion is our main passion, we will truly be free.87
July 3, 2022 at 3:54 PM

Anonymous said…
This comment has been removed by a blog administrator.
July 4, 2022 at 2:00 PM