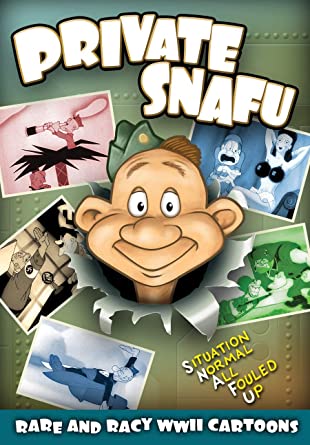 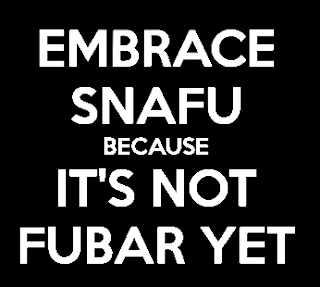 Other fun acronyms that pertain to the situation at hand are...
FUBAR - Fucked Up Beyond All Repair
TARFU - Totally and Royally Fucked Up (alt: things are really fucked up)
Addendum: The above does not address pathology, megalomania, or refusal to accept emerging realities (ie: the conditions on the ground). In our current bureaucratic, socio-pathologic-political structure… non-acceptance of political outcomes demonstrates that bureaucracy is inextricably entwined with hierarchy and narcissism. In his interview, Wilson continues…
Robert Anton Wilson: Another big influence on the SNAFU Principle was Faulkner’s Go Down, Moses. There’s a great sentence in there that goes roughly... "To the sheriff, Lucas was just another nigger and both the sheriff and Lucas knew it; but only one of them knew that to Lucas the sheriff was a redneck without any reason for pride in his forbears nor hope for it in his descendants." And that’s what hierarchy does: it creates a situation where the person on the top doesn’t know what the person on the bottom thinks.
Michael Helm: But there are some people who don’t care.
Robert Anton Wilson: You’re talking about sociopathic personalities. Where they can have a pretty accurate idea of the other person’s condition and still go ahead and trample all over them. What can I say? I don’t claim to have a solution to all the problems of the Universe.
So it is that we must re-learn the pitfalls of bureaucracy. The obstructive nature of bureaucracy has plagued us for ages. The Alt-Right fever dreams of some Deep State is nothing new. The Left-leaning  Counsel on Foreign Relations is no more malicious than the shenanigans of the Counsel for National Policy, on the Right. These bureaucratic entities may be real... they may be bad... but the power of SNAFU will insure that these bureaucracies flounder under their own weight. Rest assured, the Power of the People will find the work-around that leaves tyranny wallowing in its own muck. And so it goes... so don't fret... as crazy as our current conditions seem... the situation is normal...
Posted by Jack Heart at 12/09/2020 11:47:00 AM

I suppose the situation is normal no matter how bad things get. This is the power of the great creeping normal which swallows everything.

Garmr...
Just like "the nothing" in Never Ending Story...

Jack, I thought of that when writing the post, but more than this it is like Back to The Future. The normal not only changes the future but must reach back into the past and change it so what is normal now was also normal then.