In Protest of Tyranny 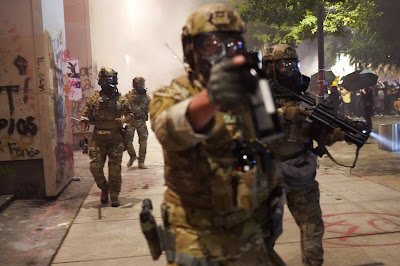 One week ago, insignia-less federal officers in Portland, OR. brutally struck a Navy veteran who said he had approached them simply to ask whether they understood their oath to defend the constitution. One week later, a group of military veterans joined the front lines of the city’s growing protests. In a clear signal to the unmarked federal troops, the wall of vets stood in “parade rest” formation, inferring a de-escalation of violence against the peaceful protestors.

Duston Obermeyer, a Marine Corps veteran, said he and other veterans were there to make sure federal officers did not infringe on the free speech of protesters, who numbered in the thousands. “Our veterans are here specifically to support the rights of the protesters to protest,” said Mr. Obermeyer, who said he had deployed three times during a decade in the Marines.

It has been widely reported that some elements of the dispatched federal troops are part of a specialized Border Patrol group that normally investigates drug smuggling organizations. In a recent interview, Timothy Snyder, historian and author of “On Tyranny – Twenty lessons from the twentieth century” pointed out that the history of autocracy offers several examples of border agents being used against a regime's perceived enemies.

“This is a classic way that violence happens in authoritarian regimes, whether it’s Franco’s Spain or whether it’s the Russian Empire. Violence starts at the borderland. People (troopers) become accustomed to violence at the border, and then what an authoritarian regime does, is that it brings those troopers back into the cities… and uses them against protestors in the cities. Border patrol are trained to think of others as ‘not like us’ as aliens, as foreigners, and are then told that there are people (protestors) inland who are also not like us.”
There is something particularly terrifying in the use of Border Patrol agents against peaceful American dissidents. Reporter Michelle Goldberg has written: “After the attack on protesters near the White House last month, the military pushed back on Trump’s attempts to turn it against the citizenry. Police officers in many cities are willing to brutalize demonstrators, but they’re under local control. U.S. Customs and Border Protection, however, is under federal authority, has leadership that’s fanatically devoted to Trump and is saturated with far-right politics.”

Meanwhile, behind the line of veterans stood Portland’s “Wall of Moms” and “Fathers against Fascism” who were joined by “Teachers Against Tyrants”, Healthcare Workers (in scrubs) & Lawyers for BLM. So here are the battle lines… Moms, dads, teachers and healthcare workers squaring off against storm troopers. 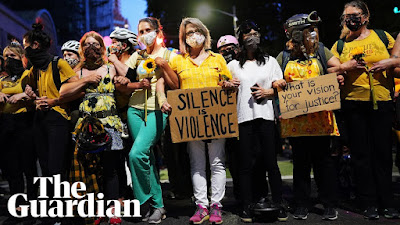 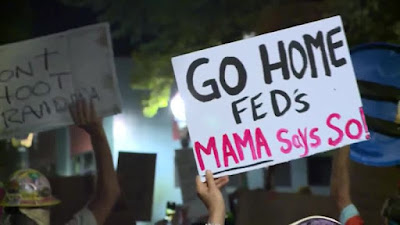 Having grown up on the west coast, I recognize the ideologies. Contrary to popular belief, the West is steeped in conservatism. Once out of the urban areas, Trump signs are everywhere. Like the “War between the States” our modern civil war pits brother against brother… sister against sister. Much of my family are Trump supporters. Although ideals of liberty amongst my Trumpite family members are understandable, their loyalty to the Orange One are entirely misplaced.
The reality is, with the deployment of unmarked federal troops in Portland, we suddenly find ourselves well down the road to a Fascist State. And by the way, Trump could give a rip for his constituency. It is apparent that he despises your average “Joe Trump” supporter. He would literally call the cops on any supporter who dared to even touch his car, or loiter outside Trump Tower.

It is also apparent that there are those in the Trump administration who consider Trump a patsy. As they go about their fascist agenda, they do so without fear of repercussion, as Trump… despised as he is by many Americans… will take the fall for their wanton destruction of rule of law. So with a handy fall-guy, they unabashedly pursue their worst fascist impulses... I’m looking at you, Stephen Miller. 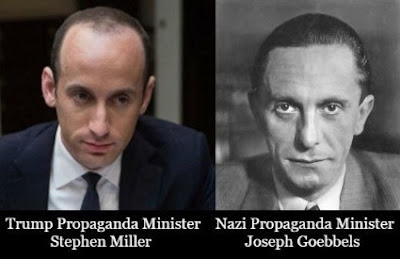 In an interesting synchronicity, while the Wall of Moms were collectively protesting in favor of Black Lives Matter (among other things) in Portland… Rep. Alexandria Ocasio-Cortez (D-N.Y.) was battling a very personal verbal assault by Sen. Ted Yayhoo Yoho (R-FL). “It is cultural,” Ocasio-Cortez said. “It is a culture of a lack of impunity, of acceptance of violence and violent language against women, an entire structure of power that supports that.”

The moms in Portland and AOC in Washington DC share a synchronous moment of reckoning that goes beyond Me 2 and BLM… to speak to the emergent recognition of systemic racism and sexism within our predator/dominator culture… and the rise of individual sanctity, dignity and equality, as evidenced by the rise of the sacred feminine.

Ever since Trump’s “American Carnage” inauguration speech, there has been a debate about whether the president’s authoritarianism is tempered by his incompetence. Those who think concern about fascism is overblown may point to instances when the administration has been thwarted after it's overreach. But all too often the White House has persevered, eroding American rule of law until what once seemed like worst-case scenarios, have become the status quo.

And so these are the fascist times we find ourselves in. This isn’t academic… it’s real. Time is running out on our ability to prevail over the tyrannical powers that have gathered in the American Government… and within the American psyche. If you are still uncertain on exactly where you stand… please refer to the handy chart below…

Note the placement of anarchist protest on both the left and the right of the spectrum. As societies approach either extreme, specific factions are triggered. The examples on the right, the Charlottesville protests and "Proud Boys." An example on the left being "antifa." As Trump proclaimed antifa a terrorist organization, you have to ask yourself... "if you are not ant-fascist, what are you?"

In closing… there has been much made of the whole “Defund the Police” messaging among progressives. Such rhetoric is an example of overreach on the left. A certain amount of law enforcement is an obvious necessity… especially the American County Sheriff system. Although some County Sheriffs have been known to abuse their position, they are elected officials, and can consequently be voted out of office, should they betray the public trust.

A better call to action is to…

Dismantle the Department of Homeland Security

This obtrusive government agency was never a good idea… not even just after the 9/11 tragedy… Fast forward to today, the President has deployed unidentified federal agents from the Department of Homeland Security and sub-agencies to Portland over the objection of local and state governments. These agents have subsequently escalated conflict, beaten, shot, and gassed peaceful protesters, and kidnapped others off the street in unmarked vehicles. The President has threatened to deploy more agents to Chicago and other "Democrat" cities, against the will of the States.

It has become clear that the Department of Homeland Security has exceeded its original purpose. It has been transformed into a secret police force used by the (any) President to inflict terror against those with whose politics he disagrees.

Where the Department of Homeland Security has become an unaccountable police agency utilizing brutal and excessive force against peaceful Americans exercising their First Amendment Rights in Portland, and where such force is deployed against the will of local and State governments, and where this terror is expected to be utilized nationwide for primarily political purposes, the prudent course of action is to request that Congress act swiftly to disband the Department of Homeland Security.

Seem far-fetched? Seem overly reactionary? The November elections are 100 days away… and between now and then, some crazy-ass shit will go down. The time is now to stand up against tyranny. Do you support the Republic? Do you support Democracy? Let your voice be heard now, before it's too late. Any form or act of protest that you choose, will be a blow against the Empire... the more creative, the better. Better that each of our voices are heard now. After November, it may be too late. Constant vigilance! 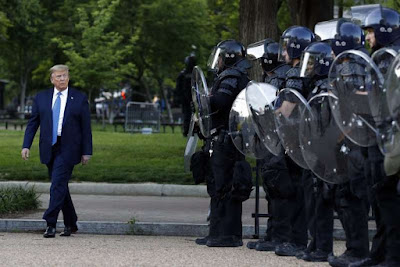 The longest trip in our life, from your head to your heart. People know that 45 is a fascist. The election is already being manipulated! Get up-stand up! This country is a republic. If it was a democracy, 45 would be Hillary. She received 3 million more votes than the current president. Get up-stand up!
The landslide for Biden will be broadcast. It is time to be political. Our children deserve better than 45. Get up-stand up!!! 87