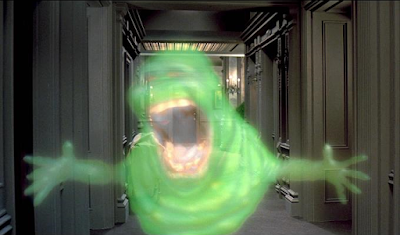 Peter Venkman: We came, we saw, we kicked its ass!

Hotel Manager: Did you see it? What was it?

Ray Stantz: (holding up the steaming ghost-trap) We got it!

Hotel Manager: What is it? Will there be any more of them?

Ray Stantz: Sir, what you had there was what we referred to as a focused, non-terminal repeating phantasm, or a Class-5 full-roaming vapor. Real nasty one, too.

Peter Venkman: And now... let's talk seriously. Now, for the entrapment, we're gonna have to ask you for four big ones, $4,000 for that, but we are having a special this week on proton charging and storage of the beast, and that's only going to come to $1,000, fortunately.

Peter Venkman: Well, that's all right. We can just put it right back in there.

Hotel Manager: No, no, no, no! All right. Anything.

Ray Stantz: Thank you. Hope we can help you again. (to the hotel guests) Coming through! One Class-5 full-roaming vapor. Move 'em out!


...from the original Ghostbusters


Ancient Scotland & Samhain
To the ancient Celts, Samhain was seen as a time when the veil between our world and the Otherworld was thinnest. A time when the 'door' to the Realm of the Dead opened enough for the souls of the dead, and other beings, to come into our world. Feasts were had, at which the souls of dead clan & kin were beckoned to attend and a place set at the table for them. As such, Samhain has been likened to a festival of the dead, held by many cultures throughout the world in honor or recognition of deceased members of the community.

All Hallow's Eve
During this interval the normal order of the universe is suspended, the barriers between the natural and the supernatural are temporarily removed, this side lies open and all divine beings and the spirits of the dead move freely among men and interfere sometimes maliciously, in their affairs"- (Celtic Mythology, p. 127)

Guy Fawkes Night
Remember, Remember the 5th of November... Bonfire Night is an annual celebration on the evening of the 5th of November. It marks the downfall of the Gunpowder Plot of 5 November 1605, in which a number of Catholic conspirators, including Guy Fawkes, attempted to blow up the Houses of Parliament, in London, United Kingdom.

Tales of the Raven
Once upon a midnight dreary, while I pondered, weak and weary, Over many a quaint and curious volume of forgotten lore...