What Would Hunter Do? 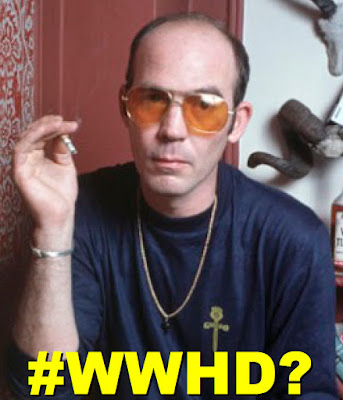 “We can't stop here... this is bat country!”
- Hunter S. Thompson - from Fear and Loathing in Las Vegas

Are you still thinking like its 2016? Such thinking will avail you naught. This is 2017 and we must come to grips with the fact that we are all living in Bat Country. The world has gone bat-shit crazy. Really weird drugs have kicked in on a National level... mass hallucinations… dogs living with cats! The worst type of alt-right conspiracy theorists are running amok in the White House. The President appears unhinged. I can’t shake the vision of the President locked in the West Wing bathroom, trousers around his ankles, furiously tweeting, while aids are banging on the door shouting: “Mr. President! Unlock the door this instant!”

Bear in mind that this sensationalism is more a product of corporate & network level commercialism, than it is a reflection of individual journalist’s integrity. Just because the networks have sold out, doesn’t mean that journalists have… or that journalism is dead. There are still many hard-hitting reporters out there, digging deep while upholding the highest professional and ethical standards. The 4th Estate isn’t dead… it’s just morphing. After all… this is 2017. This is Bat Country! 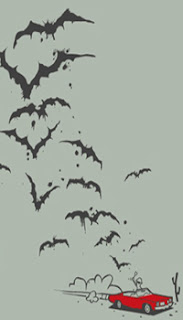 Speaking of hard-hitting journalists… those of you, who have occupied our planet for a half-century or so, may well remember an exceptionally deranged-yet-brilliant journalist by the name of Hunter S Thompson. Thompson was not only a talented journalist and author… he was the creator and chief proponent of what has euphemistically been called: Gonzo Journalism. He was also a raving lunatic and creator, curator and principal resident of Bat Country.  The following is a short bio from Wikipedia…

Hunter S Thompson (July 18, 1937 – February 20, 2005) was an American journalist and author, and the founder of the gonzo journalism movement. Thompson became internationally known with the publication of Hell's Angels: The Strange and Terrible Saga of the Outlaw Motorcycle Gangs (1967). For his research on the book he had spent a year living and riding with the Angels, experiencing their lives and hearing their stories first-hand.

Previously a relatively conventional journalist, with the publication in 1970 of The Kentucky Derby Is Decadent and Depraved he became a counter-cultural figure, with his own brand of New Journalism which he termed "Gonzo", an experimental style of journalism where reporters involve themselves in the action to such a degree that they become central figures of their stories. The work he remains best known for: Fear and Loathing in Las Vegas: A Savage Journey to the Heart of the American Dream (1971), constitutes a rumination on the failures (and triumphs!) of the 1960s counterculture movement.

Beginning in late 1971 Thompson wrote extensively for Rolling Stone on election campaigns of President Richard Nixon and his unsuccessful opponent, Senator George McGovern. The articles were soon combined and published as: Fear and Loathing on the Campaign Trail '72. As the title suggests, Thompson spent nearly all of his time traveling the "campaign trail", focusing largely on the Democratic Party's primaries - Nixon, as the Republican incumbent, performed little campaign work - in which McGovern competed with rival candidates Edmund Muskie and Hubert Humphrey. Thompson was an early supporter of McGovern and wrote unflattering coverage of the rival campaigns in the increasingly widely read Rolling Stone.

Recently, the press has gone to great lengths to draw a correlation between the 37th President of these United States: Richard M Nixon… and the 45th President: Donald J Trump. In his time, especially during his fall, “Tricky Dick” was broadly considered to be exceedingly underhanded and dishonest. He was notorious for using his Black Ops “Plumbers” for nefarious activities, most famously the Watergate break-in. He also had a legendary disdain for the press. These and other similarities beg for comparison to Trump. 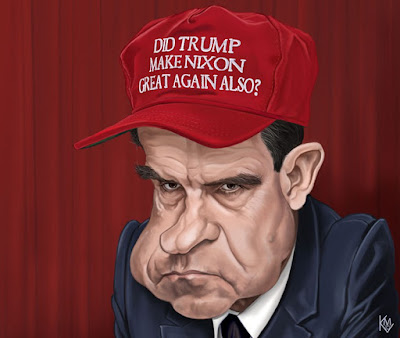 Like Tricky Dick, Trump enjoys an unsavory reputation for dishonesty… if not being a serial, pathological liar. Like Nixon, this appears to stem from an extreme inferiority complex and excessive overcompensation. Trump’s opinion of the press exceeds that of Nixon. His intent is to dismantle the 4th Estate, which he views as obstructive to his complete control. Trump’s actions and demeanor are strong indicators that he is either crazy… or crazy like a fox.

Consequently… here in Bat Country… we are all left scratching our heads, and not a little concerned for our safety in an increasingly uncertain future. At this most unsettling juncture, the question becomes…

What would Hunter Do?

How would our dearly departed gonzo journalist view the Trump Presidency? We know how Hunter reacted to Nixon’s reign. Would Hunter denounce Trump as a fascist? Would Hunter deride him as a buffoon? …A narcissistic child with a twitter account? How would Hunter chronicle these bizarrely weird times we live in? What would Hunter do?

I suspect that Hunter would be out there on the front lines... living by one of his most famous quotes…


“When the going gets weird, the weird turn pro”