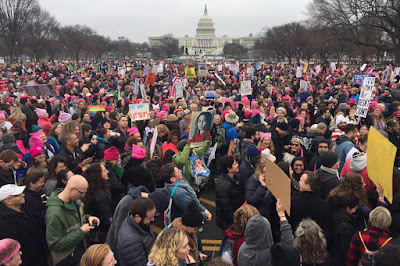 Will wonders never cease! On January 20th & 21st… the American public has been given the gift of new beginnings. One vision of such was presented to us by our new president on Friday, in his inauguration speech (Another vision was characterized by the more massively attended Woman's March on Washington on Saturday). Sure, Trump's vision was a dark, dystopic one, with fascist undertones… but this is the vision that the Donald advertised during his hit reality show presidential campaign. Corporatocacy, here we come.

For those of us who voted for Trump… it’s time to own his vision of Amerika. Remember, he promised not to touch Medicare and Social Security… America’s desperately needed social safety nets. In this day and age of massive population migration caused by war and climate change… of massive unemployment due to globalization and automation… we will need these safety nets more than ever. Now is the time to increase such programs, during such a profound cultural transition, not eliminate them. Reality check: the jobs are not coming back.

For those of us who didn’t vote for the Donald, a couple of things… first: buck it up! Now is not the time to whine… it is the time to rise as part of the loyal opposition… as activists in the American resistance movement. If we don’t like the Donald’s vision… we must come up with an alternative… bring something better, more creative, to the table. Elements of such include: compassion, tolerance, peace, unity and love. In the tradition of the trickster, Operation MindFuck is a good place to start.

(besides... it's fun being weird, you should try it some time!)

Second: it’s always darkest right before the dawn. We need to move together to bring about a future we can all live with. Don’t despair! We must be brave and keep the faith that darkness will give way to light. Together we can build a compassionate future… but we will have to work for it! Nothing good comes easy… It’s roll-up-sleeves time.

Lastly, a reminder to us all… We are all in this together. Regardless of our good intentions, we are here now. As the French philosopher, Joseph de Maistre said: “Every nation gets the government it deserves.” So again… in these dark times, the American public has been given the precious gift of new beginnings… let us embrace the opportunity for change… for change is the only true constant in Universe! Let us all inaugurate the power of love… right where we are standing now. Let us seize this inaugural opportunity to move together into a shared brave new future where all peoples, regardless of creed, ethnicity or gender... enjoy the inalienable rights of life, liberty and the pursuit of happiness.

After all... isn't that what America is all about?