Back in 2012… we did a series of posts concerning what is known within “Pop Culture” as: Ancient Astronaut Theory (AAT).  The most common and intellectually accessible understanding of ATT involves the notion that highly advanced extraterrestrial beings had visited Earth in its antiquity and made “first contact” with our distant ancestors. According to archaeological conventional wisdom, mankind developed cultural and technological sophistication within the last 10,000 years. According to ATT, this “explosion in intelligence was triggered by this first contact.  Here is an excerpt from part one of that series…

“According to ancient astronaut theory, the apparently miraculous achievements of antiquity… such as the construction of the great pyramids in Egypt and Central America, the Moai stone heads of Easter Island and the Nazca lines of Peru… are remnant examples of this ancient intervention. Per this theory, all prehistoric knowledge, religion, and culture either came directly from extraterrestrial visitors, or were developed as a result of the influence of a cultural incubator or “mother culture" of extra-terrestrial origin.”

Part One: ATT: Are the World’s Religions Cargo Cults?


In part two of the series, we explored a more intriguing concept, of what can be referred to as Ultra-Terrestrial Theory (UTT). Unlike ATT, wherein humanity is visited and assisted by off-world ancient aliens, the explosion of cultural intelligence and development was triggered by a much more ancient, preexisting terrestrial “mother culture.” From part two…

“The idea of a pan-global, millennia old, technologically advanced (earthling) civilization that has for reasons of their own remained hidden from most, if not all of humanity, seems unlikely at first glance. But in comparison to AAT considered in part one, UTT would answer or “fit” all of the same criteria concerning humanity’s amazing feats of antiquity and mythological similarity, as well as solve the insurmountable challenges of  physical inter-stellar space travel. UFOs of earthly, ultra-terrestrial origin would not have to contend with the unfathomable distances between star systems.” Recent archaeological excavations on the Island of Java, in Indonesia… have called into question the conventional 10,000 year theory, for the rise of humanity. The controversial findings of this most recent study, pushes humanity’s reign back an additional 15,000 years. Findings such as these shed new light on the ultra-terrestrial theory.

“The geophysical evidence is unambiguous… Gunung Padang is not a natural hill but a man-made pyramid and the origins of construction here go back long before the end of the last Ice Age. Since the work is massive even at the deepest levels, and bears witness to the kinds of sophisticated construction skills that were deployed to build the pyramids of Egypt or the largest megalithic sites of Europe, I can only conclude that we’re looking at the work of a lost civilization and a fairly advanced one.”
- Dr D. H. Natawidjaja

Gunung Padang is a megalithic site located in Karyamukti village, in the West Java Province of Indonesia, 30 miles southwest of the city of Cianjur and 55 miles from the capital Jakarta. It has been called the largest megalithic site in all of Southeastern Asia, and has produced carbon dating results which, if confirmed, suggest it is extraordinarily old. 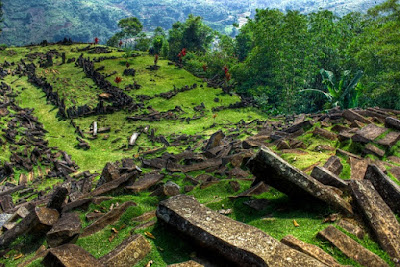 Since its first exploration by archaeologists in 1914 the site was thought to be a natural hill with 2,500 year-old megalithic structures on top of it. But in 2010 geologist Dr Danny Hilman Natawidjaja (who earned his doctorate at Cal Tech) recognized this “hill” as a possible man-made pyramid and began to explore it using ground penetrating radar, seismic tomography, resistivity survey and other remote sensing techniques, as well as some direct excavations and deep core drilling.

The results were immediately intriguing… producing evidence of deeply buried man-made chambers and yielding carbon dates going back as far as 26,000 years. This was the last Ice Age when our ancestors are supposed (according to the orthodox archaeological model) to be have been nothing more than primitive hunter gatherers incapable of large-scale construction and engineering feats. Was it possible that geologist Natawidjaja was unearthing the proof of a lost advanced civilization of prehistoric antiquity? Excavations have produced results that prove beyond doubt that Gunung Padang in indeed a man-made pyramid of great antiquity as Dr Natawidjaja had long ago proposed. Even the relatively young layer so far excavated (the second artificial columnar rock-layer beneath the megalithic site visible on the surface) has yielded dates of 5200 BC (nearly 3000 years older than the orthodox dating for the Pyramids of Giza in Egypt) and there are firm indications from the original remote sensing and core drilling work of much older layers below. In short, it is now evident to all that the site is vastly older than the 2500 years that archaeologists had insisted upon for decades. Even the most hostile amongst them are therefore now reframing their assessment of the site and referring to it as “a gigantic terraced tomb, which was part of the biggest megalithic culture in the archipelago.”

The above was taken in part from an article appearing at the “Mysterious Universe” website.

…and the work of Andrew Collins & Graham Hancock.