Planet of the Apes Politics – Pt 2 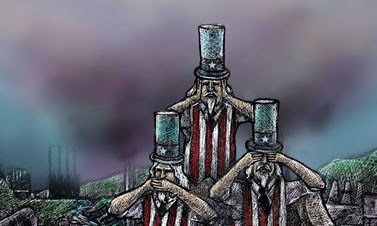 As discussed in our earlier post, the outlook for the 2012 election is… desperate as usual. Beyond normal political rivalry, a deep philosophic divide separates the Democratic and Republican world views. The outcome of the presidential race will, to a great extent, dictate the course of ’s future. The choice appears to be between Laissez-faire capitalism & renewed militaristic adventurism on one side, and entitlement maintenance & health care reform on the other. The American public, upon making this decision in November, is on a collision course with a brave new world order.
Predictably, our politicians only rehash tired 20th century political concepts, such as “trickledown economics” …in the hopes that failed policies of the last century will somehow be applicable to 21st century socio-economic conundrums. For better or worse, humanity’s economic, political, social & spiritual landscape is in the process of rapid transformation… and for the citizenry; things will never be the same.
The was once an industrial powerhouse with unmatched manufacturing capabilities. As the astute reader knows, the manufacturing economy was dismantled over the last 30 years. For … the time of industrial might has come and gone. A manufacturing economy (and the jobs that went with it) as the knew it in the 50s/60s/70s is gone forever… it is never coming back. Yet politicians continue to speak of the past as if it is the future.
Both presidential candidates spin their version of bringing back manufacturing jobs. Romney & the Republicans speak reverently of big-business as being “job creators” …giving big-business tax breaks and other incentives will magically create more jobs, thereby eliminating our current high un-employment rate. Big business as job creators is a myth. The obvious truth is… the last thing any business owner wants to do is hire more employees. Adding more employees to payroll is the last resort in any business… they will do everything they can not to hire… including outsourcing. Enter the global economy.
If a return to manufacturing is not in the plutocrat’s game-plan… what is? The role that the global elites foresee for the “Land of the Free” is a return to an extractive economy... gas, oil, mining, timber… a good old fashioned, god-fearing extractive economy. Without a manufacturing base… this is the only economy that is left for . Evidence of this is the renewed interest in the extraction of gas and oil shale, and the associated international delivery of said products. Remember the Keystone Pipeline?
Big oil is all a-twitter over natural gas and its extraction technique, popularly known as “fracking.” It is no coincidence that considerable environmental concerns have risen around the practice of fracking. Ground water contamination, risks to air quality, migration of gases and hydraulic fracturing chemicals to the surface, mishandling of waste, health effects associated with all of the above… the list goes on. Any large scale harvesting of natural resources brings with it environmental degradation… sadly, this is an inescapable reality.

Again, the return to an extractive economy will bring devastating environmental consequences… especially if done on the massive scale that we have seen in the past. The plutocrats’ global plan is all-inclusive, but not visionary. It still relies upon the imperialistic strategies of exploitation of the past… only on a grander, global scale. These practices of the past have painfully illustrated that bigger isn’t better.
So if we don’t want to go along with the globalist’s economic agenda… what are the alternatives?
One such alternative that focuses on the micro-level of community development, rather than the macro-level of global development, is the Resilient Community movement. The resilient community is a practical application of the old adage… “Think globally & act locally.”
The resilient community movement is a means whereby local communities, be they physical… as in neighborhoods, villages or cities… or virtual… as in on-line communities, build strength and sustainability through self sufficiency. A resilient community has the capability to anticipate risk, limit impact and bounce back rapidly through survival, adaptability, evolution and growth… in the face of turbulent change.
The resilient community’s philosophic premise is that the fundamental flaw in global capitalism is its inability to sustain such a massive economic structure. The global transport of goods and raw materials is ultimately doomed to fail by virtue of its increasing impracticality. In this regard, the resilient community is a response to the State (imperialistic) imposed global economy (read: brave new world order) and those architects (plutocrats) behind it. Even on the eve of the Globalists self-perceived final victory, the world economy is imploding upon itself due to its underlying un-sustainability.
Although the resilient community draws examples from historically successful communities, they learn from the past… they do not repeat it. Rather, the resilient community is a networked version of community, wherein geographic communities are connected via modern telecommunication. A network of individually autonomous communities, wired to the globally intact internet, becomes a viable alternative to a top-down global economy. Put another way, the resilient community is a competing vision for a global economic system… locally based.
More information on the Resilient Community can be found at the following links…
EcoTek (in house) ~ Healthy & Resilient Communities ~ John Robb’s Resilient Communities
As for the election on the "planet of the apes" this November... vote early & vote often...

What fun, in this blog to capture the soul of what is real. Kudos to all who enjoy such profundities. Jack Heart you are amazing.! 87

Right back at ya! Your comments here & elsewhere continue to enlighten and entertain!