Final Secret of the Illuminati 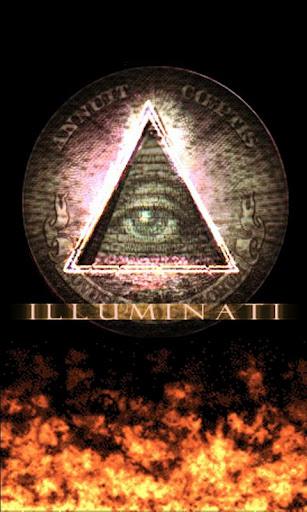 There are those who say that the illuminati are a benevolent "great white brotherhood" of ascended masters, shepherding humanity toward a new illuminated era. These “enlightened ones” are watching… and at times directing the course of human affairs to insure that a new age of world brotherhood and peace is hastened into existence. This secret organization of mystics, this “counsel of light” is essentially guiding the spiritual development of the human race.

Others say that the illuminati are an ancient secret society, manipulating humanity for their own sinister purposes. They are the cloaked dagger in the dark… the unseen hand shaping history… the puppet masters of the geo-political realm. They direct world affairs from behind the scenes, through their control of present day governments and corporations. To them, humanity is but a resource… a means to and end.

The question is… which scenario is correct? Do the Illuminati embrace the light or the dark side? Or is it both? Regardless... this is exactly what We want you to think...

As we have said, many times before… humans are essentially story tellers. As such, we especially love scary stories… we love to have the bejesus scared out of us by tales, both literal and figurative, of ghosts, goblins and things that go bump in the night. The thing is… we sometimes mistake the ghost story for reality. Sometimes, the stories we tell ourselves… parables, meant to illuminate the human condition… stories, meant to entertain and instruct… get confused with actual world events.

One of our favorite ghost stories at Tek-Gnostics, is the serial saga of those dastardly devils of deceit, the illuminati. Historically, the illuminati referred to any one of several secret societies that were all the rage in the 18th Century. In modern times, the word illuminati (Latin for enlightened ones) is a generic term used to describe and personify every foul conspiracy theory of world domination and control, every perceived threat, both terrestrial and extra-terrestrial… ever imagined. Every real and imaginary organization from the International Banking Cartel, the World Bank and the IMF, to the United Nations, NASA and the World Wildlife Fund, are not above suspicion. Don’t even get me started on the Bilderbergers and the Bohemian Grove.
In the modern era, beginning with President “Ike” Eisenhower’s dire warning of the rise of a Military Industrial Complex, the idea of peaceful nation/states, governed by a duly elected representative body, seems… increasingly less likely. New powers of influence began to erode governmental checks and balances. The subsequent development of a global economy adds to the suspicious fear of a “New World Order” in the minds of many. Advancements in information technologies with a potential for mass surveillance, only confirmed these worst fears of a vast conspiracy, perpetrated by a global elite. Thus did our collective angst ferment.

To distill this shared angst down to a potent and poisonous brew… we bottle it and label it fear. Fear of loss of control over the presumed individual freedoms of life, liberty and the pursuit of happiness. Fear of the demise of the American Dream. Fear that individual citizens are being disenfranchised and are at the mercy of heartless, inhumane worldly powers that be. Fear that the old ways… our conventional understanding of rule of law, nearly realized around the world… is morphing… rearranging into something darker, more sinister. The world we knew of law and order is rapidly transforming into a new world order that is incomprehensible and incongruent to common sense… a bitter draught indeed.

If fear is the foul spirit of our angst, the grim mask that we affix to it… the personification we infuse into it… the demon we invoke… is none other than the illuminati.

Having a shadowy cabal in which to place the blame for all the injustices of our rapidly changing world is oddly comforting. It provides us with an intangible, yet convenient bogeyman to focus blame upon and to direct fear and loathing toward. It simplifies an otherwise unfathomable geo-political and religious landscape. It creates an arch-nemesis that is responsible for all the ills of a changing world. Better to accuse a vast, centuries old conspiracy of orchestrating our current planetary chaos, than to consider (let alone accept) that our global culture is fast spinning out of control… through emerging processes that are beyond our understanding. 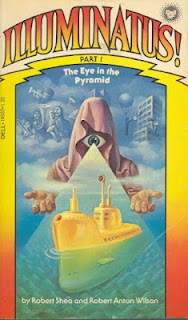 Back in the 70s and into the 80s, the illuminati was as much a left-wing “liberal” mind-blowing prank, as it was right-wing “John Bircher” paranoia. Robert Anton Wilson and Robert Shea had published the Illuminatus trilogy… Steve Jackson had even produced a card game entitled… Illuminati: the game of Conspiracy. All of which was received warmly and with good humor by left-wing hipsters, libertarians, emerging cyberpunks and right-wing fundamentalists alike. Then, something strange and unexpected occurred. Certain segments of the population, who shall remain nameless, began to forget that all the so-called illuminati shtick was a joke. They began to believe the prank.

By the time we hit the millennium, the illuminati were “in bed” with militant Christian fundamentalists, UFO/alien conspiracy theorists, prophets of the apocalypse and an eccentric assortment of neo-con enthusiasts. Each faction thinking that the others are evil or nuts or both… but that their paranoia is the real truth. After 9/11, it became all too clear that these factions no longer thought that the illuminati were anything to joke about. The rise of the “Tea Party” demonstrates just how potent a brew fear is. The co-opting of the tea party by the Koch brothers, demonstrates how a popular grass roots movement can be hijacked by a powerful few.

What began as a joke, became a very real (perceived) threat, in the fevered minds of many strong and well organized religious and political factions. In a way, the eventual transformation from joke to serious, misguided menace was inevitable. After all… if you don’t have a sense of humor… it’s just not funny.

The Hand Beneath the Bed

There are those among us who have not forgotten that the whole illuminati fervor is nothing but a joke. There are a few of us who are mindful that the demonized, generic term “illuminati” is just a mask… a caricature… a ghost story. Illuminati is but a straw dog… a vapor… a bogeyman, meant to scare children during bed-time stories. Apparently, the (ficticious) illuminati have done a very good job, fulfilling their role as the "hand beneath the bed," for whole sections of our populace are “scared straight” by the mere mention of the word illuminati. Not bad for a non-existent cabal.

Remembering that the illuminati are but a hob-goblin, we love to poke fun and be entertained by the phenomena. We at Tek-Gnostics use the term illuminati as an analogy. We utilize the mythological cabal as a melodramatic villain to point to during our ghost story. The illuminati can be used as a generic allegory for the 1%... the super rich who manipulate whole national economies for profit. The illuminati can stand in or represent the “masters of war” …global gun-runners who destroy whole populations by selling them ever increasingly lethal weapons… inventing and instigating regional conflict in order to move product. These powerful individuals and their corporations are not a joke and must be taken seriously.

As for the illuminati, we use them as a character in our tales… but we remember that it is just a scary bed-time story, after all. We weave our tales and have our fun. In so doing, we must also be mindful that we are “letting the genie out of the bottle.” Fear can be fun as entertainment… in a ghost story… but it can also be a powerful manipulator by the few, to control the many. Be mindful of the metaphors. Lastly, remember this important truth… there is an emotion that is more powerful that fear… and that emotion is love. Love is the light that eliminates the darkness by its mere presence… knowing this is the true "final secret" …and is a tale worth telling.

There are many events in life… often tragic… that cause needless suffering. When we witness the horror of man’s inhumanity to man… the senseless atrocity… the comedy of errors that is the hallmark of modern bureaucracy… we can either laugh or cry. For at the end of the day, there is a fine line between tragedy and comedy. But it is precisely in how we react to these events that our character is truly tested. Our reaction in these moments of tribulation is also our opportunity for personal growth, both as individuals and as a species.

Whether we are examining a fictitious cabal, whose name is largely kept alive by the ultra-conservative religious right… or examining the plutocracy that controls vast multi-national empires… we, by virtue of our free will, possess the power to choose the manner in which we respond.

These tragic events, coupled with the nefarious deeds of the above-mentioned powerful few (who control governments, as well as economies) are the very real instigators and perpetrators of our planetary woes. We choose to make fun of these seemingly un-stoppable forces… precisely because it is either laugh or cry in a situation such as this. We believe that by poking fun at those responsible, we diminish their power… even in the face of the horror. By making fun of “the illuminati” we counteract fear with mirth… we offset horror with humor. We “engage the enemy” with our very irreverence. We enjoin violence with vaudeville.

It has been said that fools rush in where the wise fear to tread. Do not underestimate the power of the fool. We at Tek-Gnostics believe that what this planet needs, at this most critical point in time in our spiritual and planetary evolution… are fewer fear-driven reactionaries… and more fools. This may sound crazy but it was none-other than the jester… the lowly fool… who could ridicule the king without fear of beheading. None but the fool dare speak the truth.

It has also been said that humor is a sign of intelligence. Lord knows that the evil bastards who run things do not possess a sense of humor. Pity… for a little laughter goes a long way… and in the final analysis… as we mentioned earlier… if you don’t have a sense of humor… it’s just not funny. BAZINGA!

Robert Anton Wilson is the greatest prankster who ever lived. I still know the Illuminati is real though.

That is precisely what they want you to think!

"In the modern era, beginning with President “Ike” Eisenhower’s dire warning of the rise of a Military Industrial Complex..."

In the words of another american president, FDR...

"There is nothing to fear except fear itself" !

Your point is the essence of tek-gnostics… each individual taking responsibility for their relationship with universe. This includes filtering information from various media sources… “Babylon Bandwidth.” We must develop the discernment to recognize the “shit from the shinola.”