A renowned philosopher was visiting the Tek-Gnostics temple. While he was admiring the abbey and surrounding grounds, he was granted an audience with the abbey’s headmaster, Sensei. After paying his respects, the philosopher asked the Holy Man the nature of the world, to which the old man replied…

"Oh, the world is a great big ball that sits on the great flat back of the Great World Turtle!"

The philosopher, who was prone to bouts of logic, thought a moment and then asked… "What does the turtle stand on?"

To this, Sensei replied… "Why on the back of an even larger turtle of course!"

Then the philosopher asked… "And what, pray tell, does this turtle stand on?"

The rascally old sage, taking pity on the philosopher, shook his head and sweetly smiled, saying: 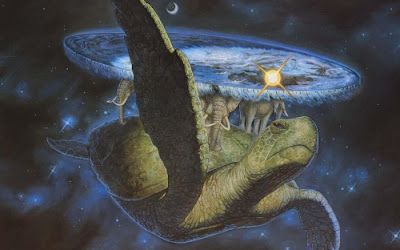 In Hindu mythology, the terrapin, or turtle is nothing less than the foundation of universe. In the myth, the world is supported by four elephants that stand upon the shell of a great turtle…

Akupara is a tortoise in Hindu legends who carries the world on his back upholding the earth and sea.

In one Vedic myth, a great flood regularly occurs every four billion years and completely dissolves the earth. The god Vishnu then returns as his second avatar (or, earthly incarnation), the tortoise Kurma. On his back rests (the eastern mountain of the four buttresses of the World Mountain/Mt. Meru); it serves as the gods’ churning rod to remake the earth from the sea of milk. 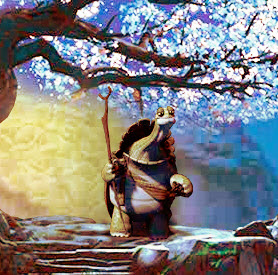 Dreamworks Animation’s Kung Fu Panda franchise… set in a fantasy wuxia genre version of Ancient China populated by humanoid animals… features Grand Master Oogway, an elderly tortoise who is the founder of kung fu itself. Highly venerated for his wisdom, knowledge and experience, Grand Master Oogway is considered to be a great sage. Among all the proverbs he recites, his most recurring is...

"There are no accidents."

Within the Grateful Dead mythology, the Terrapin plays a central role. The epic Terrapin Station, written by the Hunter/Garcia team and sung by Garcia (August 1, 1942 – ) is one of the Dead’s most profound songs.

After the rich archetypical imagery of “Lady with a Fan” concludes, the central theme of Terrapin Station explodes with the lyric… Inspiration! …move me brightly! This opening line invokes the muse with a prayer-like supplication, in keeping with the ancient Greek poets. Terrapin’s lyrics carry the connotation that Terrapin Station is the Earth herself… in the shadow of the moon. The song builds in intensity, culminating in the proclamation…

Terrapin! I can’t figure out… (terrapin) if it’s the end or beginning… (terrapin) but the train’s put it’s brakes on… (terrapin) and the whistle is screaming… Terrapin!

In keeping with this imagery, the song’s earlier line suggests… Some rise… some fall… some climb… to get to Terrapin. 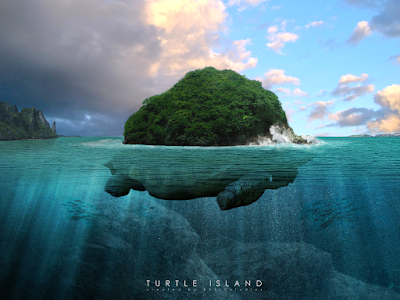 is a term used by several Northeastern Woodland Native American tribes, especially the Haudenosaunee or Iroquois Confederacy, for the continent of .

The name is used today by many Native tribes, Native rights activists, and environmental activists, especially since the 1970s when the term came into wider usage. In a later essay, published in At Home on the Earth, Gary Snyder claimed this title as a term referring to that synthesizes both indigenous and colonizer cultures by translating the indigenous name into the colonizer's languages (the Spanish "Isla Tortuga" being proposed as a name as well). Snyder argues that understanding under the name of will help shift conceptions of the continent.

Referring to North America as Turtle Island suggests a view of North America not merely as a land "discovered" and colonized by Europeans and people of European descent, but as a land inhabited and stewarded by a collection of rich, diverse, and civilized peoples. a collection that may have room for both indigenous and colonizer cultures. This re-framing of the continent's identity is intended to bring about a better cohabitation of these two groups of people.

Finally... the term suggests to some interpreters a more holistic relationship between the continent's ecology and its human inhabitants, visualizing as an amalgamation of bioregions. 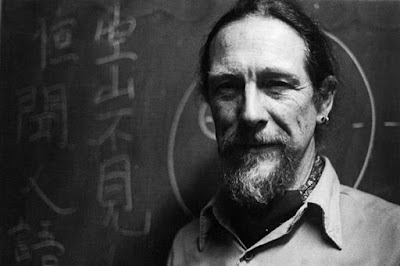 “I hold the most archaic values on earth ... the fertility of the soul, the magic of the animals, the power-vision in solitude.... the love and ecstasy of the dance, the common work of the tribe.”

“Find your place on the planet. Dig in, and take responsibility from there.”