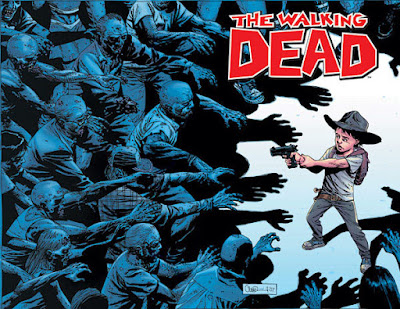 It was never my intent to get sucked into ’s adaptation of Robert Kirkman’s comic book series The Walking Dead… but upon an enthusiastic recommendation by my first-born, I tuned in shortly after last season’s premiere. The TV series roughly follows the plot of the comic book. Southern Sheriff wakes up from a coma to find himself a survivor in a Zombie Apocalypse. That pretty much brings the un-initiated reader up to speed.

What makes the series compelling isn’t the gore and goo of the “walkers” (the term zombie isn’t used) but rather the questions raised of what it means to be “human” in a world gone zombie. What is it that makes us any different from the advancing creatures? How do we retain your moral and spiritual integrity when faced with un-human (inhumane) hoards?

One might ask: From whence did these hoards come?

Zombies come from the (not where Voodoo comes from) where the word, “nbzambi” refers to their primary sprit and/or refers to one’s soul. When the Trans-Atlantic slave trade mixed peoples from all over the , the zombie found a new home in Voodoo. There are actually four types of zombies in Voodoo; the Great Spirit, the Spiritual Soul, the Herbal Zombie and the Bargained Zombie.

The word zombie (in Haitian it is "zombi") means "spirit of the dead." Voodoo folklore contends that a Bokor, or Voodoo priest that is concerned with the study and application of black magic, possesses the ability to resurrect the deceased through the administration of coup padre. Coup padre is a powder that is issued orally, the primary ingredient of which is tetrodoxin, the deadly substance of the notoriously poisonous fou-fou, or "porcupine fish." 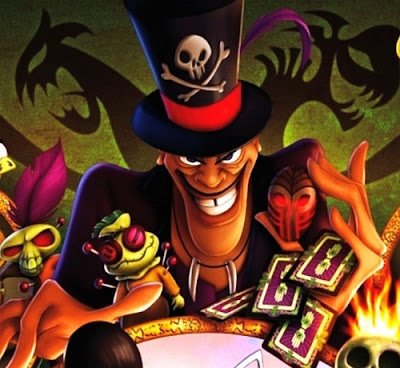 According to legend, a person who has annoyed his/her family and community to the point that they can no longer be tolerated is dealt with by hiring a Bokor to turn them into a zombie. Once they have been issued the coup padre, the subjects being prepared for their descent into zombie-dom would appear to die insofar as their heart rate would slow to a near stop, their breathing patterns would visibly subside and their body temperature would significantly decrease.

The unsuspecting would think that the person was dead. Family would bury him/her as if they were a corpse. Later, they would then be exhumed, still alive, by the Bokor and, although their physicality remained intact, their memory would be erased and they would be transformed into mindless drones. "Though still living, they would remain under the Bokor's power.

Contemporary Voodoo believes in the existence of one supreme God (Bondye), a very abstract, omnipotent yet unknowable force. Below this almighty God, Spirits or Loa rule over the world's affairs in matter of family, love, happiness, justice, etc. Contrary to popular belief, Loas (also referred to as Mystères and the Invisibles) are not deities in and of themselves, but rather act as intermediaries between Bondye (Bon Dieu, or good god) the Creator, who is distant from the world, and humanity.

Offerings are made to the appropriate Loa to ensure success in specific areas. Each Loa has its preferred fruits or vegetables, color, number, day of the week, etc. The Loa also manifest through elements of nature such as the wind and rain, lightning and thunder, the river, the ocean, the sky, the sun, and certain animals. 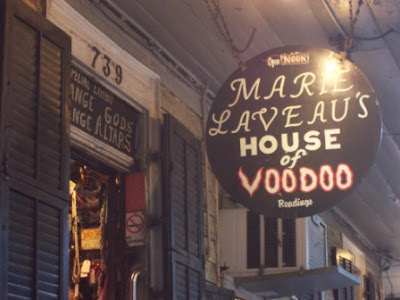 Li Grand Zombi (also known as Damballah Wedo) is a major Loa of worship among New Orleans Voodooists. Li Grand Zombi is the snake spirit in Voodoo, derived from the Congolese name for the same principal entity. The snake used by the renowned voodoo practitioner, Marie Laveau was said to have been called “li grand zombi.” The mud snake used in rituals is sometimes called “ouncongo.”

The current fascination with all things zombie is a revealing trend in contemporary pop culture. The zombie obviously strikes a nerve within our collective unconscious. But what is it exactly that shuffles about, moaning in the dark, just below the surface of our consciousness? Are the un-dead hoards symbolic of mindless consumerism? Are these creatures lurking just beyond our under-protected borders, ready to pour through a break in the fence… in mass… to prey upon the unsuspecting? Are these the failed product of our under-funded schools… mindless methamphetamine monsters… slowly closing in? Surely these slack-jawed amblers are not representative of a zombified population, blindly accepting politics as usual… following the bidding of Bokor politicians?

Zombies have indeed invaded our collective psyche. It is clear that a zombie can represent the Jungian shadow. That which is repulsive, rejected and repressed within each of us. Jung wrote that everyone carries a shadow… and the less it is embodied in the individual's conscious life, the blacker and denser it is. In this regard, we have met the zombie and they are us. But what of the current popularity of the zombie apocalypse?

Mass media reflects the consciousness of the culture in which it is generated. Is the current zombie invasion indicative of a culture in decay… a society spiritually bankrupt and consumed by violence? Unlike ’s nuclear Godzilla archetype… a great strange "other" bringing death and destruction to the innocent… zombies are a manifestation of the personal and collective shadow of a society that is capable of perpetuating such devastation. Zombie hoards mark a civilization-ending event.

Early in the “Occupy Wall Street” movement, protesters dressed like zombies with dollar bills spewing from their mouths. This creative (if not melodramatic) image was captured by the press and broadcast around the planet. What a poignant visual meme that was! It encapsulated and demonstrated to the world a very complex realization in ’s social development. Recognizing the zombie within our culture is the first step toward understanding, addressing and ultimately integrating the collective shadow.

These are the first steps toward avoiding the "zombie apocalypse." Recognition of the inhumane consequences of the rise of globalization and corporate malfeasance is the first tentative movement toward healing that which infests our culture.

This is also a time of reckoning. We must put right these things in order to survive and grow as a culture. The beauty in all this is… we are up for the task. We may suffer some growing pains, but the effort will be well worth it. We owe it to our kids.
Posted by Jack Heart at 11/23/2011 01:01:00 PM

To embrace our shadow is to know oneself. That does not mean one needs to run with the devil, just be aware of ones darkside. All of us have one. The new paraidgm involves the yin and yang, thank goodness. Dennis

Jung referenced the zombie among the images of the shadow. The zombie expresses that which is the most unpleasant aspects of ourselves... hence the goo and rot...