Deep within the heart of South America… bordering Venezuela, Brazil and Guyana… rising out of the dark and mysterious jungle more that 9,200 feet… the mist-hidden Mount Roraima abruptly emerges. This majestic mesa or “Tepui” (an indigenous term for a flat-toped mountain with vertical sides) is the highest mountain in the Pacaraima Mountains. The mountain is part of Venezuela’s Canaima National Park, a UNESCO World Heritage Site. 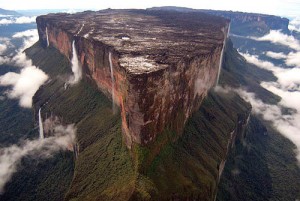 Mount Roraima is a mountain climber’s paradise with all routes besides the Paraitepui route requiring technical climbing gear. Monte Roraima was the first of the Tepuis to be climbed and the credit goes to English botanist Everard Im Thurn on an expedition sponsored by the Royal Geographical Society in 1884. It was his subsequent lectures in England that are believed to have inspired Sir Arthur Conan Doyle's book "The Lost World".

Modern day adventurers and seekers of the paranormal will not be disappointed with an expedition to Mount Roraima. Roraima is known for its incredibly high frequency of UFO sightings, both atop and around the plateau. Once travelers embark upon the journey, the mundane is left behind. Roraima becomes another world and strange things happen up there. Unexplainable twirling lights spotted by tourists on numerous occasions hover above or between Roraima and another nearby tepui, Kukenaam. 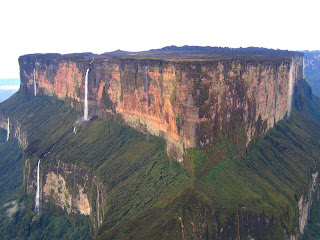 Many unsuspecting tourists are known to experience altered states up on Roraima. Mesmerized by the euphoria of the summit, some go leaping about the rocks. Women in particular, perhaps channeling the Amazonian Goddess, often experience intense feelings of reverie and at times promiscuousness. Susceptible men have reported being startled awake by bizarre dreams involving extra-terrestrials…

It is a six day trek to the plateau. The trailhead begins near the village of Paraitepui, in the Grand Sabana not far from the Brazilian border. The protruding sandstone that makes up Roraima is estimated to be an astounding 1.8 billion years old, making it one of the oldest geologic formations on Earth. Sir Walter Raleigh is accredited as the first European to see them in 1595, when he described Roraima as a “mountain of crystal.”

One intrepid explorer, David Joshua Jennings wrote the following about his experiences atop Roraima… 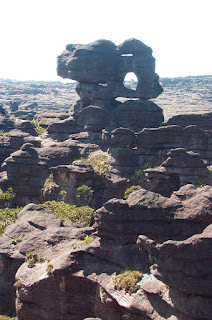 “Upon reaching the summit, the environment up top is otherworldly, with giant craggy boulders carpeted in moss, black craters and steaming fissures that stretch as far as the eye can see. There is an ever-present, eerie fog out of which bizarre rock formations appear and disappear, shaped like mushrooms, elephants, flying turtles and cathedrals. Everywhere are pools, trickling streams and beaches of pink sand. Among fields of scattered crystals rise crooked, withered trees and drooping orchids. Purple carnivorous plants sprout among hundreds of miniature pastel flowers."

"I would assert that I am (probably) not insane, nor would I believe any story of paranormal activity without experiencing it myself, but up on top of Roraima… things are downright spooky. There is a constant feeling that you are being watched, or that you are interacting with invisible beings. I survived Roraima without being abducted. Although I did not see any aliens, I cannot help but feel I encountered something. Even now I get goose bumps when I think of that mysterious, lost world.”

Indigenous Cosmology
Mount Roraima has been studied by botanists, zoologists, geologists, herpetologists, orchidologists and ecologists, but it is the anthropologists that have shed light on the mystery that is Roraima. One indigenous tribe, the Pemon, tell an ancient tale of their creation which includes a deluge myth. The great flood motif is a global phenomenon. 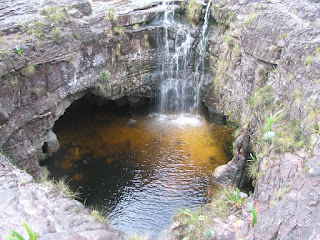 Before the dawn of time, the Pemon people were the descendants of the mythic Hero, Macunaíma. While exploring the primordial world, Macunaíma came across the Wazacá tree – tree of life – in whose branches grew all the types of cultivated and wild plants eaten by the people. Macunaíma therefore chopped down the trunk – Piai – of the Wazacá tree, which leaned towards the northeast. Hence all the edible plants found today fell in this direction, especially in the areas covered in jungle.

From the trunk of the Wazacá tree spouted a torrent of water, which caused a great flood during this primordial period. According to the myth, this trunk remains still: this is Mount Roraima, whence flow the rivers that pass through the traditional territory of these peoples. This also gives insight into the naming of Angel falls, which cascades from Roraima’s summit.

The myth thus tells of the origin of agriculture and humanity, as well as touching upon another universal and powerful creation symbol, the tree of life. Thus does Mount Roraima take its place as one of the most mysterious and sacred places on Earth… Mount Roraima – Sacred Mountain.

Unknown said…
THANKS FOR ALL THE INFO ABOUT MOUNT RORAIMA..I WISH I COULD ALSO FEEL THAT GOOSE BUMPS SOME DAY..DESPERATELY WANNA GO THERE..
May 20, 2013 at 1:40 AM