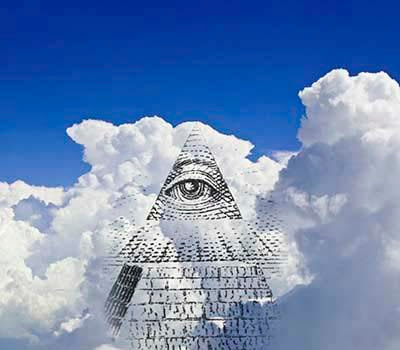 Much has been said lately concerning the wonders of “Cloud Computing” and the future of a globally centralized data bank in the sky. With the launching of Apple’s iTunes 10.3 beta (aka: “iTunes in the Cloud”), now available for use on your computer, iPhone, iPad, and iPod touch, wide acceptance of cloud computing is assured. Every day, susceptible users move their computing lives from the desktop to the cloud and trust in hosted web applications to store and access email, photos, and documents. But this new electronic frontier involves serious risks that aren't obvious to the over-trusting user.

Cloud computing is concurrently seeping into IT organizations and companies, often without any "official" approval or strategy from upper management, but with the undeniable momentum of a run-away locomotive. Corporations have been sold on this concept (read: bill of goods) as a way to reduce cost and improve IT flexibility. But, just as in the case of the individual user, the use of cloud computing within the corporate structure also carries with it security risks, including perils related to compliance, availability, and data integrity.

Users beware! The growing number of people and corporations opting to move their data off their own computer systems and storing that information on internet-accessible servers rather than on their own machines is a core strategy of domination and control being covertly and ruthlessly implemented by none other than those masters of deception and subterfuge… the Illuminati. Yes, those rascally rabids the Illuminati have reared their ugly heads once again.

As millions of people now upload personal data such as emails, photographs and, increasingly, their work, to sites owned by “third parties,” they are voluntarily giving up autonomy over their own data. And isn’t that just how the Illuminati operate… executing a sinister strategy that facilitates the individual giving up his/her personal control freely, unaware of the coercion being imposed upon them? Diabolically brilliant!

In an interview with Bobby Johnson at the gaurdian.co.uk, Richard Stallman (founder of the Free Software Foundation and creator of the computer operating system GNU) said that cloud computing was simply a trap aimed at forcing more people to buy into locked, proprietary systems that would cost them more and more over time.

"It's stupidity. It's worse than stupidity: it's a marketing hype campaign," Stallman, who is a staunch privacy advocate, advised users to stay local and stick with their own computers.

"One reason you should not use web applications to do your computing is that you lose control," he said. "It's just as bad as using a proprietary program. Do your own computing on your own computer with your copy of a freedom-respecting program. If you use a proprietary program or somebody else's web server, you're defenceless. You're putty in the hands of whoever developed that software."

Putty in the hands indeed. Here is an excerpt from a recent article at LifeHacker (suspect in their own right), outlining but a few examples of existing transgressions by those using this questionable technology…

-   Facebook launches Beacon, an advertising mechanism that collects and publishes information about what you do on external web sites on your Facebook profile (only to apologize and offer opt-out later).

-   Apple denies approval for the Google Voice application in the App Store.

-   Facebook (and Myspace) doesn't immediately remove photos from their servers when you delete them.

When you're living in the cloud, you're beholden to a third party who can make decisions about your data and platform in ways never seen before in computing…

So there you have it. It is quite likely that Cloud Computing is a wolf in sheep’s clothing. Don’t let “them” erode the freedoms we have all come to take for granted in the information age. Don’t allow the power that is a free internet to slip from the hands of the many into the waiting hands of the few. And for goodness sake, don’t give these powerful freedoms up voluntarily.

Disclaimer: The views expressed in this guest commentary do not necessarily reflect the views of Tek-Gnostics and its affiliated stations… but then again... they might!
Posted by Jack Heart at 7/18/2011 02:02:00 PM

Thanks agent 23 for the heads up. However those auto-bots of a government nature are more interested in someones profiles and online habits than the rascals the illumaniti. Most of their cabal is hidden from view and passed on with milkshakes(new form of handshake). Shineforth brave souls. Dennis

A vanilla shake, no doubt... No diversity there!

I was reading your article and wondered if you had considered creating an ebook on this subject. Your writing would sell it fast. You have a lot of writing talent. cloud computing