Indigenous peoples of the Pacific Northwest recognized Mount Shasta as a place of such immense grandeur and power that its existence could only be attributed to the Great Spirit, or Creator. The mountain, therefore, was also many tribes’ spiritual center: it was held to be the Great Spirit’s wigwam. The smoke and steam seen as the summit was the smoke-hole of the Spirit’s lodge, as well as the entrance to the Earth. Native American legends connected the material and spiritual worlds and described the powerful natural forces that people witnessed in their environment.

These indigenous mythologies are consistent with other myths of dwellers within Mount Shasta, such as the legend of a mystical brotherhood of lemurian adepts believed to roam through jeweled corridors deep inside the mountain. Taken together, these Shasta myths… both native and non-native… are in turn consistent with other mythologies of spirit folk or fairies living within the Earth, Hollow Earth theory, as well as legends of a “Brotherhood of Ascended Masters.” Mythologies such as these can be found the world over and throughout history, with each culture or civilization having it’s own unique version of the larger, archetypical mythos.

One very special mythos, found the world over, is the legend of the “Deluge” or great flood. This story typically involves divine intervention with it’s/their intention to preserve the myriad of terrestrial species. Additionally, the Shasta flood myth involves Coyote, the ubiquitous trickster character, which in many cultures is associated with the acquisition of technologies, such as the ancient Greek Prometheus stealing fire from the Gods. The following myth not only illustrates the “Deluge” but also the concept of an ancient proto race or “Ultraterrestrials” upon the Earth and living as companions or stewards along side humans…

Mount Shasta & the Great Flood
The Indians of the Pacific Northwest, and those of some other areas also, believed that before the first Indians were created, the world was in habited by a race of animal people. In some tribes, chiefly between the Rocky Mountains and the Cascade range, the shrewdest and most powerful of those people was Coyote. What follows is a flood myth from the Shasta people…

Once Coyote was traveling around, carrying his bow and arrows with him. He came to a body of water where an evil spirit lived. Seeing Coyote, the evil spirit rose out of the water and said “there is no wood.” Then the evil being caused the water to rise and overflow the land until Coyote was covered.

After a time, the water went down and the land dried off. Coyote sprang up, took his bow and arrow and shot the evil spirit. Then Coyote ran away.

Badger, Porcupine, and Raccoon saw the fire and swam to it. Fisher, Wolf, and Mountain Lion swam there. All the animal people stayed on top of Mount Shasta until the great flood was over. At last the water went down, leaving dry land in the midst of lakes and marshes.

This story not only incorporates all of the elements of the “Noah & the Ark” mythos, including the flood and subsequent refuge upon a grand mountaintop, but the preservation of all the animals of earth. It also incorporates intervention/communication with the higher powers, as does the biblical version. Of interest in the above story is the “Evil Water Spirit” that pursues Coyote. This is reminiscent of the Naiads or the Sirens… or even amphibian aliens of modern mythology.

Psychologically speaking… the symbol of water could correlate with the “collective unconscious” welling up to engulf humanity. 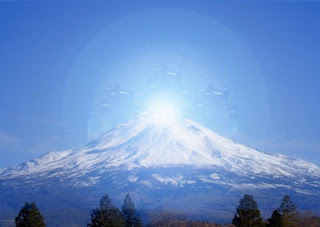 Many scholars believe that the great flood, found in the bible, was taken from a much older version found in “The Epic of Gilgamesh” considered to be Humanity’s oldest written story. The Gilgamesh story is that of the quest for immortality. Scholars link this epic to the Epic of Atrahasis, which Stephanie Dalley, in her book entitled "Myths from Mesopotamia," mentions the similarity of the name Atra-Hasis to that of Prometheus (“Forethinker”), father of the Greek Deluge hero Deucalion.

Interestingly, and as pointed out in an earlier post, the Gilgamesh story not only includes a flood myth… it also features a Wildman character, known in Pacific Northwest legend as… Bigfoot. The enduring myth of Bigfoot is considered credible by many, even to this day.

Is it a coincidence that the Pacific Northwest’s Bigfoot creature lurks around Mount Shasta… home of the Lemurians, just as his Asian cousin, the Yeti lurks around the Himalayas... home of the Ascended Masters?
Posted by Jack Heart at 6/10/2011 10:52:00 AM

Love seeing the north face from my mothers house in Klamath falls. Climbed said mountain in 1979. What a jewell.Keep a saphire in your mind. Agent 87

I experienced many mysterious phenomena while climbing the North face of Shasta. Of the many “events” that occurred, my favorite was… while hiking up a dry creek-bed, we heard a low rumbling sound. Suddenly, the creek began to flow. Not just a trickle… the entire creek-bed was filled to capacity by rushing water. Where once there was no water… now there was a full creek.

Although we were climbing in July, weather blew in and we didn’t summit. That night in camp, we speculated on the causes… snow melt… and other such “natural explanations.” We settled on the notion that the Lemurians were releasing their municipal/agricultural discharge.

There I was, climbing the sacred mountain in the dead of winter with about 12 others from Klamath falls , lordy,lordy the climb was daunting, ice crystals were everywhere in the wind. My friend Gary and I decided to turn back after our facess were cut by the high velocity ice crystals, soon after the rest of the expidition turned tail as well. The mountain wins another one. Shasta is a tough climb. So much mountain to embrace. Shineforth brave souls! Dennis

is it just me or does anyone else see the castle that is outlined over the mountain in the photo above?

In the early 1900’s, Dr. Edgar Lucin Larkin of the Mt. Lowe Observatory saw a strange phenomenon with his telescope. He was searching for an object on the earth, the distance from which was known, by which to calibrate his instrument. In looking through the telescope, supposedly placed parallel to the earth’s surface, he finally brought Mount Shasta into range. Around the foothills of the mountain and at about 30 miles from the mountain Dr. Larkin reported seeing a shining metal object, which, on focusing, turned out to be a massive oriental temple. At a later date, in order to check these observations, Dr. Larkin saw a number of shining white marble temples in Greek style. At night he could see lights in the vicinity…

Here's an amazing new book exposing some of the myths about Mount Shasta, specifically Lord Adama, the underground city of Telos and Sananda: swww.smashwords.com/extreader/read/155375