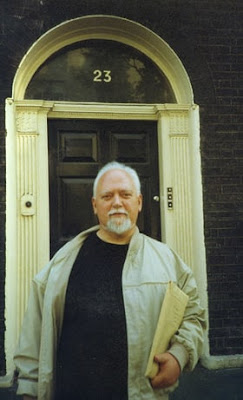 There's Nazis in the Bathroom, just below the stairs...
Nobody told me there’d be days like this… strange days indeed!

The first decade of the 21st century has been one tumultuous ride, for sure. We have gone from a sleepy supply-side global economy… to a brave new world of religious jihad driven politics. Beginning in 2000 when the US presidential election was stolen decided… by the Supreme Court, events have been cascading toward unprecedented novelty… what Terrence McKenna labeled Timewave Zero.

A quick list of these events includes: The modern-day of infamy… 9/11, US imperialistic expansion in Afghanistan & Iraq (war on terror), global warming & a multitude of “Earth Changes” such as hurricane Katrina, and global financial meltdown. A couple of other interesting developments were… the emerging of the internet & social media as a primary journalistic instrument, the mapping of the human genome and the concept of Singularity.

What these events point toward feels like a 2012-esque, game-changing moment in Earth’s space-time continuum. The French philosopher and Jesuit priest, Pierre Teilhard de Chardin labeled this moment… the Omega Point. Sprinkle in the speculation of an impending Disclosure Event (for flavor!) and you get a wild mixture of collective anticipation.

What follows are some excerpts from Robert Anton Wilson’s 1977 book, The Cosmic Trigger. Obviously, none of the above events had transpired at the time of publication… 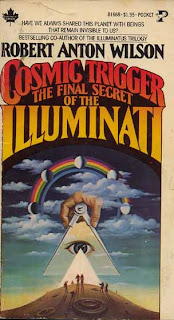 My book review desk at the San Francisco Phoenix the next day had a volume entitled The Day the Dollar Dies by somebody named Willard Cantelon. Flipping through it, I saw that it was about my old buddies, the Bavarian Illuminati.

I read Mr. Cantelon's version of the Illuminati Conspiracy with some interest. It appears that the Illuminati are currently plotting to wreck the international financial system and cause the disruption or fall of all the strong governments in the world. When chaos is complete, contact with Higher Intelligences in outer space will be announced.


But, says Mr. Cantelon, these Higher Intelligences are actually Satan and his fallen angels, who will appear on Earth as superhuman and benign beings; the masses will accept them as saviors, not recognizing their Evil Nature; and then we are done for. Satan will institute One World Government and One World Religion—those twin bugaboos of the extreme Right—after which money will be abolished and a computerized credit system will come into effect everywhere.

Everybody will be tattooed on the forehead and wrist with a credit number, and every "purchase" will consist only in having the numbers scanned by computers placed in every store or bank. This is the key to a tyranny that can never be resisted because any rebel will merely have his credit cut off, and will be unable to buy food, clothing or shelter.

Again… this was written prior it’s publication in 1977. It is a classic paranoid conspiracy/eschatological interpretation of future events as seen/prophetized in the late 20th century. Given what has transpired since then, there are some strange parallels between Cantelon’s vision and how events actually came down… or at least our understanding of how they came down.

Elsewhere in the Cosmic Trigger, there is another interesting passage pertaining to the illumination of individual knowledge, as perceived by earthling humans…

Grady McMurty nodded vigorously. "That's the $64,000 question," he said emphatically. "For years I've been asking Phylis and everybody else I know: why does the gnosis always get busted? Every single time the energy is raised and large-scale group illuminations are occurring, the local branch of the Inquisition kills it dead. Why, why, why?" Nobody had any very conclusive ideas. "I'll tell you what I think," Grady said. "There's war in Heaven. The Higher Intelligences, whoever they are, aren't all playing on the same team. Some of them are trying to encourage our evolution to higher levels, and some of them want to keep us stuck just where we are."

The above are peculiarly interesting musings to the deranged minds at Tek-Gnostics. They are meant to be considered for entertainment purposes only… Do not try this at home. Still… one thing we can be sure of is… the truth is stranger than fiction.

Cosmic triggers indeed! No Nukes need I say more? What extreme tomfoolery! Tell the children the truth! I am boiling hot mad about this man made disaster.(Terra firma is just doing her job) Dennis, who was without electrical power for 3 days because of an divine wind.