Confessions of a Skeptical Believer...

I was born and raised in the Pacific Northwest, an amazing and ancient repository of relatively untouched natural diversity and resource. I have spent a good part of my life on either the northern or the southern drainages of the Siskiyou Mountains. The Siskiyou mountain range forms a wild and mysterious barrier between the watersheds of the Klamath River in northwestern California and the Rogue River in southwestern Oregon.

The Klamath-Siskiyou eco-region is a world-renowned hub of biological diversity. The rugged terrain that defines this region is some of the most spectacular and inaccessible areas in North America. Ominous, sharp-edged mountains… contrasted with wild, salmon-strewn rivers inspired early explorers and geologists to title the ancient KS Mountains as the “Klamath Knot."

The Klamath Knot contains the largest concentration of intact watersheds, roadless wildlands and wilderness areas to be found in the lower 48. For all its great antiquity, the Klamath Knot has never been subject to volcanism and glaciation like the neighboring Cascade and Sierra Mountains. Rather, this unique east-west range is a result of a massive geologic batholithic upheaval. This intricate tangle of ancient rocks produces a variety of soils which support the large diversity of plants species famous in this region. Because the Siskiyous trend east and west rather than north and south, it holds a floral species diversity that ranges from coastal Redwood to ponderosa pine.

Since this region remained largely unglaciated during the last Ice Age… when most of the continent was under ice… the Klamath Knot acted as a refuge or “Biological Ark” for thousands of plants and animals found nowhere else on Earth. This amazing and ancient repository of genetic diversity is one of Earths true treasures. In addition to the multitude of known and cataloged flora and fauna that call this expanse home, there is in addition at least one legendary creature dwelling within the Klamath Knot that has for millennium escaped category.

The megafaunal specimen in question has been known by many names throughout the Pacific Northwest… Skoocoom, Sasquatch and most famously… Bigfoot. 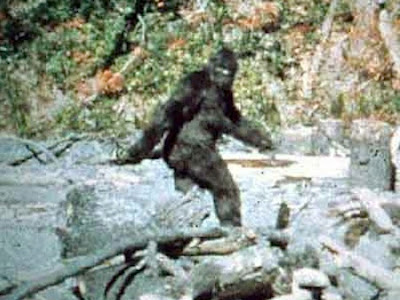 Bigfoot is an alleged humanoid creature whose range extends within remote forests in the United States and Canada. It is considered to be a cryptozoological creature and is often described as being a large, bipedal animal. It is said that it's relatives can be found around the world with such names as the Yeti, the Yeren, the Almas, the Yowie and many more.

Bigfoot is described in reports as a large hairy ape-like creature, ranging between 6–10 feet tall, weighing in excess of 500 pounds, and covered in dark brown or dark reddish hair. Alleged witnesses have described large eyes, a pronounced brow ridge, and a large, low-set forehead; the top of the head has been described as rounded and crested, similar to the sagittal crest of the male gorilla. Bigfoot is commonly reported to have a strong, unpleasant smell by those who claim to have encountered it. The enormous footprints for which it is named have been as large as 24 inches long and 8 inches wide. While most casts have five toes—like all known apes—some casts of alleged Bigfoot tracks have had numbers ranging from two to six. Proponents have also claimed that Bigfoot is omnivorous and mainly nocturnal.

The scientific community is generally skeptical about the existence of Bigfoot, as there is little physical evidence supporting the existence of the creature. Proponents assert that the scientific community's attitude towards Bigfoot stems primarily from insufficient evidence. Anthropologist David Daegling echoed this idea, citing a "remarkably limited amount of Sasquatch data that are amenable to scientific scrutiny." He advises that mainstream skeptics take a proactive position “to offer an alternative explanation. We have to explain why we see Bigfoot when there is no such animal."

Anthropomorphic symbols of the unconscious abound in Jungian psychology: The Hero, the Great Mother, the Wise Old Man, the Trickster and, significantly within our context… the Wildman. The Wildman archetype has a global appeal in that it represents primordial energy and freedom. This Wildman or “natural man” archetype is a reminder of where we have come from… of humanity’s initial, wild and innocent state.

The Wildman has always been present in human mythology. In humanity’s oldest known book, The Epic of Gilgamesh, a key figure is the Wildman, Enkidu. In the story he is a wild-man raised by animals and ignorant of human society. A series of interactions with humans and human ways bring him closer to civilization, culminating in a wrestling match with Gilgamesh, king of Uruk. Enkidu then becomes the king's constant companion, accompanying him on adventures until he is stricken ill. The deep, tragic loss of Enkidu profoundly inspires in Gilgamesh a quest to escape death by obtaining godly immortality.

An encounter with Bigfoot… in the wilds of the Pacific Northwest… becomes an actual encounter with our own wild, untamed past, or more importantly, a face-to-face with the Wildman within. The existence of Bigfoot is essential to humanity, for it acts as a reminder of who we were before we became domesticated primates. Bigfoot serves as a personification of our primordial and prehistoric freedom. Jung’s Wildman archetype has become charged with significance and is now standing before us in the murky shadows of the primordial forest that is our mind, ready to release its potential upon our recognition and subsequent invocation. In these high-technological times we find ourselves living in, the need for the existence of Bigfoot has never been greater.

Personally, I believe in Bigfoot. I have seen many strange and mysterious things through-out my travels in the forests of the Pacific Northwest. More than once I have felt the thrill of uncertainty upon hearing a crashing sound just up the trail from where I stood. More than once I have had my hackles stand up in the middle of the night… in a remote camp… where my imagination took command of my reason.

In the final analysis… within my worldview… if Bigfoot doesn’t exist… he ought to.

Actually, the Klamath Mountains (the Siskiyou is one range within the mountain region aka "the Klamath Knot") are glaciated. However, it was not covered by the continental ice sheet. Instead smaller glaciers occupied mountain slopes pushing up moraines. A few small glaciers remain on the region's highest peak - Thompson in the Trinity Alps Wilderness. When the glaciers retreated they left behind the many lakes that dot these mountains.

As for Bigfoot, the creatures are mentioned in legends of the Karuk People/Tribe. They had stories about little people too.

Thanks for the clarification on the glaciers in the Siskiyous…

What about the Eddy Mountains down by Mt. Shasta? Every time I look at those Mtns (especially going south over the Siskiyou pass) with Shasta to their left, it is as if I am looking at the Himalayas…

Speaking of the Himalayas… they are the home of the Yeti… the Tibetan version of Bigfoot.