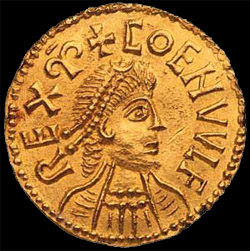 British archaeological experts say an amateur treasure hunter roaming English farmland with a metal detector stumbled upon the largest Anglo-Saxon treasure ever discovered. Anglo-Saxon expert formerly with the British Museum's Department of Prehistory and Europe, Leslie Webster, says the 1,500-piece find is on par with the Book of Kells, one of the best-known illuminated manuscripts in the world. The experts say the trove includes covers for the ends of swords and hilt plates. Many of them are gold inlaid with precious stones.

The collection of 1,500 gold and silver pieces, found by Terry Herbert in Staffordshire, may date to the 7th century, is unparalleled in size and worth “a seven figure sum”. It has been declared treasure by South Staffordshire coroner Andrew Haigh, meaning it belongs to the British Crown. Terry Herbert, who found it on farmland using a metal detector, said it “was what metal detectorists dream of”. It may take more than a year for it to be valued. The treasure will revolutionize understanding of the Anglo-Saxons, a Germanic people who ruled England from the 5th century until the Norman conquest in 1066. The Mercian rulers at the time are likely to have been pagan, so this will help archaeologists look back at the dark ages, and those historical figures, with more scrutiny than ever before. The Dark Ages were called the Dark Ages because it was seen as a period where, after Roman civilization, somehow culture of the era went backwards in time.

The Staffordshire Hoard organization will not reveal the exact location of the find, to prevent looting, but says it "lay at the heart of the Anglo-Saxon Kingdom of Mercia" in an area now known as South Staffordshire. "The quantity of gold is amazing but, more importantly, the craftsmanship is consummate," said archaeologist Kevin Leahy, who cataloged the find. "This was the very best that the Anglo-Saxon metalworkers could do, and they were very good."

Terry Herbert (The Treasure hunter who discovered the trove) says he has a phrase he sometimes says as he is searching:

"Spirits of yesteryear take me where the coins appear."

"But on that day I changed coins to gold," he says. "I don't know why I said it that day but I think somebody was listening and directed me to it."