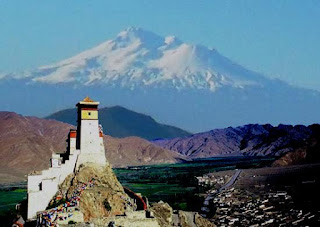 Mount Shasta, a 14,179-foot (4,322 m) stratovolcano, is the second-highest peak in the Cascade Range and the fifth highest peak in California. It is a member in the Cascade Volcanic Arc and is located in Siskiyou County, and has an estimated volume of 108 cubic miles (450 km), making it the most voluminous stratovolcano of the Cascades. Physically unconnected to any nearby mountain, and rising abruptly from miles of level ground which encircle it, Mount Shasta stands some 10,000 feet (3,000 m) above the surrounding area. 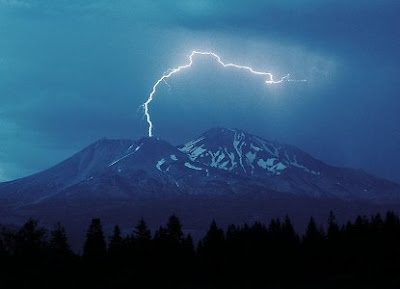 Native American lore of the area held that Shasta is inhabited by the spirit chief Skell, who descended from heaven to the mountain's summit. The indigenous peoples also have variations of a great flood myth, with Mount Shasta being the Pacific Northwest version of Mt. Ararat and the old trickster persona Coyote filling in for Noah… 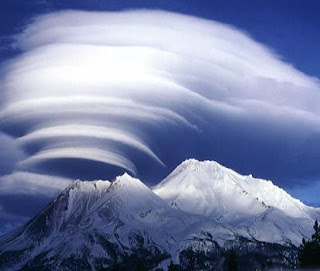 In recent times, many other faiths, particularly New Age groups, have been attracted to Shasta -- more than any other Cascade volcano. Mt. Shasta, California, a small town near Shasta's western base, is a focal point for many of these religions.

According to the Forest Service as reported in documentaries such as In The Light of Reverence, local Indian tribes, particularly but not limited to the Wintu, still practice healing rituals at the springs that flow from the mountain, and there is constant low-level conflict between the Indians and the New Age groups which have laid claim to the area as their personal sacred site.

The history of New Age fascination with Mount Shasta can be traced to the publication of Frederick Spencer Oliver's fantasy novel A Dweller On Two Planets. An indifferent, unmotivated student who was often ill, Oliver composed the novel at the age of seventeen. According to the foreword, his parents were awestruck that he could have engaged in such a sustained endeavor, and believed the novel to have been divinely inspired. They promoted it as a work of channeled wisdom, and it is still in print today. The novel is about the Lemurian race, who traveled to Mount Shasta when their continent sank beneath the ocean (Atlantis?) and are now said to live inside the mountain in a series of tunnels. 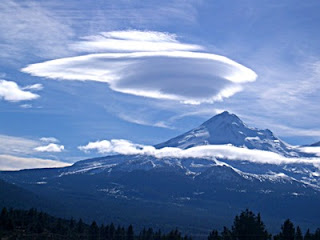 In the years subsequent to the publication of Oliver's book, many seeking people claimed to have encountered Lemurians at Shasta. These “close encounters” have successfully transitioned the ancient myths into modern ones. Spirit chief becomes Lemurian. It is not surprising that odd cloud formations atop Mt. Shasta have been connected with the UFO phenomena.

Among the above mentioned mythos, one fact is clear. Mount Shasta is an incredible place of power… rivaling any sacred site on the planet.

The last time I climbed Mount Shasta was on August 8th, 1988 (8/8/88). We left our base camp (Horse Camp) around 5:00am, taking the well traveled “Avalanche Gulch” route. By that afternoon we had reached the “Red Banks”, where the climb becomes more technical. From there it is a long, arduous trek up misery hill to the false summit, and finally to the true summit.

The trek was a “magical mystery tour” in many ways. One detail of the trip stands out… once we reached the top of the mountain, within minutes from the very top… I was amazed to see hot springs bubbling out of the ground, well above 14,000 feet. My first thought was… “Oh yeah, we are on top of a volcano… of course the spring would be hot!”

I highly recommend the trip for the intrepid adventurer.

Lemurians came from the lost continent of Mu...which was located in the Pacific Ocean. It's not as well known as Atlantis, but the mythos surrounding it is similar.

Tom Robbins, in his 1976 novel entitled “Even Cowgirls get the Blues” featured an old Asian Wiseman (Tek-Gnostic?) named, quite politically incorrectly, “The Chink”. The Chink grew up in a WWII stalag, or concentration camp located near the town of Tule Lake, California. That’s right, a concentration camp on U.S. soil. He escaped the stalag and moved into the caverns and tunnel systems beneath Mt. Shasta…

Wonder where he received his wisdom?

What fun it was going to the top. My friend Gary had some of the best colombian gold. Believe me I was as one with the Lumerians(light seekers) I am happy as hell that the Daily Grail picked up your article JP. The Shasta area is truly mystical. Lived on both sides of it 35 years of my life( Fall river Mills, California and Ashland and good ol Bonanza Oregon. Took some magic mushrooms (hodad crew planting 900 acers on the north face) In 1980? and looked for strange things in the lenticular clouds, had a wonderful day I did.! Shine forth brave souls!

Move away from my strong attachment Mt. Shasta. I lived off of Day Road, Mcarthur. I flew light balls at night and pulled them in in the day. I listened to the conversations and bursts of fire on high and low AM radio. Got lost and seeded a mountain artists don't look back. Now I have transformed my life to another meridian Cape Kennedy launch area. Imagine where we are now at. Positive power pulls some of us towards what needs to be done. Knowing what is corexit my time here is important. My thanks for all the effort to the ones in the U.S..NAVY for there insights and my landings here to make the difference of the unknown possible so that we all understand the wave deep space endlessviking has on our now