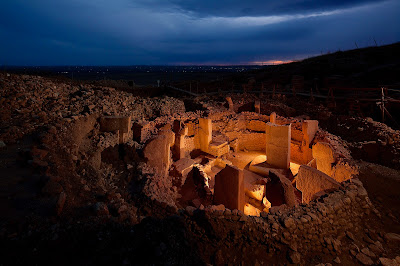 More of a mound, really... Göbekli Tepe is situated a few kilometers to the northeast of the modern town of  Şanlıurfa in southeastern Turkey. The tell is situated on the highest point of the Germus mountain range towering 750 m above the Harran plain. With a height of 15 m, the mound, which is completely artificial, is spreading on an area of about 9 ha, measuring 300 m in diameter. This immense ruin hill was formed of the debris of monumental constructions dating back to the 10th and 9th millennium B.C.E.

Göbekli Tepe was first recognized as an archaeological site during a large-scale survey project conducted by the Universities of Istanbul and Chicago in 1963. In his account of work in the Urfa province, Peter Benedict describes the site as a cluster of mounds of reddish soil separated by depressions. The slopes were clustered with flint, and he described what he thought to be two small Islamic cemeteries. The impressions of the survey team are mirrored in early aerial photographs of the site, taken before excavations started. The reddish-brown tell with its height of up to 15m and a diameter of 300 m is the only colorful spot on the otherwise barren Germuş mountain range.

Situated on the highest point of this geological feature, Göbekli Tepe is a prominent landmark at the edge of the Harran plain. The surveyors identified the materials at Göbekli Tepe as Neolithic but missed the importance of the site. Further research may also not have seemed possible because of the assumed Islamic graveyards. 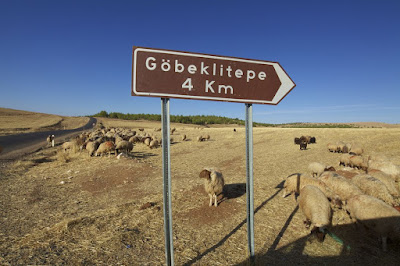 Between 1983 and 1991 large scale excavations, in fact, rescue excavations in advance of the construction of the Atatürk barrage, were under way at another important Neolithic site in the Urfa region, Nevalı Çori. Under the direction of Harald Hauptmann, a Neolithic settlement was excavated that had large rectangular domestic buildings often similar to Cayönü´s channeled buildings. However, excavations revealed also one building (with three construction phases) that was completely different from anything known before in the Neolithic of the Near East. Not only was a large number of monumental stone sculptures discovered, but the rectangular building itself had T-or Gamma-shaped pillars running along the walls, interconnected by a bench, and a pair of T-shaped pillars in the center. Due to the representation of arms and hands, these pillars could be understood as highly abstracted depictions of the human body.

Nevalı Çori was finally flooded by the Atatürk Barrage in 1991. But one of the members of the excavation team, Klaus Schmidt (1953-2014), wanted to find out whether there were more settlements like Nevalı Çori hidden in the Urfa region, with special buildings and elaborated stone sculpture. In 1994 he visited all Neolithic sites mentioned in the literature. Drawing on the experience gained at Nevalı Çori, Schmidt was able to identify the ‘tombstones’ at Göbekli Tepe as Neolithic work-pieces and T-shaped pillars. 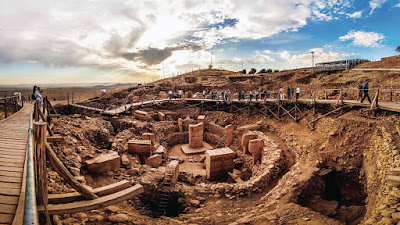 “October 1994, the land colored by the evening sun. We walked through slopy, rather difficult and confusing terrain, littered with large basalt blocks. No traces of prehistoric people visible, no walls, pottery sherds, stone tools. Doubts regarding the sense of this trip, like many before with the aim to survey prehistoric, in particular, Stone Age sites, were growing slowly but inexorably.

Back in the village, an old man had answered our questions whether there was a hill with çakmaktaşı, flint, in vicinity, with a surprisingly clear: Yes!. And he had sent a boy to guide us to that place. We could drive only a small part of the way, at the edge of the basalt field we had to start walking. Our small group was made up of a taxi driver from the town, our young guide, Michael Morsch, a colleague from Heidelberg, and me. Finally, we reached a small hill at the border of the basalt field, offering a panoramic view of a wide horizon. Still no archaeological traces, just those of sheep and goat flocks brought here to graze. But we had finally reached the end of the basalt field; now the barren limestone plateau lay in front of us.

On the opposed hill a large mound towered above the flat plateau, divided by depressions into several hilltops. Was that the mound we were looking for? The ‘knocks’ of red soil Peter Benedict had described in his survey report, Göbekli Tepe, or to be more precise, Göbekli Tepe ziyaret? When we approached the flanks of the mound, the so far gray and bare limestone plateau suddenly began to glitter. A carpet of flint covered the bedrock, and sparkled in the afternoon sun, not unlike a snow cover in the winter sun. But this spectacular sight was not only caused by nature, humans had assisted in staging it. We assured ourselves several times: These were not flint nodules fragmented by the forces of nature, but flakes, blades and fragments of cores, in short artifacts.

Other finds, in particular pottery, were absent. On the flanks of the mound the density of flint became lower. We reached the first long-stretched stone heaps, obviously accumulated here over decades by farmers clearing their fields […]. One of those heaps held a particularly large boulder. It was clearly worked and had a form that was easily recognizable: it was the T-shaped head of a pillar of the Nevalı Çori type.”

- the above was taken from: The Tepe Telegrams (News & Notes from the Göbekli Tepe Research Staff)

We’ve always assumed that after people begin farming, building cities, and generally settling down, religion evolved from tribal religion to what would become the organized religions of Sumer, Babylon, and Egypt, and eventually into their classical and modern offshoots. Göbekli Tepe tells us that’s wrong. Instead, organized religion came first. Then, because people gathered together, they began looking for ways to feed everyone. Necessity was the mother of the invention of agriculture… and of brewing. Göbekli Tepe has our first evidence of large-scale beer production.”

- John Beckett - from a review of Gordon White's: Star.Ships: A Prehistory of the Spirits 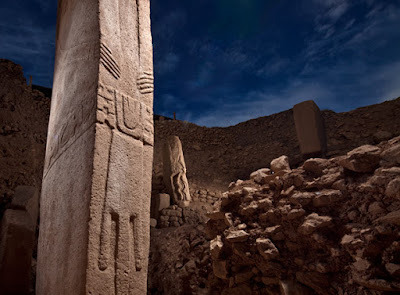 “The ancient einkorn wheat, found in the hills surrounding Göbekli Tepe, just happens to be the single genetic ancestor of every strain of wheat grown and eaten across the earth. People gathering at a temple on a hill to worship ‘heavenly beings’ were like passengers in an airport during a pandemic. Wheat, and what to do with it, spread to every corner of the land.”

“The discoverer of Göbekli Tepe and its chief excavator, Dr Klaus Schmidt, famously warned against what he called ‘Holy Land Syndrome,’ which is the propensity for archaeologists to head out into the field with a spade in one hand and a Bible in the other. Holy Land Syndrome precludes the finding of something you didn’t already expect to find.”

“The twenty first century offers us a new Holy Land Syndrome. There is still the spade in one hand, but the Bible has been replaced with a very selective reading of ‘On the Origin of Species.’ Science does not consider itself an ideology, as it claims to only deal with what is real. This is, of course, what every ideology thinks of itself.”

At Göbekli Tepe we can find depictions of creatures like armadillos, wild boars and geese animals not indigenous to the region. What is interesting is that located less than 350 Miles from Göbekli Tepe is the site many biblical scholars believe to be the resting place of Noah’s ark, so the animal carvings of Gobekli Tepe suggest a time in the region’s history when the indigenous animal population may have been of a totally different anthropological origin. Could Göbekli Tepe and Noah’s ark be connected in (some) way?

Some researchers theorize that the events of a cataclysmic flood and a story similar to that told of Noah’s ark was recorded on the stone pillars of Gobekli Tepe. If true, that would push the date of the great flood back to the end of the last ice age, far earlier than the biblical period. There are some incredible things about this mystical place but we still do not know the answers to some of the most important questions like, who built Göbekli Tepe? to what purpose? and how was Göbekli Tepe preserved until today?

Researchers point that Göbekli Tepe was “carefully” placed underneath the sand, the whole site was actually buried. Why would the builders bury such an incredible site? To protect it? to preserve it? Göbekli Tepe is regarded as an archaeological discovery of the greatest importance since it could profoundly change our understanding of a crucial stage in the development of human societies. “Göbekli Tepe changes everything,” says Ian Hodder of Stanford University. David Lewis-Williams, professor of archaeology at Witwatersrand University in Johannesburg, says that: “Göbekli Tepe is the most important archaeological site in the world.”

- from an article appearing in Ancient Code